The chances of a recession in the U.S. economy are great, but optimism is beginning to take hold. 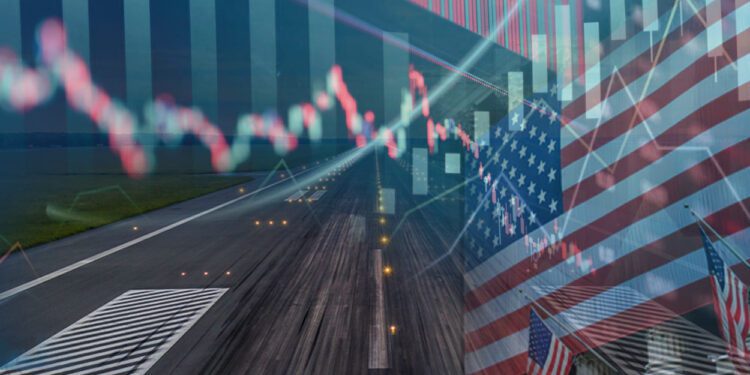 Entering the second half of last year, analysts and investors were convinced that a U.S. recession was imminent. The stakes were centered on the size and duration of the contractionary state of the U.S. economy. There were few cases that spoke of a soft landing, especially given the rising inflation in the U.S. at the time.

Although interest rate hikes began in March, inflation was not affected by the Fed’s tightening measures. Such strength in the rise of consumer prices in resisting the central bank’s prescription made Wall Street fear the worst. Calls for a possible soft landing by central bank officials were met with skepticism and even derision.

But developments over the last few months of the year seem to have radically changed the financial face. Inflation numbers are receding rapidly and the labor market looks to be in full retreat. Even during the month of December, wages fell beyond forecasts. In this sense, hope seems to be back on a board that until recently was totally pessimistic. However, a probable Goldilocks scenario, i.e. a Fed defeating inflation without damaging the economy, does not rule out the danger of recession.

Is a soft landing possible in the US economy?

The normality is to think that everything that happened in 2022 will lead the US economy into a recession or painful stagflation. The soft landing remains a bet of a limited, but growing number of analysts. As mentioned above, the root is in the labor market data and inflation that seems to be steadily receding.

Inflation over the last year ending in December retreated to 6.5%, indicating that the Fed’s actions are working. In that sense, central bank officials now have more credibility as their forecasts begin to take shape. Recently, Fed Governor Christopher Waller hinted that his prediction had been accurate, at least for the time being.

Such a situation leads the Fed to implement interest rate hikes with some moderation, as in the case of December. During the four immediately preceding Federal Open Market Committee (FOMC) meetings, rate hikes were 75 basis points. But in December, macroeconomic data allowed for an exception and a 0.5% increase. On February 1, a 25 basis point increase will probably be announced.

With these circumstances in mind, it must be said that the authorities seem confident about the possibility of a soft landing in the US. Consequently, had there been greater dangers, the hawks would not have allowed a moderation and even the possibility of additional interest rate increases would have already been announced.

As already stated, the danger of recession remains latent and any minor mistake by the central bank could lead to it. Likewise, a wage hike and a drop in unemployment could increase the long-term inflation forecast.

A soft landing would be ideal for financial markets, as inflation would be quickly brought back to the Fed’s 2% target. Also, by avoiding recession, it would allow a return to a growth path commensurate with the size of the world’s leading economy. The result would be an early interest rate reduction, which would favor industries dependent on the low cost of credit.

“The soft landing would be an event that could propel markets to the threshold of green numbers sooner than many expect.”

As such, employment and consumption would rise rapidly, driving retail liquidity into growth stocks and other risk assets. In other words, there would be a date in sight for a coming growth avalanche, leading investors to buy more confidently into financial assets in the face of the impending upswing.

In this way, the recovery would be much faster and those who do not react in time would miss out on the fruits of the bull market. As can be guessed, this would be an almost idyllic scenario for battered investors. It would be closer than ever and that mere possibility would be behind the recent green shoots in the major indices and in other sectors such as the cryptocurrency market.

Either way, the soft landing would turn out to be a boon for the US economy. However, there are many reasons to expect the worst. The latter means that the danger has not passed and many analysts warn investors not to sing victory in the face of the optimism generated by the current environment.

Taking for granted the warnings of some analysts such as Bloomberg’s Allison Shrager, the danger of recession is latent. In her opinion, a Goldilocks situation is not assured. She even goes further and argues that a possible soft landing would not be as soft as it sounds. He states that “high interest rates throughout 2023 could destabilize the financial system”.

If anything, the equivalent of the current situation could be found in what the HBO Max series, Dragon House, calls “the false dawn.” Shrager believes that the longer the battle against inflation continues, “the more households will burn through their savings. There is already evidence that they are racking up credit card debt.”

At the same time, customers of major U.S. banks are reportedly increasing their loan applications to maintain their spending levels. The latter, according to specialized media reports, suggests that JPMorgan, Bank of America and Citigroup expect at least a moderate recession.

Another aspect of singular weight is history. Even though a soft landing is expected, the U.S. economy has moved according to clear patterns throughout its history. One of them suggests that “it has usually taken an economic recession to end a sustained period of high inflation,” The New York Magazine notes.

On the other hand, the latter portal considers that the recession will not be present this year. “The economy will improve before it gets worse. Or so several indicators seem to suggest”, comments the author of the paper. Another aspect that should not be overlooked is the fact that China’s recovery after the confinements could cushion the blow.

The possibilities are centered between recession and soft landing. According to the vast majority of experts, the former scenario is the most likely. But the latter continues to gain traction and the level of fear and nervousness seems to be dropping. One of the factors that could bring relief is China’s much-talked-about reopening. This is a breath of fresh air for battered Western businesses.

Even the head of the International Monetary Fund (IMF) herself, Kristalina Georgieva, said her agency would lift its recession forecast for 2023. “We have, demonstrably, the strength of labor markets that translates into consumer spending and keeps the economy going,” she said last Friday in Davos.

“With China reopening, we expect growth this year to again exceed the global average,” he stressed during his invention at the World Economic Forum.

At the other extreme, in the U.S. economy the expected indicators are suggestive. Thus, fourth quarter growth could be the justification for all the optimism. It should be remembered that the first two quarterly quarters of 2022 were contractionary, which in theory marks the beginning of a technical recession, which was not announced only because of the strength of consumption and the labor market.

Subsequently, in the third quarter, the mood began to change for the better, with GDP up 3.2%. For the last quarter of 2022, growth of 2.7% is expected. Other data such as industrial production, retail sales and housing starts show negative signs of exhaustion. All this does not negate that the hope for a soft landing continues to permeate among US analysts.