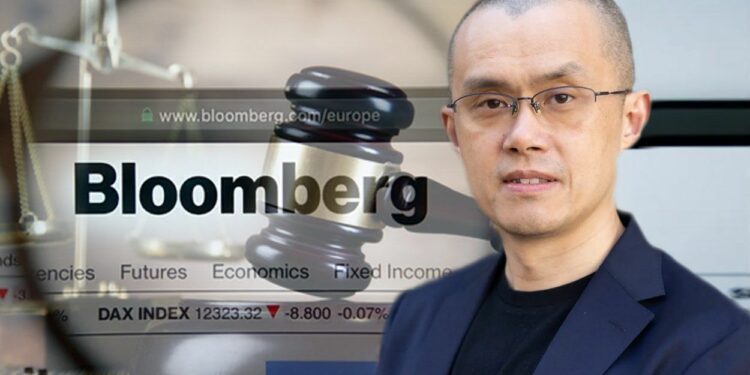 The CEO of the world’s largest digital currency trading company, Changpeng Zhao, claims that Binance is the victim of defamation. Consequently, the also known by his initials CZ confirmed that he is taking criminal action against Bloomberg Businessweek. In its Chinese edition, the financial magazine describes the exchange as a Ponzi scheme.

The size of this crypto exchange makes it impossible for it to go unnoticed and problems seem to haunt it. The most recent headline about the company had to do with a fine it received from the Dutch central bank (DNB). As reported by INVESTOR TIMES, the entity accused the platform of operating financial products without proper authorization. The problem seems to be on the way to being resolved, according to the parties.

But the company’s board has not breathed a sigh of relief when a new problem knocks on its door. And it is no small matter, since Bloomberg is one of the most prestigious business magazines and is followed by millions of investors around the world. Hence the importance CZ is giving to correcting this new case to avoid consequences against its company.

The interesting thing about this case is that the CEO of Binance himself has wasted no time in expressing his annoyance about what happened. The information about the lawsuit was published by the Watcher.guru portal on Monday afternoon and shared by CZ on his account on the social network Twitter. According to the news portal, the lawsuit demands Bloomberg to remove the publication, make a formal apology and pay financial compensation for the damage to the exchange‘s reputation.

The aforementioned magazine, apart from describing the exchange as a Ponzi scheme, made other claims against it. For example, it states that the platform promotes scams by inviting its users to invest in currencies such as UST, Terra’s algorithmic currency. As this portal reported at the time, that project collapsed in early May, leaving losses of close to $60 billion dollars.

According to Bloomberg, CZ’s company was offering eye-popping 20% returns to investors to place their capital in Terra’s currency. The authors add that the platform rated UST as “something special” among its investment options. Thousands of people suffered losses, which the portal blames on the exchange‘s “misleading advertising”.

These accusations are rejected by the CEO and the entire Binance management. However, they are not the only attacks launched against the most important company in the crypto universe. In addition, the paper says that “most transactions on Binance are conducted through the main exchange, Binance.com, which is based in who-knows-where and owned by God knows who.”

Since last year, regulators around the world launched what at first glance looks like a coordinated attack against the exchange. Numerous agencies from different countries initiated an unprecedented pressure against the company. This dangerous scenario for the future of the company was directly addressed by CZ itself.

From then on, the original philosophy of not being attached to centralized entities was radically changed. The platform did not have its own headquarters and offered different types of services, refusing to apply for licenses. It also did not consider KYC (know-your-customer) as a mandatory requirement, as it did not plan to be accountable to any government or centralized organization.

After those events, Binance’s CEO announced the shift in focus and now the company’s head office is established in Dubai (UAE) and Zhao himself is based in that same Middle Eastern country. The entrepreneur has even publicly stated that he has excellent relations with the UAE authorities.

In any case, Bloomberg rails against the company, citing multiple problems with regulators. However, it should be noted that many of these setbacks are being resolved and the exchange is already making significant progress in European countries such as Spain and France. Although the aforementioned publication changed the headline by removing the direct allusion to a “Ponzi”, many of the attacks remain and are grounds for a lawsuit. At least that is what CZ assumed.

Bloomberg’s China subsidiary to be sued in Hong Kong courts

Bloomberg Newsweek’s Chinese subsidiary will be taken to court by Binance’s lawyers in the Hong Kong jurisdiction. It was this section of the portal that placed CZ on the cover of its 250th edition on July 6. The lawsuit understands that the publication contains false allegations of unproven criminal charges.

“While Binance is one of the best stops during the crypto winter, a mass abandonment is the least I would want at this time.”

On the other hand, Changpeng Zhao’s lawsuit is represented by Jose Antonio Maurellet of Des Voeux Chambers. The defendant firm will be Modern Media Company. As already remarked, Binance’s CEO will request a formal apology from the magazine and a monetary compensation. He will also press for the portal to delete the publication and its links on social networks.

With this measure, Binance executives seem to be determined to teach a lesson to the media that they consider defamatory. This is not the first time that the world’s leading exchange has clashed with the media. A previous case involved another famous portal, Forbes. This media would have published news that Binance considered malicious.

Although a lawsuit process was also initiated at that time, the exchange dropped the charges claiming that it was not worth the wear and tear. Now the situation seems more delicate, as dozens of exchange platforms are presenting serious problems and users are abandoning many of them. Although Binance is one of the best stops during the crypto winter, a mass abandonment is the least you would want right now.

But Binance is not the only exchange that is suffering from alleged defamations. Another of the industry’s leading platforms, KuCoin, also claims to be a victim of actors generating FUD (fear, uncertainty and doubt). From the Twitter account @Oteroooo it was reported that the exchange would be on the verge of bankruptcy due to lack of liquidity due to an alleged exposure to Terra coins.

According to the user, whose account disappeared from the aforementioned social network, the platform is insolvent to the tune of $500,000,000 dollars. This information, he explains, would have been provided by a former KuCoin employee. Immediately, the exchange was quick to deny the news and clarified that its platform had no exposure to Luna or UST or their versions of the Ethereum network.

With this, it is noted that the diligence of Binance’s CEO is more than warranted in the face of the possibility of his platform being subjected to FUD. For companies of this type, investor nervousness is one of the biggest headaches, as a stampede can bankrupt them immediately. The management of both KuCoin and Binance know this.

Should the rumors come to fruition with one of these two giants, the crypto market would have its own version of Lehman Brothers. In that sense, it is understandable that CZ is willing to take the lawsuit to the ultimate consequences against Bloomberg to demonstrate the solvency of his company to its millions of users worldwide.

A “junk casino” with secret offices in Shanghai

The digital asset trading platform’s lawsuit against Bloomberg has a lot of ground to make up. As a result, most of the magazine’s accusations against the exchange are very high-sounding. In fact, four are the main focuses of attack against Binance. The first is the aforementioned case of having defrauded users with investments in Terra’s coins.

Another argument is that the platform functions as a huge junk coin casino. Citing an anonymous source, the author says that Binance’s CEO is aware of the dangers of risky cryptocurrencies like Dogecoin, but still incentivizes investments in them. That way, he would have a small handful of recognized and stable coins next to an infinity of “junk coins”.

Another accusation casts doubt on whether the company did not have headquarters in times prior to the establishment in Dubai. The work points to the company having been established in the shadows in Shanghai.

“More than 100 Binance employees checked into an office in Shanghai’s Huangpu district every day, with bilingual work permits and sitting at traditional desks to go to work,” the report states. In addition, the company reportedly hired these workers under the front name of Shanghai Ruique Culture Development Company

“It asked them to discreetly wear the company’s logos in public and not to tell anyone where they worked,” the article reads. The fourth attack says that the company seeks to start a path to legalization by pretending to forget past actions that got it in trouble with the authorities.

But if the lawsuit in Hong Kong is against the subsidiary Modern Media Company, in the United States it is directly against Bloomberg L.P. and Bloomberg Inc, according to Coindesk. This lawsuit would have been filed in the courts of the Southern District of New York. The subject matter of the suit will be “defamatory statements.”

The motion warns that the four allegations against Binance’s CEO (and the exchange in general) seek to create unrest. In doing so, they would seek to imply that the company is acting outside the law. With this second front between the media and the head of the largest cryptocurrency exchange , a new ultra-aggressive strategy of defense of his company by the crypto billionaire is confirmed.

Binance is by far the largest cryptocurrency exchange in trading volume and users. Its reputation has been built over the years and its CEO, Changpeng Zhao, is the wealthiest person in the cryptocurrency universe and one of the world’s largest wealth holders.

For many analysts, the fate of the cryptocurrency market is closely linked to the existence of this platform. Binance has enabled millions of people to connect with Bitcoin and other currencies for the first time. Those new users have no idea what that market will be like without the platform. Hence, collapsing Binance could be a very strong blow against virtual currencies.

Now it remains to wait for the outcome of this chapter, which CZ lamented on social media. “The comments here say it all. While most Bloomberg journalists are good, this time it was bad,” he lamented. In another response to the post he wrote that the portal had ignored all the positives and focused on the bad in the past.