Binance fined in the Netherlands for operating without license 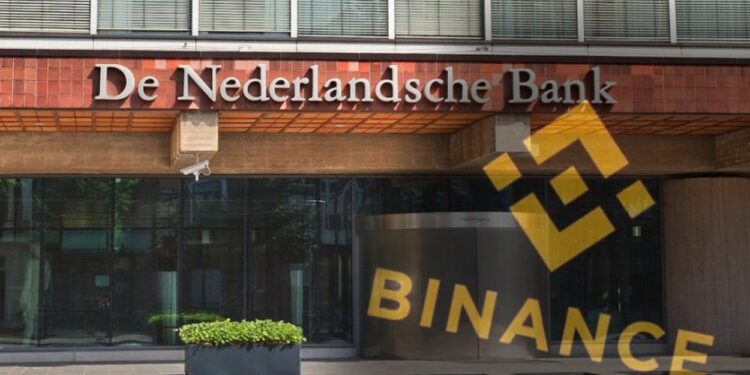 By a statement released earlier this week (July 18) De Nederlandsche Bank (DNB) reported the imposition of a fine on cryptocurrency exchange Binance. The fine, imposed on April 25, against the crypto company would amount to €3,325,000 euros and the cause would be to operate illegally with trading services. To offer this type of options to customers, the platform would need a set of permits.

The state institution stated that the company had previously received a warning notice for carrying out operations without the required authorization. The entity, it says, seeks to prevent money laundering crimes from becoming an escape route for criminal actors. This would have led them to warn the company that they did not have the registration issued by the central bank.

In addition, DNB’s action would be covered by the Law on the Prevention of Money Laundering and Terrorist Financing (Wwft). The fact occurs despite the fact that the cryptocurrency company claims to be open to comply with all the requirements of the authorities. Operating without permits has earned the platform significant setbacks in several countries. However, that does not stop it from being the most important of its kind worldwide.

The operations of Binance

The cryptocurrency exchange Binance is the largest of its kind in the world. It offers digital currency trading services in most countries on all continents. Some administrations have banned it from operating, but in most cases they work without major obstacles.

Thus, the platform has taken advantage of the lack of regulatory clarity in crypto matters to extend its operations with maximum profits. Few countries have legislation in place to regulate the use of cryptocurrencies. Such a reality allows companies in the sector to take advantage of the benefits of this limbo to increase their revenues. That is one of the aspects referred to in the aforementioned document of the Dutch bank.

“Binance has enjoyed a competitive advantage because it has not paid any taxes to the DNB and has not had to incur any other costs in connection with the DNB’s ongoing supervision. Another important reason for the high amount of the fine is that the infringements took place over a long period of time,” they say. The agency reportedly explained that the size of the fine is coupled to the magnitude of the alleged infringement of the platform.

Thus, the Binance exchange’s fault would have earned it a fine close to the ceiling determined for these cases. In this regard, the central bank estimates that these fines range from €2 to €4 million. The fact that the platform was fined €3,325,000 euro suggests that its business is considered very dangerous in that country. In fact, the fine is category 3, the heaviest in that legislation.

The process that led to the fine agains Binance

As explained above, the DNB made a previous warning to the aforementioned cryptocurrency exchange. By 2020, the central bank asked the company led by Changpeng Zhao to introduce the application for registration. Until then, the platform’s stance was to refuse any linkage that would subject it to the authorities. The original cryptocurrency philosophy had so permeated the company that it was opposed to even having its own headquarters.

After the aforementioned 2020 episode, the Dutch central bank initiated an investigation process into the crypto trading firm. The process concluded with the DNB’s confirmation of guilt about the business of the largest crypto trading and services exchange. Recently, on June 2 of this year 2022, the Binance exchange refused (appealed) the payment of the fine.

For the authority of the European country the registration is of great importance because it seeks to prevent financial crimes from occurring. The “anonymity that comes with cryptocurrency transactions” offers many opportunities to negative actors in the world of finance. Consequently, “without this registration obligation, it is less easy to control whether the risk of criminal money flows is sufficiently countered,” explains the document cited.

With this in context, the DNB considers that crypto business jeopardizes financial security and opens the door to many crimes. Money laundering, it explains, is the basis for many other crimes, as it hides the illegal origin of the funds consummating the crime and giving way to other possible crimes with those same funds. At the same time, while this is happening, the criminals remain out of reach of the authorities.

Turning the page and leaving behind the dispute

Meanwhile, the crypto company expressed its readiness to obtain the aforementioned license issued by the European country’s central bank. Consulted on the CNBC portal a spokesperson for the platform emphasized the company’s commitment to work with the authorities. He said that the crypto company wishes to turn the page on this contradiction and work closely with the DNB authorities.

“Binance says it is committed to putting the issues with regulators behind it and becoming a properly registered company in all countries in which it operates user funds.”

“Today’s decision marks a long-awaited turnaround in our ongoing collaboration with the Dutch central bank,” the spokesperson said. He also downplayed the importance of the appeal they would have made to the fine received. “While we do not share the same view on all aspects of the decision, we deeply respect the authority and professionalism of the Dutch regulators to enforce the laws as they see fit.”

With these statements, the Binance exchange seems not to want more problems than it has with the laws. It should be recalled that since last year numerous national authorities have launched what seems to be a simultaneous attack to put pressure on the platform. Some legislations threatened, others fined, and a third group outright banned it from operating within its borders. Such an attack caused the company to change its position vis-à-vis centralized governmental bodies. They now speak of cooperation and full engagement.

The platform is banned from operating in some countries, including the United States. In that country, the market is largely dominated by its rival Coinbase, which complies with US laws. Despite this, Binance is by far the largest exchange in the world with a volume that overwhelms the rest of the competition. Its daily spot trading volume amounts to $15.5 billion, according to Coingecko.

On the other hand, it was learned that a memorandum of understanding would have already been entered into between the parties. Binance’s steps to be a friend of the regulators have allowed it to obtain licenses in Spain, Italy and France. The same attitude would be applied in the Netherlands to avoid being expelled as it has already happened with regulators of other nations.

In any case, the DNB stated that the fine was reduced by 5% thanks to the company’s transparent attitude throughout the process. The decrease is also linked to the fact that the crypto firm definitely applied to the aforementioned license issued by the authority. Likewise, the institution assures that the Binance exchange’s request would be just now under review to define the probable approval.

With this, the platform has a chance to come out of this new incident intact. It should be considered that this cryptocurrency exchange is one of those that has come out best amid the losses linked to the current winter in the digital currencies market. Most exchanges and other investment platforms announced layoffs and in more extreme cases have gone bankrupt.

Among the most notorious cases, there is the bankruptcy application of Celsius and the hiring freeze by the giant Coinbase. Spain has not been immune to these problems in the cryptocurrency market. The most notorious of the episodes was the freezing of the exchange 2gether, which froze the funds of some 100,000 users in that country.

Binance’s role in the midst of the current winter

Along with FTX, Binance is one of the most active companies in the fight to keep the cryptocurrency market afloat. Both announced their intentions to rescue some companies that had problems due to the price drops of the main coins. Likewise, they have given advice to users when it comes to managing their funds.

In that regard, Zhao recently asked people to stay away from trading platforms that are in the process of collecting funds in order to survive. He said this recently in reaction to the Zipmex platform’s freezing of withdrawals.

According to Zhao, his exchange, Binance, has the best of transparency and fund management. Moreover, he boasts that he has made much of his Bitcoin investments at less than $2,000, so the current price still translates into considerable profits for the company. Similarly, CZ, as it calls itself, asks people to choose wisely.

As the winter deepens and the streak of falling major cryptocurrencies lengthens, the more companies will go bust. Most analysts are asking people to look for only the most solvent platforms or keep their funds in cold wallets for safety.