Bitcoin Billionaire is a fraud that is spreading fast in many countries. We have seen how it is "camouflaged" in reputable newspapers to spread like wildfire. 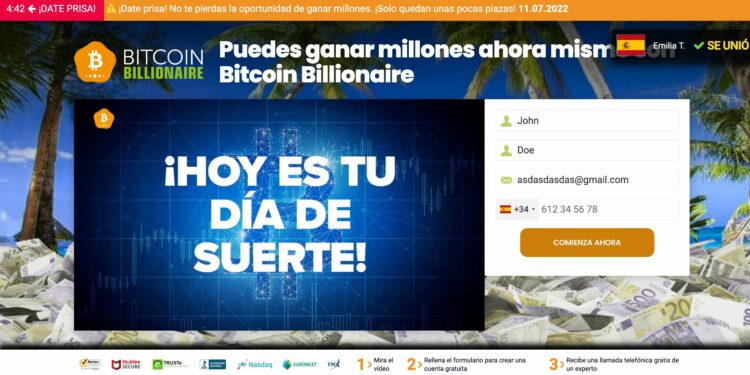 You’re browsing a legitimate, old-fashioned newspaper. And you see an eye-catching article that talks about Amancio Ortega’s (or Messi’s, or Bill Gates’) new “amazing” investments. You click on the suggestive headline and you arrive at another, apparently legitimate newspaper, which explains in an elaborate article that the tycoon Amancio Ortega has discovered an incredible platform that allows him to earn thousands of euros a day automatically.

does this story ring a bell?

“It is literally the fastest way to earn an extraordinary cash income right now,” the text continues. And it adds with dubious grammar: “And it won’t last much longer, as soon as more and more people find out about it. Or as soon as the banks put the brakes on it.”

The wonderful platform is called Bitcoin Billionaire and, they claim, it will make you a millionaire in a few weeks.

In the past we have written about many scams like the one mentioned in this article. The typology is always the same, only the name changes: Bitcoin Profit, Bitcoin Trader, Bitcoin Revolution…

What’s the truth in them? Absolutely nothing. They are well-orchestrated scams by opaque companies located in tax havens whose only function is to defraud unwary investors who end up trusting their impossible promises.

This is their modus operandi:

1. They sneak into major newspapers and ad networks to get lots of hits

Newspapers, as it is already known, partially live from selling ads in their articles. To manage the sale of their advertising space they collaborate with companies that are exclusively dedicated to it, such as Google, Microsoft, Taboola and Outbrain, among others.

These companies manage inventories of hundreds of thousands of ads worldwide, so their review and screening system is generally based on semi-automated systems with moderate human intervention.

The scammers behind Bitcoin Billionaire specialize in circumventing these screening systems and managing to infiltrate the above ad networks to get huge exposure — i.e. a huge amount of hits.

When Bitcoin Billionaire’s victims click on the headlines of its so-called news stories (which are really ads disguised as editorial content) they arrive at seemingly legitimate articles.

In the case of Bitcoin Billionaire we have analyzed, the scammers pretend to make the user believe that they are in an article from El Pais newspaper. However, if we look at the domain where the article is hosted, we see that we are not in such a header, but in a fake news article whose function is simply to deceive:

It goes without saying that neither Amancio Ortega nor any other personality has ever recommended this type of platforms that promise unlimited profits.

3. Bitcoin Billionaire makes promises that are impossible to keep

In the world of investments, it is a good idea to be guided by a basic premise that allows you to detect frauds with great precision: If someone is guaranteeing you profits (especially large ones) without you having to do anything, they are usually trying to scam you.

In the fake news article we mentioned in the previous point we found statements that should be enough to set off any reader’s alarm bells:

In the fake news article, we find multiple links that will take us to the Bitcoin Billionaire scam page, a website where the impossible claims are even more intensified: “You can earn millions right now with Bitcoin Billionaire“, “cutting-edge technology to guarantee your earnings”, “sign up today and be a millionaire tomorrow“, etc.

On the same page, we find supposed reviews of Bitcoin Billionaire, the most famous of which is that of a guy who claims to have won 447,000 euros on the first day after registering: 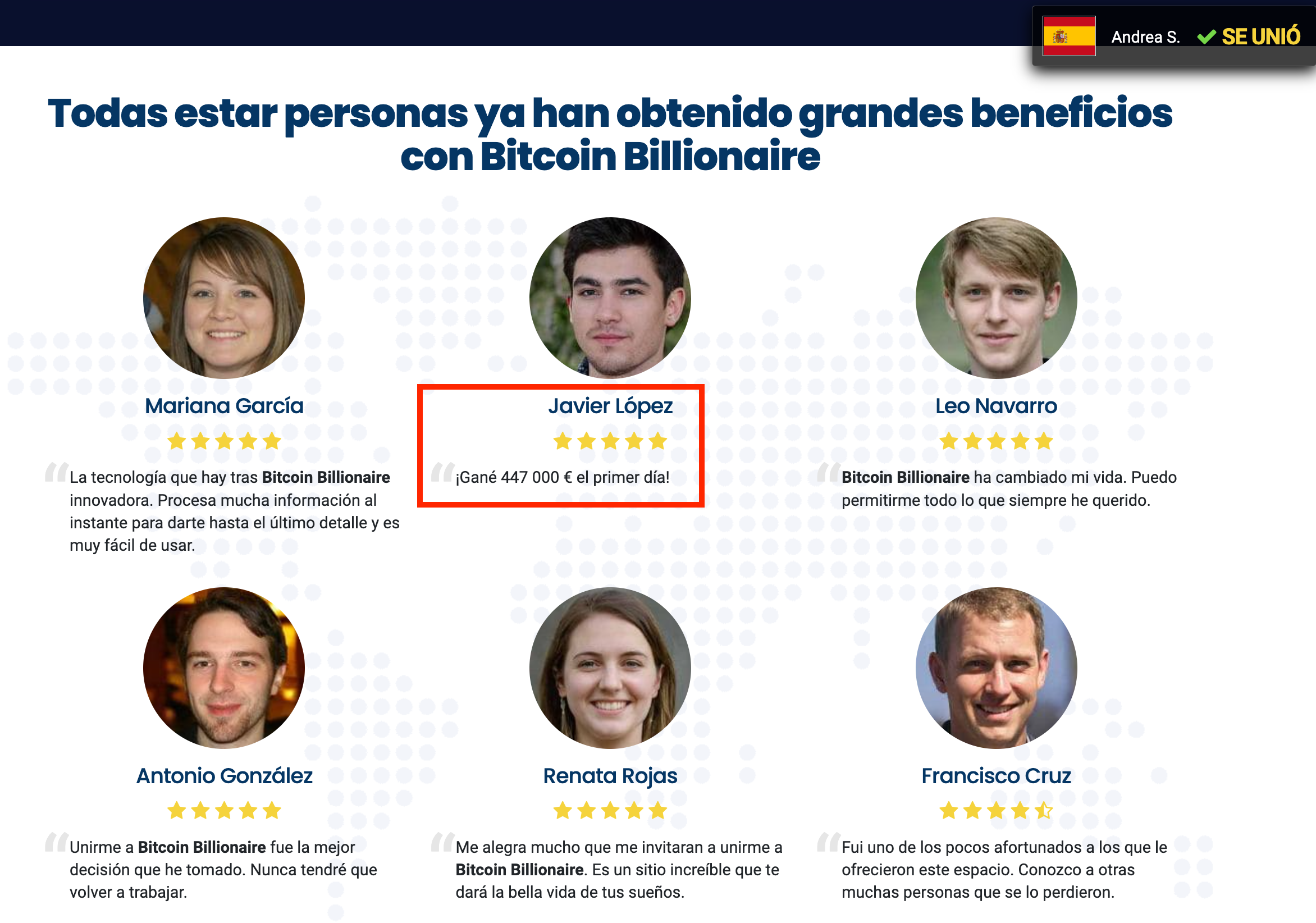 There is no need for us to spend our time disproving these claims, which are impossible because they are ridiculous. The simple fact of promising a success rate of 80-89% of the operations is, in itself, impossible.

Of course algorithmic (automated)trading exists. In fact, it accounts for 60-73% of all Wall Street trading, according to data shared by Yahoo Finance. The big banks and investment funds have their own algorithmic trading departments, entire floors of buildings with some of the brightest minds on the planet dedicated to creating algorithms that beat the market.

Although high-level algorithmic trading is developed with great secrecy, it is estimated that the best algorithms can achieve a success rate of around 55%.

With so many algorithms trying to take advantage of Wall Street, they increase the efficiency of the market and burn algorithmic strategies, which have to be reinvented every so often because many become unprofitable after a while.

In this context, it is quite impossible for an anonymous website to offer for free an algorithmic trading robot that achieves a hit rate of 80-89% of trades.

If such an algorithm exists, the last of its creator’s interests would be to share it — let alone for free.

4. What happens if you fall into the Bitcoin Billionaire trap?

At this point in the story you might want to know what happens if you sign up for Bitcoin Billionaire.

The first thing they ask you for is your contact details, including your cell phone number. Once you have provided them, you will be taken directly to a supposed trading platform, whose name may vary: Investirex, Avizgroup, etc.

The first thing they will ask you to do is to deposit money in Bitcoin Billionaire.

If you try to search for the legal information of this supposed trading platform you will hardly find anything. In the case we have analyzed we have detected, on a remote legal information page, that the company responsible is Castan Holdings LTD, a company supposedly registered in St. Vincent and the Grenadines and currently under investigation by BaFin, the German Federal Financial Supervisory Authority. Other legal documents state that such a company is located in Dominica, a neighboring island that is also an opaque tax haven.

After a short while they will call you on the phone number you provided during registration to repeat their sales pitch (“Don’t you want to earn thousands of euros a day? Don’t you want to be a millionaire?”) and do everything they can to pressure you to deposit the maximum amount of money.

If you fall into the trap and deposit money for the next few days they will make you believe you are making money. Every day. You will see how in your account you earn hundreds or even thousands of euros a day.

If, on the other hand, you decide that you don’t want to be greedy and want to withdraw all your profits, they will tell you that unfortunately you don’t reach the minimum deposit amount to be able to withdraw funds.

Their response will always be the same: they will ask you to deposit more and more money, and they will repeat the process as many times as necessary until they consider that you have collapsed.

Is it possible to invest in Bitcoin with guarantees?

Scams like Bitcoin Billionaire try to take advantage of the halo that Bitcoin leaves behind and tarnish the image of the dominant cryptocurrency.

However, it is important to mention that there are multiple platforms to invest in Bitcoin safely and with guarantees for the investor, regulated by government agencies, both international and national.

In the following section you will find a selection of these platforms that allow you to invest in Bitcoin, all of them selected for being the most reliable, secure and cheapest in their category.