Opportunities and risks in NIO shares: What are their projections? 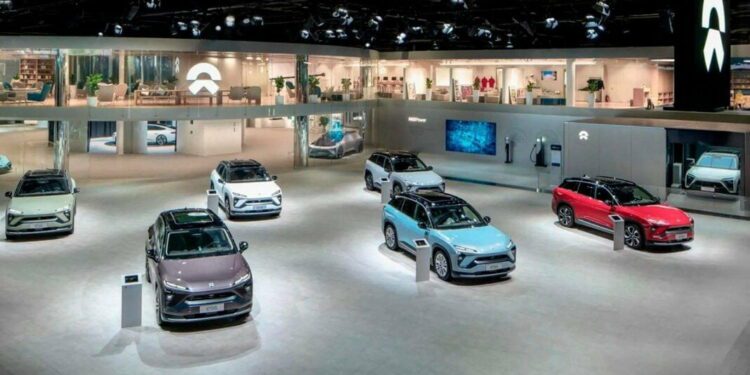 With only seven years of life, the Chinese automotive company has revolutionized the automotive sector and, consequently, the global investment sector.

NIO, the company, founded by the president of Bitauto and Next EV, William Li, has enjoyed exponential growth, thanks to the rise of electric mobility around the world. The aspirations of NIO took a turn around in 2016, with the entry of numerous international investors, such as Tencent, Baidu, Sequoia, Lenovo, and TPG. Since then, the company’s bet is hybrid: boosting electric vehicles and developing autonomous driving.

Thus, NIO’s October 2016 announcement of autonomous vehicle testing generated a new investment attraction and clearly positioned itself in a market segment dominated, so far, by Tesla.

NIO’s commitment to autonomous driving did not bring immediate results for the company. But it did starting in 2020. During a year marked by the pandemic and the havoc it wreaked on the global economy, NIO was able to double sales in 2020.

Results that the company expects to increase this 2021. “As we continue to improve the production capacity of all products, our monthly capacity will grow to 5,000 units per month,” assured Bin in August 2020.

NIO’s good numbers allowed it to grow its shares exponentially. A listing on the New York Stock Exchange in 2020 kicked off NIO’s international expansion.

And its shares appreciated unprecedentedly.

What can we expect from NIO shares

The explicit support of the government of the People’s Republic of China presents NIO as the brand capable of taking on Tesla in electric mobility and autonomous driving. Its good 2020 sales numbers augured well for 2021 for the Chinese company.

The automaker that aims to overshadow Tesla closed 2020 with total revenues of $1.017 billion, up 133.2% on 2019 data. However, the exponential growth in sales and turnover failed to stop the Asian automotive giant from closing the year with losses of $212 million.

But precisely because the Chinese company’s data is still far from Tesla’s, betting on NIO shares may present unique opportunities.

First, it is worth noting that NIO’s growth is exponential. As of 2018 the company’s production and turnover figures are higher than those achieved by Tesla at its inception. The global macroeconomic context and the increasingly determined commitment to electric mobility are playing in NIO’s favor.

So does having the support of the Chinese executive. And this translates into an increase in its shares that could continue to grow. 2020 was NIO’s golden year, with its shares growing by more than 1,000%.

In Chinese government has ambitious plans for the electrification of mobility. They recently approved a mandate that by 2030 40% of vehicles sold will be electric. But that’s not the end of their aggressive transition plan to stimulate electric mobility: in some cities in China, getting a license to buy a combustion car costs more than the vehicle itself.

China will do everything in its power to be a world leader in the transition to electric mobility; and NIO is in the right place to benefit from the aggressive policies of the Chinese executive.

By way of summary, we can identify the following investment opportunities in NIO:

NIO’s excellent 2020 numbers, coupled with the booming electric automotive sector, set it up as a good investment opportunity. However, we should keep a few factors in mind when investing in NIO.

Firstly, it is worth considering that the start of 2021 has not been as good as previously thought. The Chinese company admits that its production forecasts for 2021 may be constrained by global semiconductor shortages. Supply chain limits will cause NIO to settle for producing 7,500 vehicles per month. This will allow it to improve on 2020 data, but fall short of targets.

And the main weakness of NIO shares can be found in debt. Despite the company’s exponential growth, NIO continues to record significant losses. Losses that in 2020 reached $178 million, more than originally expected.

On the other hand, one of the great allies for the commercialization of NIO is the Chinese government. So far, China has invested heavily in subsidizing electric cars. However, since last year, Xi Jinping’s executive has reduced by 10% its subsidies for the purchase of electric cars.

Thus, we can identify the following threats to NIO investment:

Share forecasts for NIO shares in the short and medium-term

The above has meant that NIO stock has not started the year on a good footing. If in January NIO’s stock was above $60, it is now hovering in the $40 range.

However, NIO’s current share price, far from discouraging, gives us an excellent entry point into the Chinese automaker.

Fundamentally, NIO’s growth forecasts, if Tesla is anything to go by, are still very high in the medium to long term. The electric car is here to stay and China is leading the transformation in sustainable mobility. Betting on a young, innovative company with the capacity for exponential growth could pay off in time.

We must not forget the imminent irruption of NIO in the European market: this coming September will open the first NIO store in Europe. The first of many, says founder and CEO William Li, recalling that “from day one our goal has been to be a global brand.”

On a technical level, we see that NIO shares found a floor in the $30 range; support that they have been testing in the sideways movement described in the past 5 months.

We identify the lateralization of these past months as a clear accumulation zone. Indeed, NIO shares could be getting ready to test their all-time high of $67 reached in early 2021.

The moving average of the last 200 sessions likewise points to the current price as a good entry point. At the time of writing, NIO shares are trading just below this moving average (the blue line in the chart above), which determines an ideal entry point and makes us foresee a bounce to the upside to try to reach new highs.

How to buy NIO shares right now, safely and without paying commissions?

If you want to buy NIO shares, the favorite option recommended by Investor Times is the broker eToro.com, an investment platform used by more than 20 million users, based in London and authorized by CySEC and the FCA (the UK regulator).

When it comes to buying NIO shares, eToro offers us a great advantage: No commissions of any kind (0%) on the purchase, sale, or custody of shares. Another important point in favor of eToro is that it allows you to add funds to your account immediately by credit card, PayPal, or bank transfer (among others).

In addition to the above, eToro.com allows you to invest in NIO shares by buying fractions of shares so that even investors with little capital can invest in large companies whose shares have a high price.

> Go to eToro.com to buy NIO stock without paying commissions <