The leader of the company linked to the cryptocurrency market acknowledged having carried out fraud with investment assets and faces jail sentence. 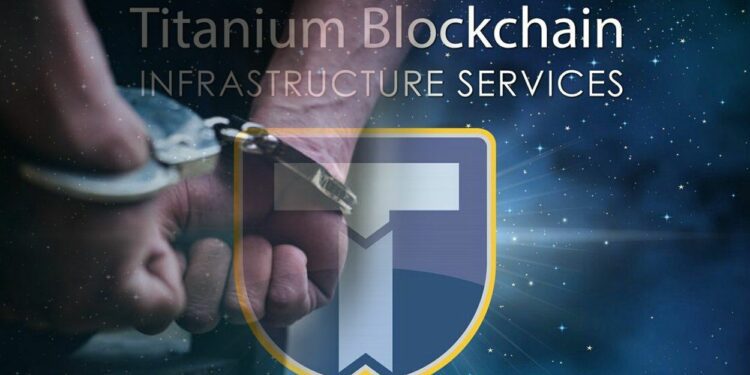 A new negative chapter drags the cryptocurrency universe and it has to do with an investment and technological services company. It is Titanium Blockchain Infrastructure Services (TBIS), which was accused of fraudulent behavior by the US authorities. This Tuesday it was learned that the CEO and founder pleaded guilty to fraud before the California courts.

Last week, as reported by the U.S. Department of Justice authorities, Michael Allan Stollery pleaded guilty to fraudulent conduct. As a result, the 54-year-old businessman is facing charges of up to 20 years in prison. The scheme of mismanagement of resources focuses on the funds raised in the launch of its coin (ICO).

Stollery would have used funds from that initial fundraising for personal expenses, such as paying for a condo in Hawaii, by his own admission. In the ICO of his token, the entrepreneur would have collected about $21 million dollars, according to reports from federal officials in charge of enforcing justice in the case. This successfully closes one of the many scam cases that have been emerging in the middle of the current winter in the sector.

As with all fraudulent schemes, Stollery lured dozens of customers to Titanium Blockchain through misleading promises. According to the authorities’ report, the defendant admitted to manipulating significant portions of the company’s white paper to reach investors.

In the documents, the company offered investors explanations about the various options for placing capital in cryptocurrencies. It also provided a description of the purpose of the technology behind the offering. It also explained how the offering differed from other cryptocurrency offerings, as well as the return prospects for potential investors.

The white paper states that it intends to enter in a disruptive way into the vision of leaders in the provisioning and virtualization spaces.Likewise, it notes that return on investment (ROI) will be achieved in a faster manner compared to other cloud investment options. The company boasted of being able to virtualize all aspects of the IT enterprise, from databases, firewalls and more.

Accordingly, Titanium Blockchain was presented as the solution to real problems that exist in industries across various sectors. Behind the promises, it hid the ambition of the founder, who now faces a penalty that could see him spend up to two decades in prison. Thus, a new company joins the list of frauds in the world of digital currencies.

High-flown promises for all types of investors

The company’s creativity in attracting investor capital was extremely varied and with pitches that could fill with excitement. And it wasn’t just about the excitement of getting great returns, but about making people feel like participants in a revolution in the area. It was about nothing less than the application of blockchain technology in sectors with deficiencies.

“Just as steel changed the construction industry forever, Titanium will usher in a new era in network construction,” he said. This type of statement was accompanied by false testimonials from customers and partners that did not exist, explains the aforementioned official report from the federal authorities.

On Titanium Blockchain’s website, the company is said to have close ties with the U.S. Federal Reserve. Those ties would be business relationships to update data from the central bank of the world’s leading economy. It also presented fictitious partnerships with dozens of companies.

The purpose of the fraudulent firm was to create an appearance of legitimacy that would inspire confidence in investors. At the same time, the company’s former CEO admitted to having commingled the company’s funds with his personal money and to making large expenses unrelated to the business. These included the payment of property bills and credit card charges, authorities said.

With all the evidence against him, the defendant has a sentencing schedule for next November 18. This is also expressed in the aforementioned document from the U.S. Department of Justice.

An important aspect of this new criminal story within the cryptocurrency market is that the authorities would be very severe. Until this year, criminal prosecutions against fraudulent companies in the sector were rare phenomena. Hence, many fraudsters created shell projects to appropriate investors’ money and apply so-called rug-pulls.

“A strong punishment of the former CEO of TBIS would serve as an exemplary punishment for other bad actors in the sector.”

Such is the case with many cryptocurrency exchanges, which were born to attract victims and upon reaching a certain point disappeared. A recent paper by coinjournal.com highlights that 42% of failed digital currency trading platforms chose to disappear without a trace. By 2019 the growth of cases reached 252% and by 17% in 2020.

Companies that applied the same scheme as Titanium Blockchain used to get away with it very often. However, in this 2022, with the fall of Terra, the authorities opened their eyes more and platform projects that are in trouble are being closely followed. Proven cases of fraud like Stollery are an opportunity to make other projects planning to defraud investors learn their lesson.

In that regard, Finder’s Frank Korva believes that with exemplary punishment for this entrepreneur, other bad actors in the cryptocurrency sector have a warning. “They will have to think twice before trying to enact a similar type of scheme,” he assures quoted in The Street.

Frauds are fewer, but they are out in the open

According to the cited cryptojournal.com paper, the number of cryptocurrency trading platform or service scams have decreased. The fact is that they are now more visible thanks to media coverage and close monitoring by authorities following the Terra case in early May. With the winter in the crypto market, the sector’s giants have been falling, which makes the issue more conspicuous to the public.

Powerhouses like Celsius and 3AC have collapsed sending ripples throughout the market, which has dragged down other smaller companies. Many exchangeshad funds exposed to these companies’ investment options and are now experiencing sharp losses that add to the typical bear market losses.

Cases like Titanium Blockchain are not uncommon in the media in recent weeks. In Spain there was a similar case of alleged fraud with cryptocurrency exchange 2gether. The company froze users’ funds without warning and would be close to declaring bankruptcy due to the blows suffered by the “crypto winter”. However, as reported by EL PAÍS FINANCIERO, the platform was allegedly already bankrupt in December 2021.

Frauds and scams in the world of cryptocurrencies will not disappear in the short term. Many enthusiasts of these assets are undertaking campaigns for holders to withdraw from the platforms and place their coins in non-custodied wallets. On the other hand, there are exchanges that have done better risk management and the crypto winter has not hit them decisively.

Authorities increase their presence in the crypto market

Regulatory and justice authorities in the United States have been accelerating their involvement in cryptocurrency market events. The most recent case is the investigation opened by the Securities and Exchange Commission (SEC) against the exchange Coinbase. The matter was opened because the platform allegedly offers certain services without being registered as securities.

Similarly, an employee of the same company was arrested last week and charged. This is the first case of punishment against a person for insider trading for profit in the cryptocurrency world. Three people were allegedly prosecuted in this case.

On the other hand, the aforementioned Frank Korva of Finder mentioned that at another time the CEO of Titanium Blockchain would have gotten off scot-free. Consequently, the fact that cryptocurrency ICOs are now rare helped the authorities to track the suspect. If these launches had the frequency of 2017, for example, it would have been impossible for law enforcement to detect the real projects from the fraudulent ones, he explains.

Currently, the authorities are pressuring people and companies in the sector to properly identify themselves and obtain permits to operate. All this allows the state to keep a watchful eye on possible fraud. At the other extreme, the most determined supporters of cryptocurrencies criticize this and claim that the authorities should not interfere in the financial privacy of those who decide to approach this market.