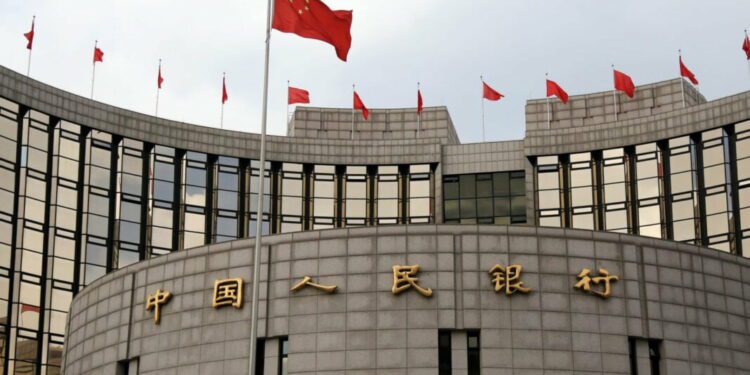 For decades, hundreds of billions of yuan in foreign loans have served to fuel China’s commercial hegemony and geopolitical influence around the world. But this record amount of capital export to the rest of the world is not sufficiently recorded, let alone understood.

The huge flows of Chinese capital to the world are not reported to the IMF, the BIS, or the World Bank. Among other things because China does not belong to any of these institutions. Moreover, the terms of the credit agreements are generally secret.

China obliges its borrowers to repay Chinese state-owned banks before other creditors. This is evidenced by a study of a set of Chinese loan contracts to developing countries.

Chinese loans serve two fundamental purposes. On the one hand, they secure a market for their products. On the other, they oblige the borrower to have due regard for the Chinese government and its policies.

AidData, a U.S. research lab at the College of William & Mary, along with other research centers, analyzed a data package compiled over three years. That data was drawn from about 100 Chinese loan contracts entered into with 24 low- and middle-income countries.

Many of these countries are dragging heavy financial burdens, as is the case of Venezuela while struggling with poverty derived from the prevailing political system and the dramatic economic situation resulting from governmental blunders and the pandemic of Chinese origin.

China is playing hard to become the world’s leading economic power. For this reason, it is the focus of attention of the think tanks. The Asian giant is currently the world’s largest lender and creditor with 65% of the total bilateral debt, distributed in Latin America, Africa, Eastern Europe, and Asia.

The problem is that despite being the world’s largest lender, “we lack basic data on the terms and conditions of its loans”. As the report’s authors, including law professor at Georgetown University in the U.S. Anna Gelpern, point out.

China’s debtor countries (debt balance as a percentage of GDP). 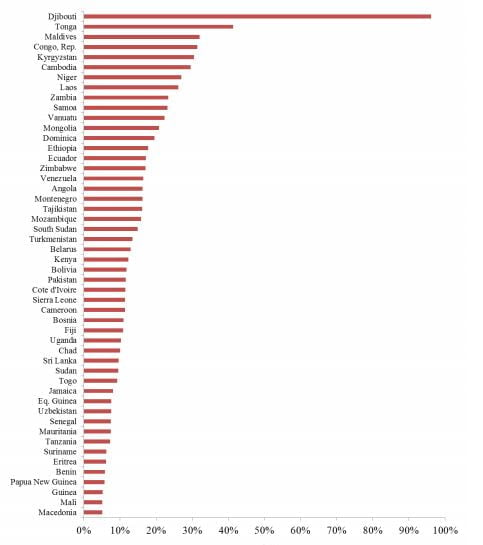 Researchers from AidData, the Peterson Institute for International Economics, the Center for Global Development (CGD) in Washington, and the Kiel Institute in Germany benchmarked the terms of Chinese loan contracts against those of other major international lenders.

From this emerged a first systematic assessment of the legal terms of China’s loan-based foreign relations, CGD said. The study’s findings highlighted several unusual features of the loans.

The agreements include a number of standard contractual tools to guarantee repayments, different from those used by multilateral lending agencies. The 77-page report notes that the contracts include confidentiality clauses, which prevent borrowers from disclosing the terms under which loans are signed.

They also have informal collateral agreements in which Chinese lenders have a higher level of priority over other creditors. There is also a promise by creditors not to request collective debt restructurings, a sort of non-Paris Club clause,” according to the authors of the report.

The Chinese contracts provide significant leeway for China’s creditor banks to cancel loans or accelerate repayment as they see fit, the report adds.

What role does China play as a member of the G20?

For CGD senior researcher and report co-author Scott Morris, these findings raise compelling questions about China’s role in the world as a member of the G20. Even more so when this forum has agreed to adopt a “common framework” aimed at helping poorer nations address their financial problems.

Especially at a time when they are under severe pressure from the covid-19 crisis. The framework, established by the world’s 20 largest economies, calls for equal treatment of all creditors.

This includes private lenders. However, most of the contracts examined prohibit countries from requesting debt restructuring on equal terms and in coordination with other creditors.

According to Morris, this prohibition is “very striking and seems to run counter to the commitments the Chinese are making at the G20.” Although he explained that it is possible that China may not enforce such clauses in its loan contracts in order to adhere to the G20 agreement.

When asked about the issue, the Chinese Foreign Ministry preferred not to respond. Previously, China has said that in addition to the country’s official creditors, its financial institutions were also working to help African nations alleviate debt problems.

China would have deferred 2.1 billion in debt

Last November it claimed it had deferred debt payments to developing countries totaling $2.1 billion under the G20 financial aid program. This is the largest volume of debt relief by a member country of the group.

Among the 23 contracts examined by the researchers for the study, it includes debt taken out with Cameroon, 10 contracts with Serbia and Argentina, and eight with Ecuador.

Both the IMF and the World Bank have warned that several countries urgently need the help of creditors to obtain relief from their respective debts. The global recession caused by the coronavirus crisis has particularly worsened in less developed countries.

Despite China’s dominance in world trade, its role in the global financial market is poorly documented and poorly understood. The “hidden debts” of developing countries to China represent a very significant volume for some thirty countries.

Not having accurate data on this credit relationship contributes to distorting risk assessment. Whether in terms of credit policy monitoring or in relation to the market prices of sovereign debt.

Why Chinese loans are opaque?

A study published by the U.S. National Bureau of Economic Research, titled “China’s Overseas Lending,” found that between 1949 and 1917 China subsidized 152 countries. About half of these Chinese foreign loans to the developing world are “hidden.”

Unlike other countries in the West with democratic regimes, China and its government entities do not publish data related to their foreign credit programs.

As it is not a member of the Paris Club or the OECD, it is not obliged to do so either. On the debtor countries’ side, moreover, information is rather incomplete as well. They are often prohibited from disclosing specific details of the loans and their terms.

While the loans are official, they are rarely government-to-government. They are signed between Chinese state-owned companies or banks with their counterparts in the borrowing countries. These business-to-business loans are generally not recorded in the statistics.

Hence, much of the international lending statistics are not being collected and accounted for.

The IMF estimates that less than 10% of low-income countries report the debts of their public enterprises. So even the debtor countries themselves do not know the exact amount of debt owed to China and the terms of the loans.

Most Chinese loans are made through the Export-Import Bank of China and the China Development Bank. As of 2017, the two state-owned financial institutions absorbed just over 75% of all direct cross-border transfers in the country. Both banks report to the Chinese State Council.

Being the world’s largest lender is no accident. It is part of the Chinese geopolitical game to extend its presence and influence on five continents. Fifty nations around the world have taken money from China and are tied to financial and commercial terms very advantageous to this country with a hybrid system.

For decades and quietly, China has been quietly strengthening its presence in the West, through loans and purchases from less developed countries. This relationship assures China a market for its products. But at the same time, it makes the country a secure supplier of raw materials: minerals, forestry, and agriculture.

In the political sphere, having a loan with China means maintaining a good political relationship that must be demonstrated in international forums.

China’s financial policy goes hand in hand with its strategic objectives in Africa, Asia, and Latin America. China not only offers loans, but it also signs free trade agreements and buys companies burdened by the pandemic crisis it helped to create.

Its strategy of rapprochement and linkage with the countries that owe it includes not only governments but also other important actors. For example, political parties, social organizations, trade unions, and business associations. Not to mention the growing military cooperation with ideologically like-minded countries.

In the case of Latin America, China is disputing the United States’ influence in the region. Economically, institutions such as the Inter-American Development Bank, under U.S. influence, are trying to meet the challenge, but China has already taken a big lead.

Now, in alliance with Russia, it is sending shipments of covid-19 vaccines, while the US struggles with its own internal problems and neglects its backyard. Where the U.S. neglects, China is there offering its help.

China has financed everything from the exploitation of oil fields and precious metal mines to the laying of railway lines and hydroelectric power plants. All these works have been built with Chinese technology and even Chinese labor.

In the last decade or so, Latin America has become its sales market. But it has also become an important source of raw materials and the destination of billions in investments.

Although rescuing its loans and investments has been a real headache – as it happened with Venezuela. The Venezuelan socialist regime squandered more than $50 billion in Chinese loans on the construction of infrastructure works that were left half-finished.

Now it no longer lends money hand over fist. He learned his lesson and manages his economic and political influence with less risk.

Its rapprochement with the largest Latin American economies, especially with Mexico, the main US trading partner in the region, shows where China is aiming its next steps in the commercial and political dispute between the two powers.