They try to compete with traditional advertisers and sponsors 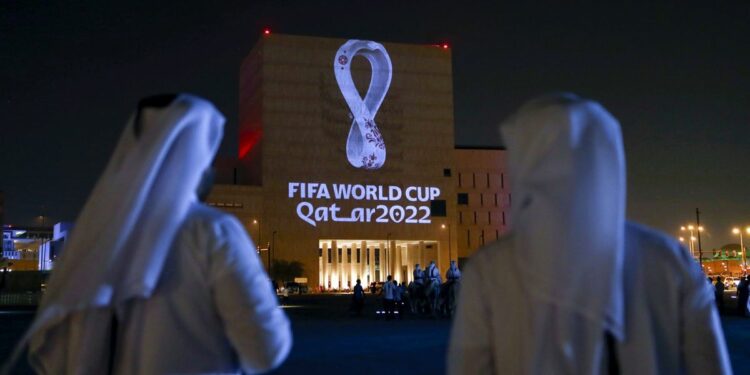 Cryptocurrency industry giants such as Binance, Coinbase, Crypto.com, FTX or eToro, are adopting an aggressive marketing strategy linked to sports, trying to match other prestigious brands investing in this sector.

Now million-dollar sports sponsorships are no longer the exclusive preserve of automakers, beer brands, soft drinks or telecommunications services. Cryptocurrency exchanges have also entered the competition for the sports marketing pie, seeking to increase their reach and popularity.

The investment in sports sponsorships by cryptocurrency companies in the last 18 months exceeds 2.4 billion dollars. All this effort – despite the bitter pill these companies have had to swallow this year due to the collapse of the market – points towards the massification of the industry.

“Cryptocurrency companies have committed more than $2.4 billion to sports marketing in the past 18 months, according to data compiled by Bloomberg, all in the name of attracting more users to their Web3 world: decentralized technology. are being heralded as the next chapter of the internet,” Bloomberg wrote.

For example, Binance already has deals with soccer stars such as Cristiano Ronaldo and clubs participating in the African Cup of Nations. While U.S. exchange Coinbase recently signed a deal with NBA star Kevin Durant.

This year it signed contracts with Major League Baseball, the NBA’s Miami Heat and the TSM esports team. Additionally, the drone racing league has received funds from the cryptocurrency platform Algorand.

In this way, the brands of exchanges and other companies in the blockchain industry are present in stadiums and matches of various disciplines broadcast on television or streaming. They are now more visible than ever to fans on screens, jerseys, commercials and other sports venues. At the same time, the star players of each sporting discipline themselves promote the companies with comments and mentions.

The incursion of crypto companies in sports began last year in parallel to traditional advertisers and sponsors. The lack of regulation has allowed crypto industry companies to fill the space left by gaming and betting platforms.

These companies were making important contributions to the sports sector. However, new regulations passed in most countries are preventing direct sponsorships to sports teams and e-gaming platforms.

For now, it seems far-fetched to think that the big players in the cryptocurrency industry will displace traditional advertisers. That is, Nike, Adidas, Coca-Cola, Pepsico, Renault, Mercedes or large financial firms.

The truth is that they have managed to enter the sports sector as sponsors through the front door. The benefits for sports and for the crypto industry can be easily calculated. Sport needs investors more than ever and cryptocurrencies a good refreshing bath.

The big cryptocurrency trading platforms are at least trying. There is no telling what will happen in the future, if the industry takes a second wind and takes off again more solid and strengthened.

In four years, sports sponsorships by crypto companies have increased by an incredible 7100%, according to CoinJournal

. “In 2021 alone, the top four crypto sports sponsorship deals were worth a combined total of $1.2 billion,” it added. 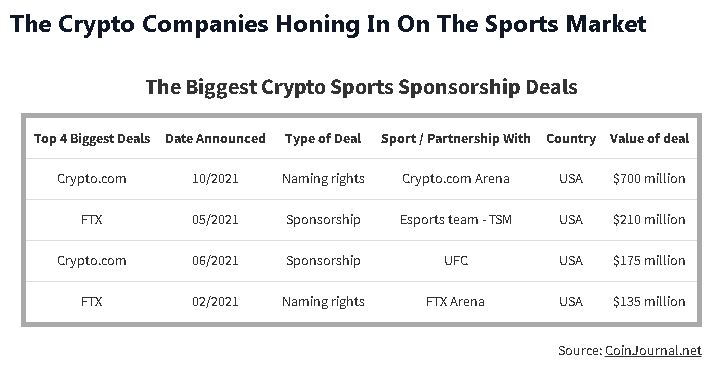 To date, the largest of these signed sponsorship deals pertains to the Crypto.com exchange. The company last year invested $700 million for the naming rights to the iconic Los Angeles multi-purpose sports venue, Staples Center.

AEG, the owner of this sports facility said in a press release on the occasion of the announcement of the deal that the agreement highlighted how the industry of cryptocurrencies and other digital assets was growing and expanding worldwide.

“There is this element of ‘We need to project staying power.’ Because there are a lot of people who don’t understand what cryptocurrency is, and they say, what is this,” Steven Kalifowitz, Crypto.com’s chief marketing officer, told Sports Illustrated in February.

He added, “People know that changing the name of a building means something. And that way, we communicate without having to tell them, ‘We’re safe.’ Because you can’t do that if you’re not a safe, solid company that’s here for the long term.”

Something similar was done by cryptocurrency exchange FTX, which acquired the naming rights to American Airlines Arena. The home of the Miami Heat basketball team was leased by Florida’s Miami-Dade County for 19 years.

Of the deal, FTX CEO Sam Bankman-Fried said that “this opportunity is more than just putting our name on an iconic building.”

He said it was also “an opportunity to bring value to the growing and diverse community of Miami and surrounding cities, as well as to join a champion community, a champion organization and a champion culture”.

Miami-Dade County Mayor Daniella Levine Cava revealed in a statement that the deal with FTX was for $90 million. 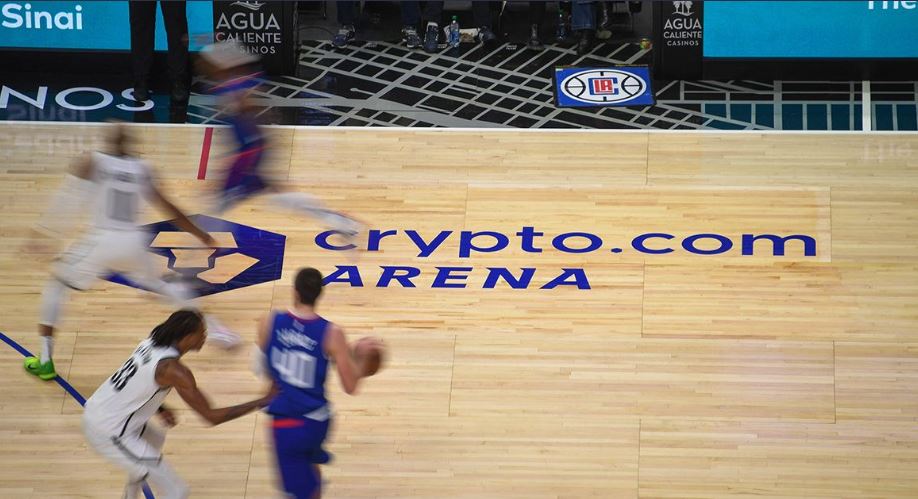 Compliance with the agreements is a question mark

Industry experts see this advance of cryptocurrencies in the sports world as a way to attract more users. Regardless some analysts have predicted that the crypto winter will extend a little longer than previously thought.

No one knows if a new challenge to the crypto market in the future could jeopardize the fulfillment of these agreements. Already, the National Women’s Soccer League (NWSL) experienced the first setback in this game.

Following Voyager Digital’s bankruptcy filing, the team is experiencing serious financial difficulties, as the cryptocurrency broker was one of the team’s biggest sponsors.

On the other hand, the NBA is currently one of the biggest beneficiaries of crypto sponsorships. “Coinbase committed to spend nearly $200 million over four years with the league, according to a person familiar with the deal who asked not to be identified because the terms are private, ” bloomberg said.

That figure is fairly close to the sponsorship ad spending of companies such as AT&T, PepsiCo or Anheuser-Busch. “Cryptocurrencies helped boost league sponsorship revenue by 14% last season from the previous year to a record $1.6 billion, IEG data show,” the publication wrote.