The decentralized science or DeSci movement is taking its first steps into the futuristic Web 3.0 and blockchain environment. 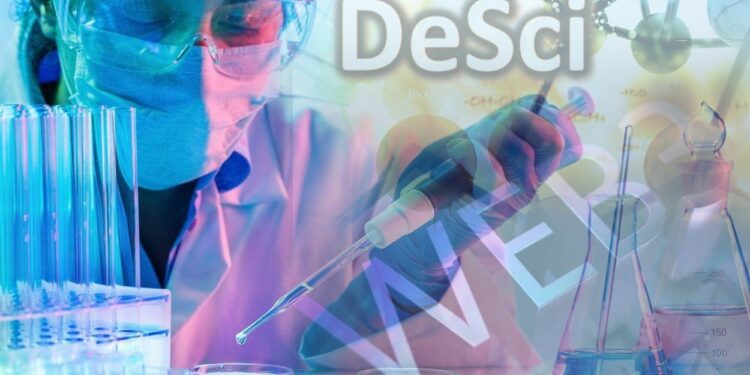 Decentralization continues to gain ground from technology to several important areas of human knowledge. In this case, the sciences would be taking a valuable step with the beginning of the DeSci movement, which would democratize scientific advancement.

The proposal looks like one of the most ambitious and the parallels with decentralized finance (DeFi) are not only related to concepts. Consequently, the purpose of both proposals (DeSci and FeDi) is exactly the same within their particular fields.

DeFi is an alternative to traditional finance. In them, everyone can participate regardless of their economic status. Decentralized sciences , on the other hand, seek to break the monopoly within the scientific world dominated by government and powerful corporations.

The role of Web3 in the rise of DeSci

The importance of Web3 within the world of DeSci is far-reaching. The new technology will allow proposals linked to scientific development to take shape. The latter would be expressed in decentralized autonomous organizations (DAO).

There are already some initiatives in the sector such as Molecule, VitaDAO and LabDAO, among others. This technology will allow advances and the development of important scientific theories to be carried out without the scrutiny of powerful companies that dominate the sector.

To get an idea of the revolutionary nature of this movement, it must be understood that funding sources are limited. In other words, authors with less recognition have little chance of receiving funding to further the development of their theories. In many cases, they are forced to sell their discoveries to others who generally do have access to funds.

With DeSci, young authors and researchers will be able to access funds from the organized scientific community in a decentralized manner. Another example that illustrates the role of this emerging proposal is access to peer review of articles and research. Currently, intermediaries dominate the peer-review sector, which results in an economic hindrance for many authors.

With decentralized sciences, authors and peers will be able to interact directly. It should be noted that peer-review is one of the tools that guarantees the viability (or rejection) of scientific theories by functioning as a filter.

Discoveries that will emerge from obscurity

Taking development out of the hands of centralized entities and putting it within the reach and under the control of the scientific community is a giant step. The new technology of blockchain and Web 3.0 are breaking through the old dominance over research into a field of full freedoms for creators. Another analogy of this movement can be made with art.

Artists are no longer dependent on prestigious auction houses that give priority to the “mainstream” . Instead, creators can create their NFT collections and place them on equal footing on marketplace platforms for those blockchain tokens. This has allowed thousands of artists to express their creation to the world without major obstacles.

New scientific researchers with fewer resources will now be able to work in a more unconstrained way with DeSci. Many scientists who were doomed to remain in obscurity under the conditions of the current selection model will be able to make contributions to human development. Web3 technology is likely to open the door to cures for dreaded diseases or totally alternative fuels for the industries of the future.

On the other hand, it is expected that scientists will have more time to deepen their research. It should be noted that more than 50% ofs cientists’ time  is wasted writing grant proposals, as most are rejected and must be tested over and over again at different sites. Some never get the push they seek for their theories and what could be great advances remain forever in obscurity.

Other hurdles presented by the TradSci environment

As you might guess, the traditional science world (TradSci), dominated by all-powerful entities, has guidelines for funding. This means that they will only selectively grant funds to developments that are in line with large corporations or governments and not societies.

“With the new technology, access to funding, publications and research will have a new face for academics and researchers.”

In that sense, scientists and researchers are often forced to mutilate their theoretical developments and adapt them to parameters. “Their access to funding is highly dependent on the impact of published work. This, in turn, drives academics to pursue mainstream topics rather than critical viewpoints“, explains the Nftevening portal cited above.

According to neuroscientist Sarah Hamburg’s view on the subject of DeSci and TradSci, she writes: “Ultimately, inadequate and unreliable funding reduces not only the amount of science being done, but also the biases chosen by scientists“.

In this way, decentralized sciences represent a great hope for thousands of people who make their living from science. Likewise, for all of humanity that depends on scientific development. With the new technology, access to funds, publications and research will have a new face for academics, researchers and the general public.

Another major problem facing researchers, academics and the general public is access to research. Information on advances in modern science is full of obstacles for millions of people. Private databases, fee-based or limited access websites are common.

Thus, you have that access is forbidden to the general public. The blockchain and Web3 have the capacity to become the most efficient database for the scientific community. It preserves the security and authenticity of major research developments, while opening them up to the general public.

Authors who wish to generate funds for their work, instead of going to the usual funding agencies, will be able to do so in DeSci with the sector’s own tools. In this sense, their works can be converted into NFT and sold to obtain funds.

One of the most popular cases in this field is the biologist Merlin Sheldrake. This specialist in plant and fungi studies converted the images of his work in the sector into NFT and traded them on the market. The funds he raised for doing so, he deployed to finance his growing research. The same could be done with outstanding scientific papers.

The possibilities opening up for the scientific world with Web3 seem endless. Although the aforementioned movement is still in its embryonic stages, enthusiasm is already beginning to show, as in the case of Sheldrake.

A call to scientists from all disciplines to join DeSci

Hamburg sent a letter to the journal Nature in which he invites scientists from all disciplines to approach the new movement. Among other things, he stresses that the creators of decentralized sciences are willing to respect existing scientific communities while harmoniously creating new ones.

“The DeSci movement aims to improve scientific funding; free knowledge from silos; eliminate dependence on profit-hungry middlemen such as publishing conglomerates; and increase collaboration across the field“, he explains in the other text quoted above.

For the portal Cointelegrahp the movement is so new that there are few references that establish consensus within it. In that, they explain, it is reminiscent of the early days of Bitcoin, in which heated debates were generated on topics that today seem simple to understand for anyone in the community. Many of the participants so far in the DeSci seem committed to the concept, whatever that means, the portal says.

Although it seems like a movement that generates great enthusiasm, its evolution requires that it be widely used. For the latter to happen, a long process of assimilation of the technology by academic sectors must be expected. For example, Bitcoin and the rest of the cryptocurrencies took more than a decade to get to where they are now, which is still modest in the extreme. The same can be said for DeFi.

The slow process toward tokenization of the sciences

In the scientific world, development is slow, since the method itself demands that the phenomena be observed in their full development. It will take many years for the scientific community to accept that their fields should be tokenized before they understand the real benefits of the process.

On this topic, Professor Phillipp Koellinger, co-founder of DeSci Labs, an initiative dedicated to the sector, expressed his opinion. Quoted in Cointelegraph , he states that “it is too early for a token-based model of science. Most scientists are risk averse and still unfamiliar with the Web3“.

In his view, tokenomic models for DeSci “must be well thought out” and “ideally developed“. This work must be done in conjunction with and approved by the scientific community to gain widespread approval and acceptance, he adds. He believes that for the vast majority of scientists, they accept that the current model is not aligned with the interests of science. Therefore, incentive capacity is the most powerful tool on the Web3.

To all this, he recommends the magic recipe of the sciences, which is time. There is nothing within the current sciences that has not gone through a rigorous time of observation and verification from multiple angles. The decentralized sciences model will not be an exception to the rule and even less so with the negative news circulating about the cryptocurrency environment.