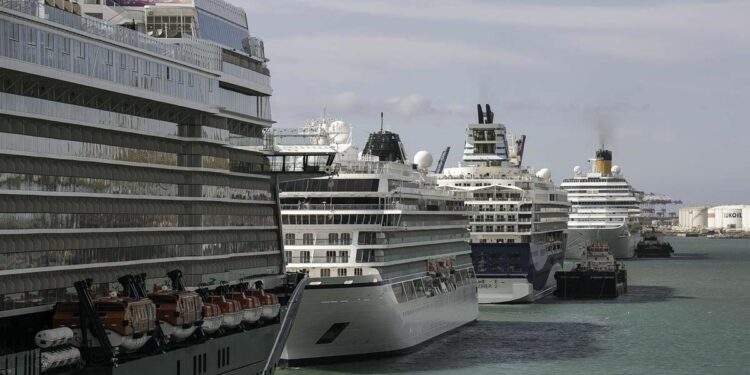 That’s right, strangely enough, the fleet of cruise ships plying the seas has a greater impact than aircraft dedicated to tourism.

The industry knows this and is therefore looking for a way out that could well be exploited by investors willing to bet on all the companies that revolve around decarbonization.

Here we will present various sustainable options to reduce its negative impact.

Could electric mobility conquer the seas?

What can the cruise industry do to reduce its negative impact on the environment? Electric mobility is a possibility, but it seems that the chances are low, either not for the totality of vessels or as a single alternative for the pollution that is being generated.

The maritime industry causes more than one billion tons of carbon emissions per year, which is more than 2.6 percent of the world’s total, according to analyses by the International Energy Agency.

To reduce these emissions, other fuels and energy sources are needed, and this is where electricity is a promising option.

Even more so when the International Maritime Organization, a UN agency, is committed to ensuring:

Although there are already vessels powered by electric motors that travel short distances, such as ferries, there is no hard data about their efficiency on international cruise ships that travel for several days and cover long stretches.

The question is whether they represent a viable alternative or what is needed to make them so.

For some analysts at the International Council on Clean Transportation, fighting pollution in the oceans, especially from cruise ships, is very important.

To what extent do cruise ships pollute the environment?

Traveling by ship can be a more affordable alternative for tourists who want to visit many cities in a single trip, rather than buying multiple airline tickets.

But, according to the International Council on Clean Transportation, the climate consequences are greater.

What’s more, even the most efficient boats are likely to emit more CO2 per passenger-km (Pax-km) than a commercial airliner.

A report published by the same organization indicates that the most spacious and efficient cruise ships emit about 249 g CO2 (pax-km), and the average carbon footprint of international aircraft is between 12 g CO2 (pax-km) and 135 g CO2 (pax-km).

The difference grows if one considers that cruise ships are also hotels that float. In that case, the emissions from this service must be added.

Research by Cornell University, located in Ithaca, NY, indicates that one night’s stay in a four-star hotel in the USA can mean almost 32 kg of CO2 emissions.

If two people stay in the same room, the number can be reduced by 50 percent.

Thus, research by ICCT expert Bryan Comer shows that an individual staying on a cruise liner for five nights and traveling 2,000 km, which emits 250 g of CO2 (pax km), would be responsible for 500 kg of CO2, or 100 kg of CO2 per day. An impressive number.

In this sense, if the same individual travels by plane, he/she will emit 160 kg CO2 on an average airline flight; and if we add the emissions from lodging (30 kg CO2 per night), we would reach a total of 150 kg carbon dioxide.

So, adding it all up, it would be more than 300 kg CO2, or 230 kg CO2 if you share a room. With such an example, an airline passenger would have to emit about 41 percent less carbon if flying and staying in a hotel.

If this person shares a room, the number would be more than 50 percent.

The impact of methane and the future of electric cruise ships

John Maggs, president of the Clean Shipping Coalition, a global international environmental organization that focuses exclusively on shipping issues at the International Maritime Organization (IMO), said that of the ships, cruise ships are the worst, because they demand too much energy for providing hotel services.

But while natural gas can reduce direct emissions that pollute the planet, the types of engines used by cruise ships leave a margin of unburned methane that escapes into the atmosphere. This is called “methane slip”.

It also indicates that what is emitted in the life cycle of such engines ends up being higher than if diesel or diesel, which contain low levels of sulfur, is used, according to ICCT research.

Meanwhile, research by the European Federation for Transport and Environment also says that liquefied natural gas as a marine fuel is particularly problematic because of losses from the engines.

According to the IMO, between 0.3 and 3 percent of diesel fuel is believed to leak from this combustion process and is absorbed directly into the atmosphere.

A large number of cruise ships that do not have liquefied natural gas use scrubbers that route air pollution into the water. The ICCT notes that the discharge water from the scrubbers is contaminated with polycyclic hydrocarbons and heavy metal strains that are linked to various types of cancer and reproductive dysfunction in marine mammals.

Electric cruisers: is there a chance?

Elise Georgeff, an expert member of The International Council on Clean Transportation, has explained that their research has shown that the size of the ship and the length of the route are the elements that most influence the feasibility of electric cruises.

The researcher points out that battery technologies currently in use already satisfy almost all ferries plying short routes and can drive the adoption of battery-electric vessels.

However, the technology of these devices is essential to boost the use of electric vessels in the cruise sector, as they are the most difficult to electrify due to their size and the distance they travel.

Georgeff indicates the feasibility of electric mobility by stating that shorter distances equate to less energy, therefore, fewer batteries are needed on board, making it better for small vessels, or ferries.

He also points out that while the concept is currently for smaller vessels, electric systems could be a viable alternative for long distance shipping, but new investments are needed.

There are opportunities here for all those specialist electrification companies looking for a niche market to strengthen their market presence.

Consequently, it is also an investment opportunity for those looking for new business segments to bet on for growth.

Cruise ships need to anchor at a dock for a period of time, which means that there is a possibility that these vessels do not use their engines and are connected to the local grid to run on electricity.

This is called “shore power” or “cold ironing” and is very important for ships that use large amounts of power while at anchor, such as cruise ships.

Beyond that, the challenge lies offshore. Depending on how far offshore the route is, a vessel may well not be able to run on batteries alone. But it is at this point that we need to think about the existence of technologies that complement energy production and can help save fuel, such as wind assistance, which has benefited maritime transport in recent years.

For Georgeff, there will be room in the future for many zero-emission technologies, such as battery-electric ships, but that this possibility will be based on a number of factors such as the availability of regional alternative fuels.

Ships that travel short distances and have fixed schedules, such as ferries and harbor vessels, will be easier to electrify by installing shore power.

The conversion will be much simpler than for ships that have long routes, use alternative fuels that are renewable, either ammonia or green hydrogen, and use fuel cells.

ICCT tests conclude that the conversion is complicated, but multiple investigations show that this future is feasible.

One such analysis has revealed that 42 percent of all container ships in the Pacific Ocean can complete their voyages using only liquid hydrogen and fuel cells, and that this number rises to nearly 100 percent if a refueling stop is added.

So battery-electric ships are not the only alternative; large ships are others that can achieve zero emissions using alternative fuels.

Battery chargers in the middle of the ocean

What is known is that there are already ships that propel them with electric motors. They travel short routes and show their efficiency on fixed routes.

In relation to cruise ships, the Yangtze River Three Gorges 1 reinforces Georgeff’s argument: it is the largest electric-powered cruise ship in the world and contains the largest battery capacity on the market, and even has charging stations on the river to recharge and continue its route.

Offshore power supply is the next challenge they must solve to make cruise ships with long, electric-mode legs feasible in the long term. Moller-Maersk, the largest international business conglomerate in the area of maritime transport and energy, has presented a project that, based on a wind farm, like those already existing in various maritime areas of the world, can generate a recharging system to electricity for its ships at sea.

This could be replicated for cruise ships.

How to lower gas emissions from ships

According to Georgeff, cruise ships would have to connect to the shore power grid as it becomes available (and that it can support the electricity demand of such a large vessel).

In addition, these ships would need to start using emission-free alternative fuels, but he notes that this is not feasible in the next few years.

Also, he assures that it is very important to greatly reduce water pollution from cruise ships and to guarantee equality in all areas through which these vessels pass and from all sources of pollution.

He explains this with an example: cruise ships traveling from Seattle to Alaska go through Canadian waters, but the discharge standards in Canada are different from those in the U.S., so they can discharge different amounts of pollution depending on the different areas along their route.

While this policy no longer exists, Georgeff believes it may be a viable alternative to transitioning to renewable energy.

Meanwhile, the European Federation for Transport and Environment says that this step also needs legislation that can encourage investment in infrastructure to allow renewable fuels to be competitive in price and feasibility, as costs are currently very high relative to fossil fuels.