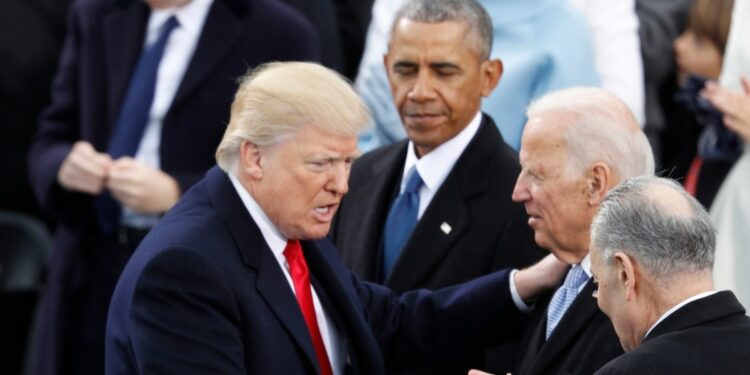 Almost two years into Joe Biden’s presidency, former officials and experts point out that the Democrat’s plans for strategic priorities are striking because they resemble the actions of the previous administration, that of Republican Donald Trump.

When he was campaigning, Biden had promised to end the decisions made by the Republican and he delivered, but only in certain aspects of foreign policy.

For example, he repaired alliances, especially with Western Europe, which Trump had weakened with his statements on the preeminence of the United States and his criticism of other countries.

Also, although only in recent months, Biden made an effort to position himself in a coalition applying sanctions against Russia for the invasion of Ukraine.

In addition, the Democrat speaks loudly about how bad autocracies are doing, is dedicated to promoting how important democracy is, and calls for global cooperation on issues such as climate change and the covid-19 pandemic.

All this on the side of differences from Donald Trump’s administration.

But looking at the bigger picture, the result of the analysis is different. Very different.

If you look more closely, the Democratic administration did not make major modifications to U.S. foreign policy, demonstrating how complicated it is for any government to choose new directions in this regard.

Some of this has been evident in recent weeks during Biden’s tour of Saudi Arabia and Israel, which was aimed at further strengthening ties with both countries. If you look closely, it is just a continuation of something that Trump had already started in the so-called Abraham Accords.

In Saudi Arabia, the U.S. president has met with the crown prince, Mohammed bin Salman, despite his promise to sideline that country because of repeated HR violations, particularly for the murder of a journalist from The Washington Post a few years ago.

U.S. intelligence agencies have concluded that the prince ordered the assassination, but Biden and the rest of the White House cared little.

Washington continues to support the Arabian military in the Yemen war conflict, even though one of Biden’s pledges was to end that backing for Saudi Arabian airstrikes that killed civilians.

Some former Republican officials and other pundits have praised the consistency, arguing that, despite any shortcomings the administration of Donald Trump, who at the time held the title of commander in chief, had been correct in its assessment of the importance of the issue to U.S. interests.

Others, less optimistically, point out that the policies of the current Democratic president have aggravated the inconsistencies in foreign policy and have deviated from the principles originally declared by the current president.

For example, lawmakers in his own party have criticized his meeting with Salman and cooperation with the Saudi military, and administration officials have spoken out in favor of a UN-mediated truce to end the war in Yemen.

One example is Emma Ashford, a researcher at the U.S. think tank focused on international affairs, the Atlantic Council, who noted at a recent conference in Washington that as the months passed, Biden failed to deliver on several of his campaign promises and maintained the status quo in Asia and the Middle East.

Both governments, Trump’s Republican and Biden’s Democrat, had to face the issue of how to maintain U.S. global dominance, which at certain times seems to be in decline.

New and old hotspots of conflict in U.S. foreign policy

China rose in the US foreign policy consideration and is a new counterweight; and Russia, hand in hand with the invasion of Ukraine, has been emboldened.

The former U.S. president’s national security plan had thus officially reoriented foreign policy with the idea of making it a leadership competition with Russia and China.

He sought to remove terrorist groups and other non-governmental actors from the scene. Current President Biden, for his part, has not changed that stance and is continuing the “Trump momentum.” The Russian-Ukrainian war itself demonstrates this.

The White House delayed the release of its own national security plan, something that was expected to be presented early this 2022.

Those who have the responsibility for this strategy, evidently, analysts understand, are rewriting it from the beginning of the war conflict in Europe.

With the same logic as Trump, it is believed that the final document will continue to have as a key point the competition between the three powerful states.

The current US president has already indicated several times that China is his biggest competitor, something that Antony Blinken, Biden’s Secretary of State, has also recently reiterated.

And Russia, for its part, is considered the greatest threat to the security of the US and its allies.

The Blob: the big problem in changing foreign policy

Some researchers point out that the usual similarity between presidencies on this issue is a result of conventional ideologies and the “herd thinking” that comes from decades of the country having a dominant bipartisan foreign policy group in Washington.

But not everyone agrees. Others point out that external conjunctures, including the behavior of governments in other countries, the ideas of voters in the United States and the influence of corporations, leave U.S. leaders with little choice.

They do that, or they do nothing.

Stephen Biegun, former U.S. Deputy Secretary of State from 2019 to 2021, said there is a “force of gravity driving the measures to get to the same place.” And he added that they continue to be “the same conflicts, the same planet.” For the former Trump official, governments continue to have the same tools to influence the population with the aim of achieving the same results.

With the commitment to withdraw their army from Afghanistan, both leaders guaranteed the wishes of the majority of the population, which was tired of twenty years of warlike conflicts.

For Biden, the decision also meant an opportunity to face unfinished business.

As vice-president, he defended the idea of repatriating the troops, something that was in line with Obama’s idea of ending eternal wars, although the Army generals were not in favor.

Despite the troubled withdrawal in mid-2021, when the Taliban took control of the state, polls showed that almost the entire U.S. population had supported ending their military presence there.

Both Trump and Biden advocated for less military involvement in conflict zones. But both reached the limit of that idea.

And the U.S. military in Iraq and Syria are still there.

Brian Finucane, an advisor to the NGO International Crisis Group who has also worked on military affairs as a lawyer at the State Department, indicated in early June in an interview that there is enormous skepticism about the war on terror from senior officials in the current U.S. government.

He believes that they are not thinking about undertaking structural reforms to put an end to that conflict.

Finucane noted at the time that reform could be a great opportunity to revoke the 2001 authorization for unlimited war that was granted to the executive branch by the legislature after the World Trade Center attacks and is still in effect.

With reference to this authorization, he added that if the Biden administration does not take action on the matter, as long as the rule remains, it will be used by future administrations.

And the problem is that other leaders may seek to further expand the war on terror and take advantage of it.

On Iran and its nuclear project, the most pressing issue in the Middle East, Joe Biden took a different path than the former U.S. president.

The administration negotiated with Tehran a return to a nuclear contract agreed in Obama’s administration, which Trump later dismantled, leading the Asian country to continue with its uranium enrichment process.

But the talks stalled. And the U.S. president said he is going to keep one of Trump’s main moves against Iran’s military, the labeling of the Islamic Revolutionary Guard as a terrorist organization, which today is a stumbling block for the new agreement.

China-related measures are the most visible example of the continuity between the two administrations.

The State Department maintained the Republican administration’s “genocide” labeling of China for its repression of Uighur Muslims.

Biden’s bureaucrats continue to send U.S. naval ships through the Taiwan Strait and support the island by selling arms aimed at deterring an invasion from China.

Most controversial is the tariff issue: Biden maintained the duties levied on products from China in the Trump era, despite the fact that some economists and many senior officials, such as Janet Yellen from the Treasury secretary, have questioned their end and impact.

The current administration and its policy advisors are aware of the increasingly prevalent ideas opposing free trade in the U.S. that Trump used to win votes.

That made Biden unwilling to rejoin the Trans-Pacific Partnership Treaty, a trade agreement among 12 countries on the Pacific Ocean rim that Obama has helped organize for a strengthening of economic competition against China.

But both Trump and many progressive Democrats, have rejected it.

Experts say the White House needs to offer Asian countries better trade deals and access to the U.S. market if it wants to stand up to its rival’s economic clout.

Kori Schake, a member of the center-right think tank American Enterprise Institute, pointed out in a video conference a few weeks ago that the Trump and Biden administrations failed to adopt the trade and economic measures that America’s Asian partners have been demanding for years in order to lessen their dependence on China.

Both administrations “are over-militarizing the China issue because they are not being able to figure out the economic part,” he said.

The European continent is where the current president differed from the previous one.

At times, Trump’s management was contradictory on Europe and Russia: while the former US president praised Russian President Vladimir Putin, criticized NATO and retained military support for Ukraine in order to gain domestic political benefits, some officials were working in the opposite direction.

Following another path, Biden and his administration uniformly reaffirmed the importance of transatlantic alliances, something that helped them send sanctions and weapons to Ukraine for its confrontation with Russia.

Alina Polyakova indicated a few days ago that she has no doubt that words and actions matter. “If allies don’t have confidence that the U.S. will uphold Article 5 of the North Atlantic Treaty Organization and defend an ally, it doesn’t matter what is invested,” said the president of the Center for European Policy Analysis (Cepa).

Finally, the biggest distinction between the two presidents, and the aspect most analyzed by U.S. allies and adversaries, is in their ideological stance on democracy.

Trump has praised autocrats and broken with democratic traditions prior to the insurrection that happened in the White House in January last year, something that congressional investigators think he orchestrated himself.

Biden, meanwhile, placed democracy promotion at the center of his foreign policy ideas, and in late 2021 welcomed politicians from more than 100 nations to a “Democracy Summit.”