The Latin American e-commerce giant's shares could be among the big winners in the medium and long term. 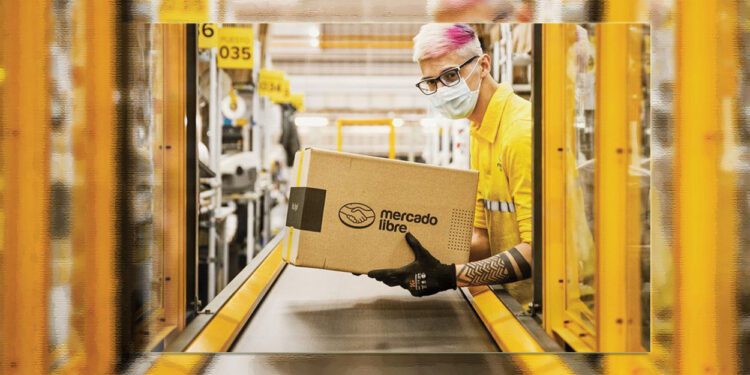 As Internet access advances in Latin America, people are becoming more interested in e-commerce. Online shopping is becoming more and more common and one company is emerging as the all-powerful player in the sector: Mercado Libre. This Argentine firm has been around for a long time, but its growth is linked to the advance of new technologies.

The company’s board of directors has not been shy when it comes to approaching new technologies in order not to lose pace with development. In this regard, this year it announced the launch of its own Mercado Coin token for its Mercado Pago platform. As reported by this media, the virtual currency would be in the testing phase and it would not be long before it is launched to its entire Latin American audience.

The company, often called the Latin American Amazon, has an almost total position of dominance throughout the subcontinent. Retailers large and small consider their presence on the platform a must and few have not taken the plunge. During the pandemic, affiliation of merchants of all categories was abundant and the trend does not seem to be slowing down. The dominance of the region’s main markets seems insurmountable for the company’s various offshoots.

Why Mercado Libre could be the star investment?

For many equity holders, long-term investments are a fundamental part of their portfolios. Few companies are worthy of consideration in that selection. With all its potential in an almost virgin market for online commerce, investing in Mercado Libre could be one of those fortunes secured for the future.

As already highlighted, it is not only a recognized online commerce platform, which is already a good thing. It also has a payment platform (Mercado Pago), a logistics service (Mercado Envío). As if that were not enough, they also have a commercial lending platform. In terms of money, the figures are of great magnitude considering the Latin American public.

In that direction, the main platform experienced a merchandise trade volume of $8.6 billion during the second quarter of the year. In parallel, Mercado Pago processed $120 billion in annualized volume. Of the latter, two-thirds were funds originating outside the platform. Both the payments application and the commerce platform are going through an accelerated growth phase.

Mercado Libre’s rate of ascent could be seen as a great buying opportunity for its shares. This is because people in the region are starting to focus their attention on online commerce and are quickly moving away from seeing it as something circumstantial.

One aspect that cannot be lost sight of is that Brazil is one of the most important economies in the world and stands out among emerging markets. Its power in the area of raw materials and production diversification make it a permanent and mass creator of high-end consumers. Dominating that market as MeLi does is a guaranteed boost for any business.

Other outstanding figures of Mercado Libre

Among the fast-growing arms of this company is the aforementioned lending platform: Mercado Crédito. It is one of the most recent components and, at the same time, one of the most outstanding performers. Over the past year, the platform tripled in size, according to specialized portals, and has $2.7 billion in outstanding loan balances.

But the thing that many analysts consider magical is that all these offshoots of the company are in their early stages. That means that any investor who puts capital into it will join a select group of pioneers in a company that looks promising for the future. In other words, the potential to tap into a market that could grow rapidly over the next few years, coupled with the company’s current nascent stage, gives the company’s shares a particular attraction.

Although the company’s stock has a downside related to the end of pandemic confinements, this is not a malady unique to MeLi. At this point, analysts are beginning to see the current state of the sector’s stock, if not at the bottom, at least at something very close. That could translate into Mercado Libre’s stock being an attractive option because it is an early-stage business and because of the conditions that set back the entire market.

Either way, MeLi’s merchandise volume is barely 6% compared to Amazon. At the same time, Mercado Pago processes payments of 10% compared to those processed by PayPal. This reaffirms the thesis that the road ahead is huge.

The company is to be reckoned with because it is not limited to one platform, but has diverse ramifications. Thus, the well-earned nickname of the Latin American Amazon no longer seems to fit the company’s own projections. The U.S. online commerce giant does not have such a variety, and in that, the growth ambitions of the Argentinean company’s board of directors can be seen.

“With all its ramifications, MeLi is not only the Latin American Amazon, but also the Shopify, Paypal and Square concentrated in a single company”

In any case, it’s not just the Amazon, but MeLi is also the PayPal, Square, Shopify and several other companies rolled into one. Again, all of these are unraveling at a very early stage of their growth. Digital technologies aim to continue to grow in the subcontinent and the industry landscape is constantly growing.

According to a report by Americas Market Intelligence, by 2025, online commerce will grow by 25% in Latin America, starting in 2021. To get an idea of the magnitudes, it should be noted that Brazil alone experienced an e-commerce volume of $153 billion in 2021. Other economies in the region also had important figures, including Colombia, Argentina and Chile with $22.4 billion, $18 billion and $15.65 billion in the same respective order.

25% above these figures by 2025 could become a catapult for Mercado Libre’s business. All this must be added to some factors such as the company’s firmly established leadership and the fact that there are 20 countries in Latin America, whose markets could be fully conquered by the company.

As said at the beginning, the company is one of the most focused on innovation and initiatives in the digital area. The creation of a token to keep pace with the growing acceptance of digital currencies in economies such as Brazil, is an example. It was precisely in the Portuguese-speaking country that the currency project took its first steps.

Afew hours ago it became known that the Argentine multinational is considering processing business payments on WhatsApp. Thus, the company reported that talks with Meta (owner of the messaging platform) were advanced and the business would be carried out in Brazil.

According to Reuters, senior executives of the company confirmed that the proposal is designed for users to find businesses on WhatsApp. This would be done through a directory service that would allow payments to be made with debit and credit cards. The executives did not offer further details or the profit margin that the business could bring to Mercado Libre.

It is noted that this initiative seems to be in line with Meta’s plans to put WhatsApp to generate revenue in the medium term. Mark Zuckerberg’s company suffered one of the worst (surely the worst) year in its history in 2022. Since January, bad news became a daily occurrence for the technology company, which is thirsty for new and fresh sources of revenue.

From this, it can be assumed that the chances of this initiative materializing are high. Be that as it may, the details of the talks are being kept under wraps and are likely to be in the public domain if they materialize.

The Brazilian market, with its peculiar characteristics, becomes an ideal place for any company that thinks ahead. This implies that rivalries and wars for dominance will not be a strange element. Precisely, MeLi has just started a conflict against none other than Apple, the largest company in the world in terms of market capitalization.

On Monday of this week, the Latin American company confirmed that it sued the U.S. multinational in the Brazilian and Mexican markets. In a note, quoted by Forbes, the company appealed to harsh terms in accusing Apple of monopoly. “Apple] abuses its monopoly in the distribution of applications for iOS devices, imposing a series of restrictions,” reads the statement.

Thus, the company turned to the legal bodies of these two countries in the region to sue the Cupertino company. The unexpected rivalry, as Forbes calls it, is not a new stone for Apple, which is besieged from all fronts for the secrecy of its services.

With this, it is clear that the two multinationals have their eyes on the same markets. Mercado Libre could take advantage of its influence in the region to avoid the consolidation of other players while it tries to perfect its various branches.

All this context makes the company’s shares highly coveted.

This work is for informational purposes only and does not constitute investment advice.