Amash to Feinstein on Fourth Amendment Pity Party: ‘Hypocrites Like You Are Why the Public Doesn’t Trust Congress’

Home » Amash to Feinstein on Fourth Amendment Pity Party: ‘Hypocrites Like You Are Why the Public Doesn’t Trust Congress’

We’ve entered Mel Brooks level government comedy. Can someone play a sad song on the world’s smallest violin for this woman?

In the ultimate dictionary definition act of hypocrisy, head of the Senate Intelligence Committee Sen. Dianne Feinstein (D-Calif.) is complaining that the CIA violated her committee’s Fourth Amendment rights when she claims the agency removed several key documents from committee computers.

She actually found it within herself to be surprised and outraged that this could happen…to her. Accusing the CIA of breaking federal laws and “undermining the constitutional principle of congressional oversight” Feinstein said, “I am not taking it lightly.” The Department of Justice is reportedly investigating the matter.

Feinstein, if you recall, has been a huge proponent of the NSA’s overreach and basically every government big brother spy program you can imagine in recent years…when it’s aimed at the American people, of course. Here’s just one example from not even a month ago in the LA Times:

Sen. Dianne Feinstein (D-Calif.) offered a full-throated defense of the government’s collection of data on billions of American phone calls, saying Wednesday that the National Security Agency’s practices have safeguarded the nation without trampling on civil liberties.

“What keeps me up at night, candidly, is another attack against the United States. And I see enough of the threat stream to know that is possible,” Feinstein said at a Pacific Council on International Policy dinner in Century City.

Apparently that same heartfelt “full-throated defense” of government spying overreach ‘safeguarding the nation’ does not apply to herself and her committee, however.

In response to Feinstein’s hypocritical outrage at being targeted by the intelligence community, Rep. Justin Amash (R-Michigan) sent this message out on his official Facebook page: 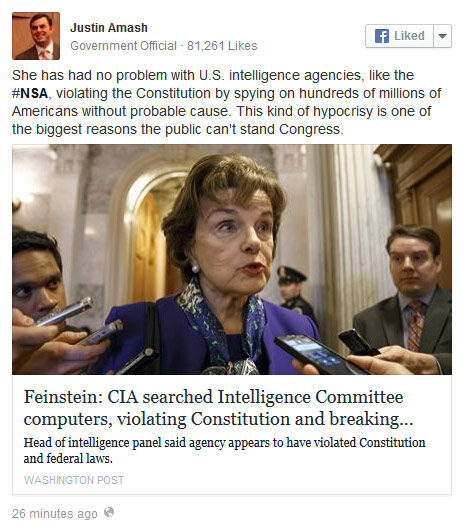 “She has had no problem with U.S. intelligence agencies, like the ‪#‎NSA‬, violating the Constitution by spying on hundreds of millions of Americans without probable cause. This kind of hypocrisy is one of the biggest reasons the public can’t stand Congress.”

It’s one of a plethora of reasons, but still. At least someone up on that hill gets it…

Former NSA Contractor Edward Snowden also came out a few hours ago to say that Feinstein is a total hypocrite.

The only person that does not seem to realize it by now is, sadly, Sen. Feinstein.