America to Take in 100,000 Muslims. Be Prepared For ISIS Massacres to Happen In the US Soon

Obama has ordered that America take in 70,000 Islamic refugees. Just today, press secretary Josh Earnest said that the United States would “accept at least 10,000 refugees in the next fiscal year,” which begins October 1st; however, the whole number that has been authorized is 70,000. But John Kerry, in a closed-door meeting, said that the number could be raised even higher—to 100,000. According to one report:

Earlier, Secretary of State John Kerry said, at a closed-door meeting on Capitol Hill, that the total number of refugees taken in by the United States could rise to more than 100,000, from the current figure of 70,000.

When these “refugees” come, what do you think will happen? The French police are already looking for an ISIS agent amongst the refugees who are heading for England.

An Islamic State combatant believed to be in Calais is being actively hunted by the authorities. … He left Syria at the end of August and hopes to reach Britain where he intends to commit terrorist acts. …He is the subject of most wanted person notice and is considered a threat to state security.

Hungary’s most popular national TV channel, M1, reported Tuesday thst Islamic terrorists are amongst the refugees and are disguising themselves as refugees:

Islamist terrorists, disguised as refugees, have showed up in Europe. [The] pictures were uploaded on various social networks to show that terrorists are now present in most European cities. Many, who are now illegal immigrants, fought alongside Islamic State before

Here is a photo of one of the terrorists, who is said by Hungarian media to be disguising himself as a refugee: 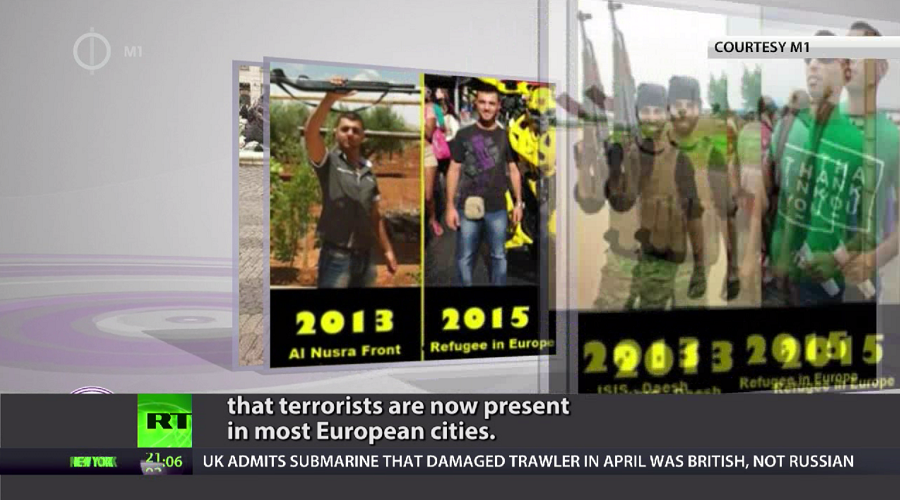 One of the terrorists, Laith Al Saleh, 30, was reported by the AP to have “led a 700-strong rebel unit in Syria’s civil war.” No doubt this is a terrorist, and there is no doubt that the US will be getting these types in its land. Reg. Whitaker, a national security specialist, said:

It is possible that among the stream of wretched refugees desperately looking for a way, that there might be some who aren’t exactly the people we want to bring in

Stephen Harper, Canada’s Prime Minister, is also expressing concerns that amongst the refugees there are terrorists, saying:

When we are dealing with people that are from, in many cases, a terrorist war zone, we are going to make sure that we screen people appropriately and the security of this country is fully protected.

And don’t think for a second that the officials in Washington know the danger and the threat. The American Director of National Intelligence James Clapper said in Washington:

We don’t put it past the likes of ISIL to infiltrate operatives among these refugees… That is a huge concern of ours. … I’m not as uniformly confident about each European country that is going to be faced with welcoming and allowing refugees into their country… This is a huge issue for all kinds of reasons.

America will not just be receiving Syrians, but other people from the Muslim world, as well—quite possibly Pakistanis and Afghans who have inundated the refugee multitudes. America is going to be taking in people who have seen beheadings, conducted beheadings, and who are desensitized to this violence. So don’t be surprised the next time you see Islamic violence.