In response to emails it received from viewers, News 4 investigated a Missouri license plate reading ‘JIHAD 1’. 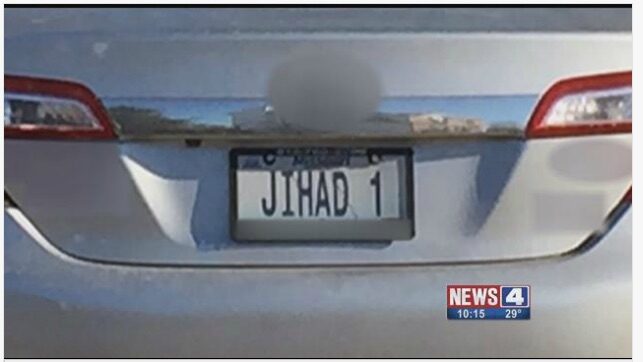 “… examined the policies for granting or denying personalized license plates [and] made several requests for an on-camera interview with a representative of the Missouri Department of Motor Vehicles on the State’s reasons for allowing the JIHAD plate, but no one was made available to talk.”

The Muslim couple who owns the license plate, told KMOV-4 that they named the plate after their 14-year-old-son. They also told the news crew off-camera that “‘jihad’ has nothing to do with terrorism and has another spiritual meaning in Islam.”

Of course, the St. Louis Chapter of the Council on American-Islamic Relations (CAIR) weighed in on the matter. The Department of Justice named CAIR as an un-indicted co-conspirator in the terror-financing case of the Holy Land Foundation, and the United Arab Emirates has labeled it a terrorist organization. Indeed, CAIR has been linked to the terrorist movement, the Muslim Brotherhood.

Several weeks later, KMOV-4 discovered another license plate was issued, this time, reading, “HAMAS,” which is the name of a Palestinian terrorist organization according to the U.S. State Department, and its primary funder is Iran.

The Missouri Department of Motor Vehicles again refused to comment as to why it allowed both of these license plates to be issued but has rejected thousands of others. The State has also not explained why it rejected the plate, “J1HAD,” in 2009, but why “JIHAD1” was now allowed.

The State referred News4 to a 2001 court case in which the court ruled that the state cannot censor license plates. In that case, a license plate, ‘ARAYAN,’ was permitted under the right to free speech protected by the First Amendment.

However, the First Amendment does not protect hate speech or incitement to violence, which could include names referring to movements that advocate both. Hamas and Jihad are both directly related to terrorism specifically related to the political ideology of Islam. And, a non-elected bureaucratic agency, and the courts, do not have the final word on this: “We the People” do.

Article reposted with permission from Constitution.com