It is the fourth anniversary since the ISIS terror attack in Garland, Texas, on May 3, 2015. The terrorists’ target was the First Annual Muhammad Art Exhibit and Contest, a public celebration of the free exercise of speech. Why did the Obama administration fail to protect the public? Taxpayers may find out, thanks to an injured security guard’s appeal after dismissal of his lawsuit against the USA / FBI.

On appeal, the government has yet to file a response; but the FBI’s arguments likely will reiterate the trial level Judge’s conclusions in the dismissal:

“The United States is immune from suit absent its consent, and the terms of that consent define a court’s jurisdiction over claims brought against the United States.” The Federal Tort Claims Act “contains a waiver of sovereign immunity … The FTCA’s waiver is subject to several exceptions … One such exception is the discretionary function exception … whether or not the discretion involved be abused.” Dismissal pp. 6-7

An example of a “discretionary function” was the FBI agent’s message of “Tear up Texas” to terrorists. The FBI described the message as “innocuous” for being passive encouragement for Jihad. 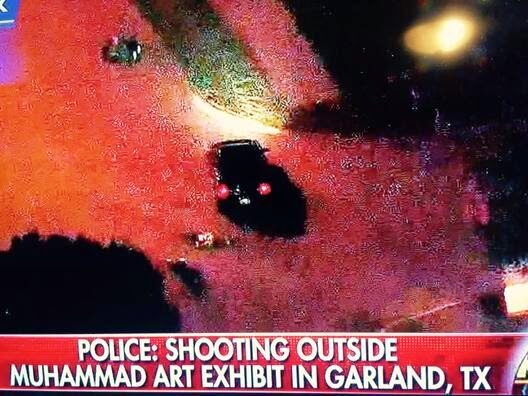 As the FBI’s “Declaration notes, ‘FBI policies allow investigative personnel wide discretion to determine operational details of how to conduct an investigation.’ Plaintiff contends, however, that UCE-1 exceeded his discretionary authority by participating in Simpson’s and Soofi’s violent acts, including inciting Simpson by sending the ‘tear up Texas’ message, reassuring Hendricks that he was armed at the event, accompanying Soofi and Simpson to the event, and conducting reconnaissance at the event.” Dismissal pp. 8-9

The “Court finds that the policies identified by Plaintiff, along with the National Security Undercover Operations Policy Guide, contain elements of discretion and that the FBI acted within the scope of that discretionary authority.” Dismissal p. 11

The “Court grants Defendant’s Motion to Dismiss without prejudice for lack of subject-matter jurisdiction.” Dismissal p. 19

The trial level Judge’s conclusion, lack of jurisdiction, was based in part on these errors:

“The district court erred in declining to recognize the ‘state-created danger’ theory, which holds that the government has a constitutional duty to provide protection ‘from third-party violence when [law enforcement] officials affirmatively act to increase or create the danger that ultimately results in the individual’s harm.’ … The district court declined to adopt the doctrine because ‘the Fifth Circuit has consistently side-stepped the question of whether to adopt’ it.” Brief p. 28.

“The district court’s failure to apply the appropriate standard for factual construction was not a harmless error. At this pre-discovery stage of the litigation, there are many factual ambiguities in relation to the discretionary function exception that have yet to be resolved. This is evidenced by the fact that the district court conducted a fact-intense analysis of the discretionary function exception that ran on for over eight-and-a-half pages … Every ambiguity the court resolved ‘in favor of the sovereign’ is rendered suspect by its failure to apply the appropriate FTCA standard.” Brief p. 33.

“The FBI guidelines are intended to provide practical guidance to federal agents, but the court’s interpretation of the guidelines stretches their meaning so far as to render them useless. Applying the court’s logic, the FBI’s prohibition on ‘participation in an act of violence’ leaves agents with discretion to act as accomplices in a mass shooting, and the agency’s mandate that agents ‘shall try to discourage [a known intent to commit] violence’ leaves agents with discretion to incite and participate in the violence. If the district court’s interpretation is correct – if FBI agents have the “discretion” to do the exact opposite of what agency guidelines mandate – there is no reason for the FBI to have guidelines at all.” Brief pp. 41-42.

The trial level Judge’s dismissal prevented the FBI from having to explain: But-For the FBI’s undercover agent, UCE-1, having “volunteered” to facilitate a “protest,” a code for murder, and enlisted Elton Simpson and Nadir Soofi, would there have been an attack of bullets, resulting in the security officer, Bruce Joiner, having been shot in his leg, and his incurring Post Traumatic Stress Disorder?

The USA / FBI owes explanations to many victims of the first ISIS-credited terrorist attack in the United States. Victims include: (a) Bruce Joiner, the security guard, shot; (b) Pamela Geller and Robert Spencer, of the American Freedom Defense Initiative, sponsors of the event; (c) Bosch Fawstin, winner of the contest, as well as hundreds of artists including this author; (d) hundreds of attendees at the event; and (e) We, the taxpayers, who have a right to know details of our government’s submission to Jihad via political correctness.

Appellate Court, please reverse the trial court’s dismissal, and remand for discovery in this case.

Gerald Lostutter is a Florida licensed attorney, college professor, journalist, and patriot life member (endowment level) of the National Rifle Association. This article does not create an attorney-client relationship. You should consult a licensed attorney for advice.

The Truth About Gun Control, the Dick Act of 1902, Bills of Attainder & Ex Post Facto Laws