The family of 29 year old Bethany Arceneaux decided to take matters into their own hands after Lafayette Police in Louisiana failed to rescue her. They stormed the kidnapper’s home as he was stabbing Bethany. They exchanged gunfire resulting in the death of the kidnapper and the rescue of Bethany.

Bethany Arceneaux had been abducted earlier in the week in front of her child’s daycare by 29 year old Scott Thomas, the father of her 2 year old son. The child was left in the car following the abduction. 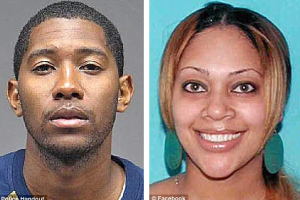 A tipoff sparked the search for Bethany, in an abandoned house, in Duson, Louisiana on Friday.

“We found her. We went and got her in that house. We kicked doors down. It was like a movie unfolding,” Bethany’s brother Ryan Arceneaux told reports. Ryan was one of about six family members that descended on the house. “If we would have waited, she would have been dead.”

The family described hearing scream as they entered the home and found Bethany “bloodied and repeatedly stabbed,” according to The Advertiser.

According to KATC, “Thomas and Arceneaux have a violent history well documented in police records. Not only did Arceneaux file several reports, documenting alleged abuse by her ex-boyfriend, Scott Thomas, she also filed a restraining order against him.”

The New York Daily News reports on how the family responded:

The Arceneauxs organized a search effort for the woman. They posted fliers throughout their town and sent out rescue missions. They were passing near Thomas’ hiding spot when they heard a woman yell from inside.

About a dozen family members stormed into the home. When Thomas began stabbing his ex-lover, it sparked a confrontation.

Lafayette Parish police are still investigating what happened next. According to KLFY, the family members say they shot Thomas to prevent him from killing Bethany.

“I can just imagine how chaotic that confrontation was. The person who acted in defense of Ms. Arceneaux is a relative, a close relative to her. So I can imagine his emotions were probably high, and everyone’s levels were very escalated,” police spokesperson Capt. Kip Judice told KATC.

Thomas was dead before a police SWAT team could arrive on the scene.

No charges have been pressed against anyone in the Arceneaux family. I am very glad to hear this news! They should be commended, and people in the community should learn a valuable lesson about protecting their own, rather than relying upon the police to do that. After all, the police are not protectors, but law enforcers. 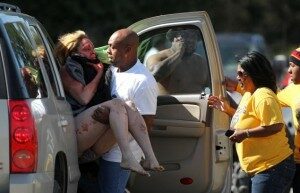 Ryan Arceneaux tenderly places his wounded sister in a vehicle.

Some family members found it upsetting that they were able to locate Bethany before police. However, Cpl. Paul Mouton, a Lafayette Police Department spokesman, said, “While we were looking on one side, they were looking in another, and they came upon her. It just so happens where they were looking was where she was found. If we weren’t looking at all and they were searching, that would be different.”

Ryan Arceneaux says that his sister was “shook up,…sliced up, but she’s alright.”

Bethany’s aunt, Monica Arceneaux-Henry, exclaimed, “I’m so happy. God is good. We followed our faith and believed she was alive. God answers prayers.”

The rescue of Bethany Arceneaux by her family is a reminder of why citizens need to keep and bear arms without restrictions. The family was free to save the life of Bethany and put an end to the criminal activity of Scott Thomas. Additionally, they spared the State of Louisiana a lot of money in the prison system and court appearances due to their heroic efforts.

Congress, I'll Give You The Scissors! Cut Spending Please!