Often, the American mainstream media becomes a de facto government employee, taking the claims of U.S. officials and reporting them as proven fact — and nothing exemplifies this penchant better than reporting on the Gulf of Tonkin incident — perhaps one of most flagrant lies ever dreamed up as a justification for war.

On August 5, 1964, the New York Times reported: “President Johnson has ordered retaliatory action against gunboats and ‘certain supporting facilities in North Vietnam’ after renewed attacks against American destroyers in the Gulf of Tonkin.”

Additional outlets, such as the Washington Post, echoed this claim.

But it wasn’t true. At all. In fact, the Gulf of Tonkin incident, as it became known, turned out to be a fictitious creation courtesy of the government to escalate war in Vietnam — leading to the deaths of tens of thousands of U.S. troops and millions of Vietnamese, fomenting the largest anti-war movement in American history, and tarnishing the reputation of a nation once considered at least somewhat noble in the eyes of the world.

In 2010, more than 1,100 transcripts from the Vietnam era were released, proving Congress and officials raised serious doubts about the information fed to them by the Pentagon and White House. But while this internal grumbling took place, mainstream media dutifully reported official statements as if the veracity of the information couldn’t be disputed.

Tom Wells, author of the exhaustive exposé “The War Within: America’s Battle Over Vietnam,” explained the media egregiously erred in “almost exclusive reliance on U.S. government officials as sources of information” and “reluctance to question official pronouncements on ‘national security issues.’”

If due diligence had been performed, and reporters had raised appropriate doubts about the Gulf of Tonkin false flag, it’s arguable whether support for the contentious war would have lasted as long as it did.

And now, a very similar event has unfolded this week in which ships were allegedly attacked near the Strait of Hormuz and an “initial US assessment indicated Iran likely was behind the attack,” according to the Wall Street Journal.

Speaking to reporters on Monday, Trump said he’s “hearing little stories about Iran”—apparently referring to U.S. intelligence officials’ unsubstantiated claim that Iran was behind the alleged tanker attacks. Iran has denied any involvement.

As President Trump continues to surround himself with neocon warhawks, the drums are beating harder for war with Iran. The rhetoric is becoming so strong, that Trump himself — without provocation — began tweeting threats to the sovereign nation. The new tweets are quite to the contrary of his old ones. 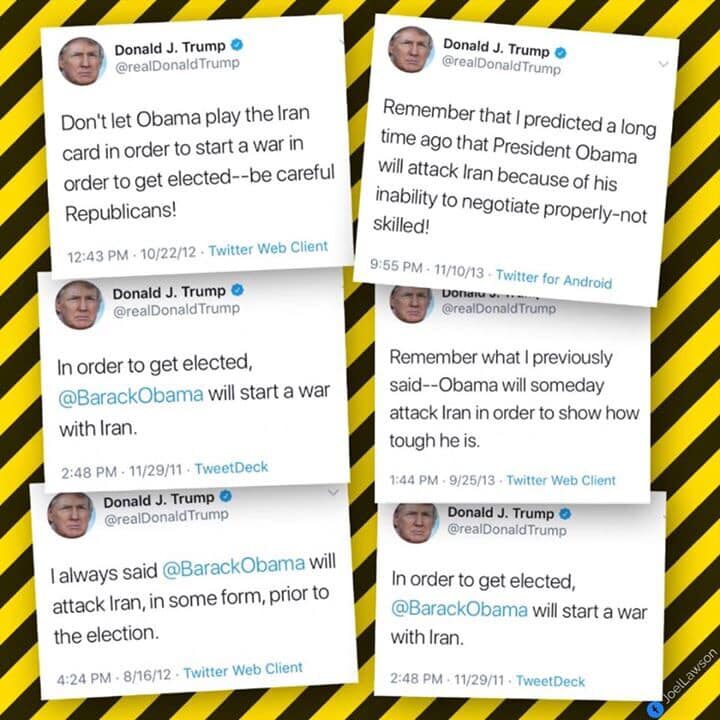 Sadly, the United States has a tendency to repeat the same mistakes over and over again which is why last July, a US Army Colonel predicted that another Gulf of Tonkin incident could bring us into war with Iran.

At the time, Fox News host Tucker Carlson and Colonel Douglas Macgregor addressed the growing prospect of US war with Iran and warned that a new “Gulf of Tonkin incident” could be used to drag us into it.

Carlson mocked the neocons’ claims that Iran is the “greatest threat” to America, explicitly noting that “virtually every attack in America has been inspired not by Iran, but by Iran’s Sunni enemies.”

Carlson pointed out how the neocons are hellbent on pushing the Trump administration into a new war. “If there was ever a swamp in Washington you are looking at it — the foreign policy establishment — they are working overtime to ensnare the president in a mess in Iran,” Carlson said. “Let’s hope that he understands exactly what’s going on.”

Pointing out Trump’s recent attempts at diplomacy with North Korea and Russia, Col. Macgregor weighed in, noting that he thinks Trump will attempt to avoid war with Iran. However, he noted that a false flag could be used to drag us into it.

“I think the president needs to watch carefully for the potential for something like the Gulf of Tonkin incident,” Col. Macgregor said. “Many of your viewers may not remember that it never happened and we could very well be treated to something like that in the Gulf. We should watch for that, and this is an example of President Trump’s comments on fake news, he should not be sabotage by fake news.”

Carlson then pointed out how the Trump admin has reacted to fake news by attacking Syria—twice.

For those who may be unaware, the plan to overthrow Iran has long been in the works. In fact, in April 2012, Pulitzer Prize-winning journalist, Seymour Hersh reported that the U.S. Joint Special Operations Command had trained (Mojahedin-e Khalq) MEK operatives at a secret site in Nevada from 2005 to 2009. MEK is the Iranian political-militant organization that advocates for the violent overthrow of the current Iranian regime. They are hardly quiet about it.

Coincidentally, MEK was classified as a terrorist organization by the United States and its allies—during this training period—until they suddenly removed them from the list in 2012.

While the current Iranian regime is certainly no bastion of freedom, the idea that US intervention or a violent revolution would be beneficial for the people of Iran is outright insane. To see what US intervention—through military support and the support of ‘protesters’—does to countries, one need only look at Syria, Iraq, Afghanistan, and Libya to see the horrific death tolls and war-ravaged dystopias left in America’s wake. Libya went from being a growing wealthy country to the hellish war-ravaged state that it is today in which humans are being openly bought and sold in public spaces.

To those paying attention over the years, Trump’s desire to intervene in Iran, and his subsequent support in the media should come as no surprise as it has been the plan since Bill Clinton was in office and was documented in the neoconservative PNAC report. This was even admitted by General Wesley Clark, former Supreme Allied Commander of NATO, that the U.S. planned on going to war with Iran, according to a 2001 memo from the U.S. Secretary of Defense.

“This is a memo that describes how we’re going to take out seven countries in five years,” Clark said. “Starting with Iraq, and then Syria, Lebanon, Libya, Somalia, Sudan, and finishing off with Iran.”

All presidents since Clinton have crossed countries off this list. Now it’s Trump’s turn.

REPORT: The Worst Examples Of Welfare Fraud And How To Fix Them

REPORT: The Worst Examples Of Welfare Fraud And How To Fix Them