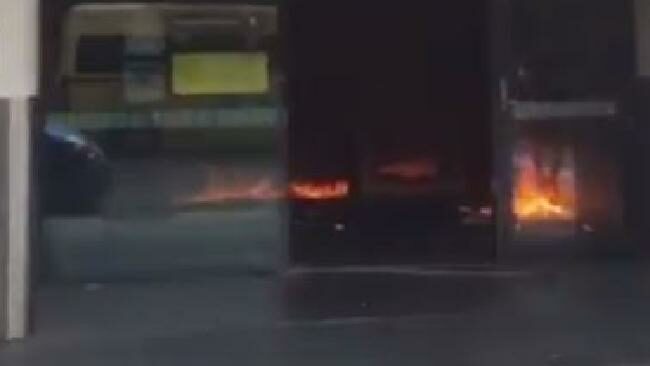 Witness Ashley Atkin-Fone said he ran into help after hearing a big explosion and seeing black smoke pouring out of the bank.

“This kid comes running out all burnt, screaming his head off … blood everywhere … I was shocked for a couple of the minutes,” he said.

“This worker come out the front out of nowhere, it’s packed with smoke, so I said get him, go around the back see if you can get the fire exit open and get stuff out the back.

“I got the fire out, I took four steps inside, I was shouting and shouting but I couldn’t hear anyone, the alarms were going off, no-one was hearing me, and then all of a sudden a few minutes later the police come, and the fire engines and everyone else.

Victoria Police Inspector Jacqui Poida said they responded to reports a man had set fire to the bank on Springvale Rd, Springvale, about 11:30am on Friday.

“He left the bank, police attended shortly after and assisted him, followed by ambulance who also attended to him at the rear of the bank.”

The Springvale man has since been taken to hospital in a serious condition and is under police guard.

Ambulance Victoria said they had treated 27 people, including six who suffered serious burns and were taken to the Alfred Hospital.

“We had to escalate to the highest level of our emergency response plan, it was significant,” Ambulance Victoria’s Andy Roughton said. 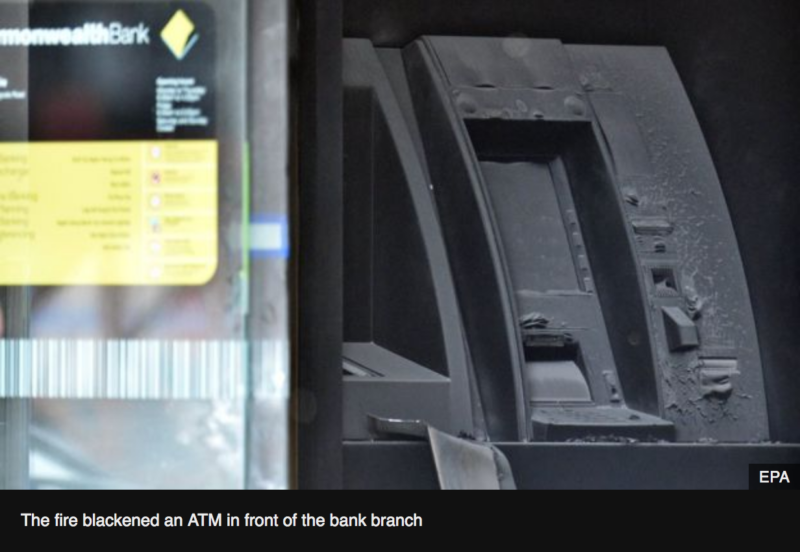 Three more are stable and the sixth is serious but stable.

Monash Medical Centre received 13 patients, including three children. All were in a satisfactory condition.

Dandenong Hospital treated 11 patients, with two requiring admission. Others were under observation in the emergency department.

‘ALL I COULD SEE WAS BLACK SMOKE’

Mr Atkin-Fone said he saw a man put what he believed to be a bomb at the front entrance.

“The blast went off at the front entrance, where the two ATMs are, he’s put the bomb in there, it’s gone off and a few people have got caught out — this one poor kid he was in a bad state,” he said.

A man is taken from the scene by paramedics. Picture: Seven News The scene outside the Commonwealth Bank branch soon after the attack. Picture: Seven News Authorities attend to victims of the bank fire. Picture: Seven News “He came running across here, he was bloody and everything else, there were two women … they got hit as well, and there was on bloke who kept walking up and down, his face was black.”

He said he did not see what caused the explosion.

“All I could see was all this black smoke, it was an absolute mess at the front of the shop, it was terrible, all the glass shattered, it wasn’t good,” Mr Atkin-Fone said.

The Country Fire Authority’s Paul Carrigg said a flammable liquid had been used to cause the fire, but they were not sure what it was.

“We understand that there’s been an explosion in the bank where numerous persons have been burnt as a result,” he said.

“To be honest, firefighters haven’t observed the container of fuel, but then again we haven’t gone in search for it, it is a crime scene.”

Victoria Police said they could not confirm whether there was an explosion before the fire.

“The information I’ve got is there was a male person that attended the Commonwealth Bank,” Inspector Poida said.

“He had some sort of accelerant with him. A container, not sure what he had. And somehow that accelerant was used inside the bank.”

Mr Carrigg praised people on the scene who came to the aid of the victims.

He said it was amazing and lucky no–one had lost their lives.

“It was a combined effort I think by civilians, witnesses who were in attendance, and the emergency services response [was] fantastic,” he said.

“They were fantastic from my view, provided water for the victims.”

‘IT HAPPENED SO QUICK’

Hundreds of people gathered along the street as cries could be heard and smoke filtered out of the building.

Springvale Road, a busy shopping strip 23 kilometres from the CBD has been closed and is now lined with emergency service personnel.

Onlooker Eric Fleuiot said he was still in shock after witnessing the incident.

“As I come from the train station, I heard a fire truck, then I saw two police cars turning up, barricades went up … it happened so quick,” he said.

“One guy had both hands burnt, and was screaming and the paramedics and fire brigade were there.

“I just can’t believe this has happened in Springvale.”

The Commonwealth Bank closed the branch while they respond to the situation.

“Our first priority is the safety of our staff and customers and as a result the branch will remain closed for the rest of the day,” the bank said in a statement.

“Our response team is on site, and we are working closely with local authorities and emergency services.”

Clinton “Fixer”: “Nothing I have heard [about Donald Trump] comes close to the sexual and moral corruption of the Clintons”