As Media Hypes Trump-Kim Summit, The Real Rulers of the World are Secretly Meeting at Bilderberg

The world’s ruling elite will meet in secret this week. No press will be allowed in, no one will be interviewed about it, and Bilderberg will barely register as a blip within the mainstream media’s radar. As the media hypes the mostly symbolic meeting between Donald Trump and Kim Jong Un, bankers, politicians, military leaders, and information controllers will be discussing their plans for the world behind closed doors and with zero transparency.

The 66th annual Bilderberg Meeting, which has been held in locations around the world throughout the years, kicks off on Thursday in in Turin, Italy and is set to end on Sunday. Despite a prestigious guest list of around 130 attendees — who will arguably have more of a global influence than any elected officials — the meeting will escape any scrutiny in the mainstream media.

The reason this meeting of the global elite manages to remain free from any mainstream media coverage is no accident. This group of elite power brokers owns the media, they own the politicians, and, arguably, they own the world.

In attendance to this year’s meeting are war criminals like Henry Kissinger, who will discuss matters ranging from Russia to Free Trade to the “post truth” world. Below is the list of twelve topics up for discussion at the meeting.

Nothing highlights the insidious nature of such an event quite like having Kissinger—who can’t even travel to certain countries without being arrested for war crimes—on the same list of attendees with US politicians and members of the mainstream media. And all of it is happening in secret.

In a book titled ‘Henry Kissinger, Hillary Clinton’s Tutor in War and Peace,’ Greg Grandin lays out just how corrupt this friend of Donald Trump and Hillary Clinton actually is:

“Let’s consider some of Kissinger’s achievements during his tenure as Richard Nixon’s top foreign policy–maker. He (1) prolonged the Vietnam War for five pointless years; (2) illegally bombed Cambodia and Laos; (3) goaded Nixon to wiretap staffers and journalists; (4) bore responsibility for three genocides in Cambodia, East Timor, and Bangladesh; (5) urged Nixon to go after Daniel Ellsberg for having released the Pentagon Papers, which set off a chain of events that brought down the Nixon White House; (6) pumped up Pakistan’s ISI, and encouraged it to use political Islam to destabilize Afghanistan; (7) began the U.S.’s arms-for-petrodollars dependency with Saudi Arabia and pre-revolutionary Iran; (8) accelerated needless civil wars in southern Africa that, in the name of supporting white supremacy, left millions dead; (9) supported coups and death squads throughout Latin America; and (10) ingratiated himself with the first-generation neocons, such as Dick Cheney and Paul Wolfowitz, who would take American militarism to its next calamitous level.”

As the Telegraph points out, Bilderberg invites figures from politics, industry, finance, academia and the media. Two thirds of the invitees are from Europe, with the rest from North America; a third of the people on the guest list work in politics and government. This year, 131 participants from 23 countries have confirmed their attendance so far.

In what some call a violation of the United States Logan Act, the governor of Colorado, John Hickenlooper will be in attendance. His invite is likely strategic as he is already rumored to run for president in 2020.

Indeed, former presidents George H.W. Bush and Bill Clinton both attended Bilderberg conferences in the years before being elected to the Oval Office. Tony Blair was on hand at the 1993 Bilderberg meeting before becoming prime minister of England in 1997, and Emmanuel Macron, the President of France attended in 2014 just prior to being elected.

What’s more, the 2008 conference is believed to be the catalyst for that year’s US presidential election: rumors suggest that attendees settling on backing Barack Obama for the Democratic Party nomination at that year’s event, only for contender Hillary Clinton to bow out two days later.

Bilderberg attendees must abide by Chatham House Rules, meaning that while participants can use the information received, they are barred from talking about any individual who may have steered their decisions.

Numerous bloggers and activists have suggested that, based just on what is known already from public statements, simply attending a Bilderberg meeting should constitute sufficient grounds for immediate arrest and investigation of Americans.

In 2011, then-Congressman Ron Paul called for an investigation and noted that U.S. officials participating in the yearly gathering — specifically Texas Gov. Rick Perry at the time — were quite possibly breaking the law. “This information about him going over there and violating the Logan Act and getting involved, I’m just impressed that that’s in the ordinary media — I think that’s encouraging, too,” Paul said during an interview at the time, noting that Gov. Perry’s attendance was “a sign that he’s involved in the international conspiracy.”

To illustrate the scope of the group’s reach, Business Insider published a chart, showing all their ominous connections. 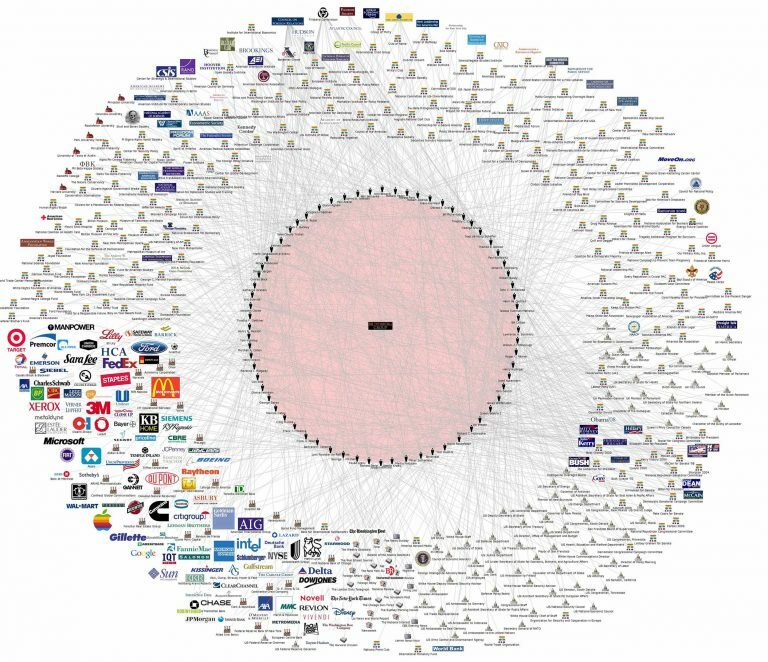 But fret not free world, Donald Trump is meeting with Kim Jong Un.

In what can be referred to as his most telling three minutes ever, George Carlin laid out this entire scenario quite clearly in his 2005 skit titled, Life is Worth Losing, in which he points out that “it’s a big club, and you ain’t in it.”

Czech President: We Do Not Want Muslims Because They Refuse To Integrate

Pennsylvania: Thousands Of Voters In One County Claim To Not Have Received Their Ballots

Pennsylvania: Thousands Of Voters In One County Claim To Not Have Received Their Ballots