Attacks on Christians in America Grow as Islam Gets Special Protection

According to information released at a May 9, 2013 press conference by the families of Navy SEALs killed in an August 2011 helicopter shoot-down in Afghanistan, “military brass prohibited any mention of a Judeo-Christian God” and “invited a Muslim cleric to the funeral for the fallen Navy SEAL Team VI heroes who disparaged in Arabic the memory of these servicemen by damning them as infidels to Allah.”

The accusations arose over a “ramp ceremony” held at Bagram Airfield in Afghanistan as flag-draped caskets of the dead soldiers were loaded onto a plane for transport back to the United States.  The shocking words of the Muslim cleric, revealed in later translations, were spoken at a memorial service meant to honor those who made the ultimate sacrifice for their country.  They were yet another example of the abject disrespect of Christians and Christianity endemic to the Muslim world. 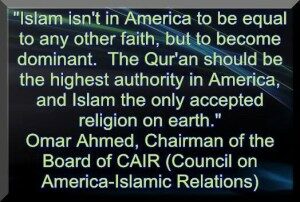 Here at home, Christianity and Christian religious practices are also under attack, but in more subtle ways and under a misinterpretation of the principle of freedom of religion.  In the United States, that legal doctrine is cited to marginalize Christian prayer and traditions, while, at the same time, dramatically accommodating and even expanding Muslim religious practices.  Myriad examples exist.

During the recent government shutdown, Catholic priests were warned that they could be arrested for celebrating Mass, even if performed on a voluntary basis.  Under Secretary of Defense Chuck Hagel’s direction and determination was that priests do not “contribute to the morale” and “well-being” of military personnel.”  Thus, offering of the sacraments was prohibited and the Eucharist placed under lock and key.  Curiously, no mention was made of curtailing religious freedom for Muslim service members or furloughing imams.

This prohibition against Christian religious practice is not limited to the military.  Police throughout the land also frequently come down hard against Christians.  In 2010, a group of students from the Arizona-based Wickenburg Christian Academy were ordered by a police officer to cease their quiet prayers on the steps of the Supreme Court in Washington, D.C.  The officer cited a statute that prohibits demonstrations on the steps, but no official policy bars prayer at that location.

In June of 2010, David Wood and two other Christian missionaries were arrested by Dearborn, Michigan, police at the annual Arab festival for discussing Christianity on a public sidewalk outside the event. The men, who have since been acquitted, were charged with disturbing the peace and spent the night in jail.

Contrast these incidents with a massive public display of praying Muslims during the annual Muslim Day Parade in New York City. Muslims, who are protected each year during the event by Muslim NYPD officers, are free to engage in mass prayer, even prostrating themselves on the streets of midtown Manhattan. Vehicular traffic halts and participants freely harass non-Muslims who attempt to pass through the area on foot.

Meanwhile, the ACLU has been at the forefront of an extensive effort to ban Christian prayer from public schools under the “separation of church and state” provision of the First Amendment.  This is a signature issue for the “civil rights” organization.  However, for Muslim prayers, the organization reverses its interpretation and fights for student rights to engage in prayer.

For example, when Carver Elementary School in San Diego instituted a 15-minute prayer period during class time for Muslim students in 2004, the ACLU endorsed the practice.  ACLU spokesman Kevin Keenan said the group supported Muslim prayer under the First Amendment’s prohibition against impeding religion.  In this way, the ACLU was “honoring constitutional standards for freedom of religion.”

Again in 2010, the ACLU mustered only mild to nonexistent concern when 6th-graders from a Wellesley, Massachusetts’s middle school took a field trip to a local mosque at the Islamic Society of Boston Cultural Center and engaged in prayer.  Parents were told that students would learn about the architecture of the building and observe a midday prayer service.  But once at the mosque — which is associated with the Muslim Brotherhood, known supporters of Islamic terrorism — students were told by a mosque official that “Allah is the only G-d” and taught how to recite the midday prayer.  After being encouraged to join the Muslim men, some of the boys prostrated themselves to Allah.

Meanwhile, in Michigan, Dearborn public schools have a policy of accommodating Muslim prayers at school during school hours, as well as ignoring unexcused absences for Muslims to leave school early for Friday prayers.  Yet, in 2009, after a Muslim organization complained about permission slips given to Christian students to attend off-site afterschool Bible study, issuance of the slips was discontinued.

In addition to police, the ACLU, and schools, U.S. courts have also sided with the Islamic religion and against Christianity.  In 2001, the Byron Union School District in Byron, California instituted a three-week unit on Islam for 7th-graders.  Students took Muslim names, recited Islamic prayers, and celebrated Ramadan.  When parents sued the school on the grounds that the course was “officially endorsing a religion,” the U.S. Supreme Court rejected their appeal, leaving intact an earlier ruling by the Ninth U.S. Circuit Court of Appeals that deemed that the unit did not violate the Constitution and had an “instructional purpose.”

In 2009, the same court of appeals upheld a ban by Henry Jackson High School officials in Everett, Washington against an instrumental performance of Ave Maria at a 2006 commencement ceremony.  A student futilely challenged the school’s determination that the song was “an obvious religious piece” at a graduation that should be “strictly secular.”

Government entities also bear down on the Christian religion.  After allowing baptisms in Sinking Creek in the Ozarks for an almost uninterrupted 50-year span, the National Park Service in August notified Gladden Baptist Church in Salem, Missouri that permits would now be required in advance of baptism ceremonies in the waterway.  The requirement was later rescinded in response to the intervention of local Congressman Jason Smith.

And this month, in Ovid, Colorado, the director of a city-owned cemetery initially refused to inscribe the Ichthus or “Jesus fish” on the tombstone of a local preacher’s wife on the grounds that some people might be offended.  Despite the fact that the cemetery is filled with headstones inscribed with religious symbols and Biblical verses, city officials refused to come to the family’s aid.  The cemetery director defended his position with a logic-defying hypothetical: “What if someone wanted to put a swastika?” — Thereby disrespectfully equating a representation of Christ with a symbol associated with Nazi Germany.  The city reversed itself only after public outcry and media attention.

The instances listed above make it readily apparent that the First Amendment is often conveniently misinterpreted to buttress the assault on the Christian religion and its expression, practice, and traditions.  In this way, Christianity is being insidiously expunged from public life using false legal pretenses.  The legitimate interpretation of the provisions of the First Amendment, which include prohibitions against government interference in public religious expression and the establishment of a national religion, has been twisted to prohibit Christian prayer in public places and schools.  This is a false reading of “separation of church and state.”

Yet, as the instances listed above and many others illustrate, this interpretation doesn’t apply to “mosque and state.”  Freedom of religion has come to mean no freedom for the practice of Christianity but ample freedom to practice Islam.  If the war on Christianity in America isn’t halted soon, Barack Obama’s statement that “[w]hatever we once were, we are no longer a Christian nation,” will certainly become a reality.