Barack Hussein Obama: I Am Barry Soetoro, But I’ve Never Used Another Alias

Barack Hussein Obama Soetoro Sobarkah is an enigma for sure, and the evidence of his birth certificate being a fraud is overwhelming. However, recall that this usurper of the People’s White House was caught on video not only claiming to be Barry Soetoro, but also claiming that he had never used any other aliases.

First, take a look at this video of Obama speaking at Cambridge Public Library on September 20, 1995, as he promoted a book with his name on it, Dreams From My Father, which was written by domestic terrorist Bill Ayers.

As Obama speaks, he tells the audience that his family referred to him as Barry, not Barack. So, what or who is Barack Hussein Obama?

When Obama was sworn in as an Illinois attorney, he claimed that he had no full former names. 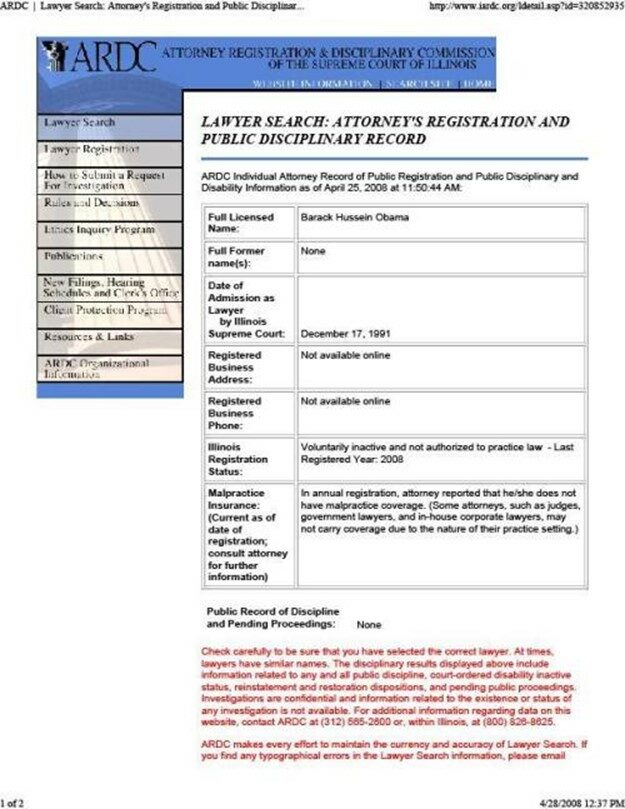 It’s interesting that Barry Soetoro was how Barack Obama was known in high school and portrayed himself as a foreigner, according to a classmate.

In 2013, it was discovered that Barry Soetoro was registered to vote in Washington, DC, but Barack Obama was not. Just days after that discovery, Barry Soetoro disappeared from the DC Voter Registration site. When a Freedom of Information Act request was filed concerning the matter, it was denied.

Not only should Congress be dealing seriously with the evidence that Joe Arpaio is going to present to it, but the State of Illinois should be taking serious steps to bring this fraud to justice for perjury. They could do so simply by applying the law as written.

Rules of the Board of Admissions and Committee on Character and Fitness
RULE 6   CHARACTER AND FITNESS REQUIREMENTS
“Rule 6.4. The revelation or discovery of any of the following should be treated as cause for further detailed inquiry before the Committee decides whether the law student registrant or applicant possesses the requisite character and fitness to practice law: (a) unlawful conduct; (b) academic misconduct; (c) making false statements, including omissions;

(d) misconduct in employment; (e) acts involving dishonesty, fraud, deceit or misrepresentation; (f) abuse of legal process; (g) neglect of financial responsibilities; (h) neglect of professional obligations; (i) violation of an order of a court; (j) evidence of conduct indicating instability or impaired judgment; (k) denial of admission to the bar in another jurisdiction on character and fitness grounds; (l) disciplinary action by a lawyer disciplinary agency or other professional disciplinary agency of any jurisdiction; (m) acts constituting the unauthorized practice of law; (n) failure to comply with the continuing duty of full disclosure to the Board and the Committee subsequent to the date of registration or application.”

Just because some people are happy he will be leaving office in January does not mean he should not be held accountable for his crimes.

Muslim Offers $10,000 If You Can Show Where in the Quran it Commands Terror – Where Can We Pick Up the Check?