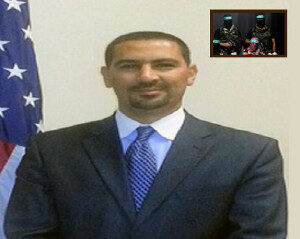 Granted, there are many that could claim that our Founders, at least many of them were of the Masonic persuasion, rather than specifically Christian (For more on this, I recommend Dr. Gary North’s Conspiracy in Philadelphia, which you can download for free by clicking here), but that does not take away from the Christian, not Islamic, heritage of America.

Mohamed Elibiary is described as:

Mohamed Elibiary is the founder of Lone Star Intelligence, LLC.  He has advised numerous federal, state and local law enforcement organizations on homeland security-related matters.  In 2009 he was acknowledged in a Congressional Research Service report for advising the Information Sharing Environment Program Management Office on the Nationwide Suspicious Activity Reporting Initiative.  In 2010 he testified before Congress on “Working with Communities to Disrupt Terror Plots.”  In 2011 he was awarded the Louis E. Peters Memorial Award, the FBI’s highest public service award for “his extraordinary contributions to specific cases in support of the FBI’s counterterrorism mission.”  In 2012 the Office of the Federal Public Defender, a division of the U.S. Court, recognized Mohamed for his “tremendous service” leveraging his Homegrown Violent Extremism expertise in the United States vs. Daniel Patrick Boyd counter-terrorism case.

I was unable for some reason to embed Elibiary’s tweet, or mine for that matter (You can access my Twitter, as well as Elibiary’s by clicking the blue links. So here is a screenshot: 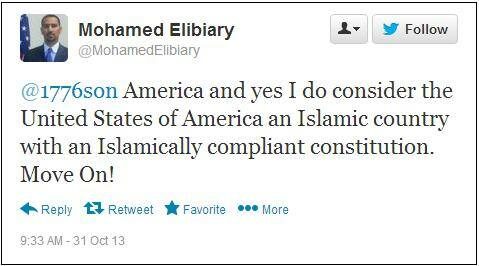 I called him out on engaging in taqiyya, just as Janna Brock did on his support of the Muslim Brotherhood, which led to his removing the R4BIA from his Twitter account. Elibiary is a coward and demonstrated that by removing the symbol from his Twitter account because of pressure. I will not back away from my claims that he is an Islamist and all those of the Muslim Brotherhood are as well. They have over a 1,400 year track record, following in the footsteps of their non-prophet Mohammed, the murdering, thieving pedophile.

I told Elibiary he was engaging in taqiyya, and he knew it. I also pointed out that I have addressed the true founding of this country with the Mayflower Compact, which he had no explanation for. Facts are stubborn things.

Elibiary, like all Islamists, promote the teachings of a pedophile, and I pointed that out. Mohamed Elibiary, along with Barack Obama, all members of the Mulism Brotherhood and those who espouse Islam in our government, should be tried as traitors and when found guilty of treason, executed under the law.

Is my desire that they be executed? No. My desire is that they would come to the knowledge of the Lord Jesus Christ and that they would repent, but seeing that they are more concerned with advancing their caliphate and not the best interests of the United States, then I see no alternative for them. This man certainly does not belong in a position in which he advises on Homeland Security.

In fact, notice his tweet. He says that the law of the land is an “Islamically compliant constitution.”

Really? Then pray tell Mohamed, who is the Lord mentioned in the “Year of our Lord” at the end of the Constitution? Is it Allah? Is it Mohammed? No, it’s the risen Son of God, the Lord Jesus Christ. He is our Lord, but you refer to him as only a prophet, and a bastard child at that! Your prophet is dead and your god, Allah, is a perversion of the true and living God.

Additionally, if our constitution is Islamically compliant, then why is your boss’ federal attorney threatening people with prosecution and imprisonment for pointing out the truth about Islam, something they clearly do not have authority to do under the First Amendment of the very constitution you are claiming as your own? Furthermore, why aren’t you calling out people like Bill Killian who is intimidating Americans with regard to Freedom of Speech? It really isn’t too Islamic compliant, is it?

In fact, Elibiary’s claims strike me as such outright lying, that I am compelled to challenge him. Mr. Elibiary, I challenge you to debate, very open and public to demonstrate your claims that the United States is Islamic and her Constitution is Islamic compliant. I challenge you anywhere, anytime to put your money where your mouth is and let’s see who really knows their history. Let’s see who is speaking for their lying prophet and who is willing to engage in an honest view of America’s history. (This challenge has been tweeted to Mr. Elibiary. We’ll see if he will play the man and respond.)

Our founding fathers fought Mohammedans like you and your boss. Our veterans have fought communist sympathizers and Marxists in both World Wars and Vietnam, like those in the Obama administration. I challenge you sir to an open debate. If you are not willing to deal with it openly and in a public forum where we can speak, then perhaps you might want to engage here on Freedom Outpost. Either way, I challenge you to man up! Stop hiding behind your Twitter account and provide the evidence to back up your claims. Until then, you are nothing more than a mouthpiece for a fascist “religion” that is founded on the teachings of a demon possessed pedophile.

UPDATE: Finally got the embeds to work today. Here was the conversation:

@1776son America and yes I do consider the United States of America an Islamic country with an Islamically compliant constitution. Move On!

Here are my responses. My apologies for the typos, as I was a bit ticked off in responding.

@MohamedElibiary @1776son Let me tell you something Elibiary, you know nothing of America. You’re engaging in Taqiyy and you damn well know

@MohamedElibiary @1776son You have yet to refute my claims regarding the Mayflower Compact. You promote the pedophile’s teachings

@MohamedElibiary @1776son you promote the caliphate, not America………..

@MohamedElibiary @1776son Let me just say it openly…..YOU ALONG WITH BARACK OBAMA AND THE MUSLIM BROTHER HOOD ARE DOMESTIC TERRORISTS

@MohamedElibiary @1776son Mohamed Elibiary, you are commanded by God to repent of your idolatry and believe the gospel of Jesus Christ…..

@MohamedElibiary @1776son the one you and your religion claim is a bastard child…..if you will not do this and seek to force Islam on US..

@MohamedElibiary @1776son You will will be met with such a force of DEFENSE that you will not be able to withstand it.

He then attempts to claim we are a Constitutional Democracy….(rolls my eyes)

@MohamedElibiary @thoughtflblonde Why don’t you learn what America is….It’s not a const democ. It’s a Constitutional Republic!