If there is one thing that I have become completely fascinated with over the past few years it is the psychology involved in instilling a despotic, tyrannical government. I have tried to paint a picture of exactly how it is implemented in the university setting the best I could and I think this is why it captured my attention so much because I witnessed it firsthand. Not only through concepts like white privilege but in actual psychology classes as well. I took one called Positive Psychology and folks; it was one of the scariest things I think I could have experienced. This is where I learned all about moral relativism in a book I was forced to read called the Happiness Hypothesis. The concept of moral relativism was explained by describing the morality of incest or child sexual abuse as only being constructs in the mind and because there is no absolute right or wrong in the universe, according to this author anyway, child sexual abuse and incest were wrong simply because we had deemed them so. Another idea that was discussed at length in this class was the development of a happiness scale that they intend to impose on society. Can you imagine that? No longer are we in a country where we have a right to pursue what makes us happy, we will be told by psychiatrists, psychologists, and my favorite; social workers whether we are happy or not. It really is fascinating to watch the young people eat this stuff up, and if even if they don’t buy it they are certainly conditioned during their K-12 education not to question authority and believe that there is no place for their opinion among the academic elite.

One thing I am thankful for is that the college experience forced me to study and expose myself to things I would not have otherwise. The more I saw the words, Marx, feminism and collective pop up on the big screen projector the more time I spent investigating what they were and I am glad I did. Let’s not forget that I was a conspiracy theorist anyway, (Cass Sunstein didn’t hear me say that did he?) Learning about Marx and the history of communism has been very rewarding for me insofar as understanding the politics of the day. What left me very frustrated was the fact that people in class never even cared to question why they were being taught Karl Marx or Saul Alinsky. The reason being of course is that they have been inundated with a social justice education since kindergarten. They generally have no idea that we are a constitutional republic because they already believe we should be socialist. 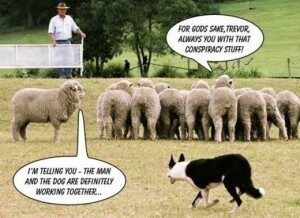 One of the most intriguing things, in my opinion of course, about Marxism and socialism is something called the Hegelian Dialectic. I have written about it before but just as a reminder it is a way of tricking the masses into accepting the socialists’ solutions to problems. This is mainly because they are the ones creating the problems and then offering the solutions. I think it would be safe to say that today’s circus show masquerading as the Democrat and Republican Parties is an excellent description of the Hegelian Dialectic at work. They pretend to be opposing forces, but are really working toward the same goals of increased government control and the subjugation of the American people. 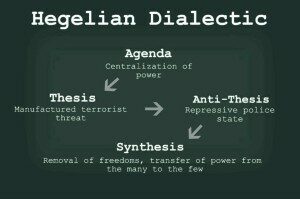 When I first became interested in these subjects it was immediately after the September 11th attacks of 2001. This is when I became aware of the New World Order conspiracy, which everyone understands is the desired outcome. At the time I believed that George W. Bush had a job and that job was to bring discredit to America through the unwanted wars, the Patriot Act and the financial crisis that hit at the end of his terms as president. Remember, I am looking at things through the lens of the Hegelian Dialectic. Create the problem and then offer the solution. People were so fed up with George Bush and the Republicans, an Obama victory was a certainty, especially when you take into consideration the abysmal performance, which incidentally had to be orchestrated, of John McCain. It was all a dog and pony show to give the illusion that we have fair and balanced elections.

Five years into an Obama presidency, many American patriots are of the understanding that Obama represents a radical Alinsky-style organizer whose skills at creating hate and discontent for the purpose of obtaining power are unmatched. Most Americans understand, or believe that he is deliberately destroying the country in order to usher in the New World Order. The thing is, I am beginning to see a different tactic here, along the same lines no less, but yet a different end goal than what I would have earlier believed. Let me explain. America has already been discredited enough to secure a voting base ignorant and radical enough to continue to vote for Obama. I heard commentators on the radio referring to events of today as the first Anti-American revolution in history. With this being said I think Obama is actually trying to discredit America not on a national stage but an international one. Let me give you some examples.

There was headline the other day on Michael Savage’s website describing the recent deaths of a police chief in Mexico from a gun involved in the Fast and Furious scandal. While we believe this is an attempt to destroy our second amendment, which it is, it is also being used to discredit America in the eyes of other nations and get them to demand action against the gun smuggling of the U.S. If you need me to elaborate further on the subject, what was the core issue behind the Benghazi scandal? Gun smuggling. These are incidents in which countries around the world will see a need to have something such as the U.N. Small Arms Treaty imposed and enforced. Also, the manner in which Obama is carrying out the directives of his puppet master to continue with wars planned in the Project New American Century and his unmanned drone program killing innocent children every day, he is giving the world the impression that we are in fact an imperial nation hell bent on waging war. Another point to make is one of religion. While Christianity is being thoroughly discredited and mocked, we still have the issue of Islam and their Jihad against the West. Communism has no God, so is our government’s support for Islam only a show and is the real agenda to allow Islamic terrorism to continue in order to further discredit religion? Painting the world’s religions as extreme in nature by applying a morally relative, pragmatic association between Islam and the “Christian right” would lay the pretext for doing so.

One of the 45 goals of the communists, as I have mentioned before, is to discredit America and give credit to communist countries. With Obama acting like a despotic tyrant at home and waging war abroad, are the deceived youth of the world looking to the lies of communism to be their savior? As the police state continues unabated in the U.S. will the communist Chinese, or the Russians actually step in to give the impression they are there to be the world’s saviors? I may be over theorizing a bit; however, this is what the Hegelian dialectic is designed to do, achieve the communist goals through deception. After thoroughly reviewing Marxism, the forty five goals of the communist party, Alinsky and the Hegelian Dialectic, I think the idea of Obama destroying America’s image on a world stage to give credit to the communists is exactly what is going on today.