Barack Obama's Uncle: "We Are All Muslim" (Caught on Video)

We obtained several videos from Middle Eastern sources. In one, President Obama’s uncle Sayid, about whom we’ve reported in the past, about his dealings in Saudi Arabia being in bed with Wahhabist madrassas. Here he was assuring the Middle East in this rare interview that the whole Obama family are “all Muslim”, everyone.

We assembled the following clip (unedited versions are linked to below) never before reported in Western circles until now. Of course, no one in the U.S. media wants to even address the sensitive issue of President Obama’s Islamist connections; it’s a taboo:

Aside from the President’s terrorism-connected brother Malik Obama, how many Americans know Malik acts somewhat like an ambassador himself while using President Obama’s name every time he visits a foreign country. In Egypt, President Obama’s popularity is nil among secular Muslims who openly believe that President Obama is an Islamist while in the West, even supposedly well-intended organizations that expose the Muslim Brotherhood agenda often twist themselves into pretzels to avoid the plain truth, that the Obamas (as they themselves declare) are indeed all Muslim and support Islamist interests. Consider the ‘reasoned’ Global Muslim Brotherhood Watch (GMBW) website. This site reported on Malik Obama’s connections to the IDO and concluded that nothing could be proven that links him to the Sudan branch of IDO (GMBW isn’t swayed by photos on Malik’s website, nor do interviews Malik granted [1] [2] [3] [4] [5] [6] [7])

Apparently, GMBW don’t want to examine the sources in Arabic, and they conclude that Malik was likely welcomed into the group based on the prestige of his name.

Of course, missing from GMBW’s analysis are the several Obama family members who are connected to terrorism, as well as our recent revelations, which include Malik prominently wearing a scarf in Yemen that calls for the elimination of Israel, that including all the website links to Hamas front organizations.

What is also missing are all the world tours by ambassador Malik, representing the family. These visits include supposed peacekeeping in Sudan, the Balkans, Turkey and the Middle East, all while he carries out simultaneously with President Obama what seems to be an evident Islamist agenda. According to Musa Obama, the communications between Barack and his family are funneled through one conduit – uncle Saeed Obama.

In fact, Malik’s international excursions are about more than prestige. He’s like an ambassador who uses his brother’s name wherever he goes. Muslim Sudanese politician Abdullah Deng Nial, who acts as Trustee for the Secretariat of Muslim Waqf in the Islamic Supreme Council, is currently the Deputy Secretary-General for Hassan al-Turabi, a Sudanese Muslim terrorist who was close to both World Trade Center masterminds – The ‘Blind Sheikh’ and Osama bin Laden. 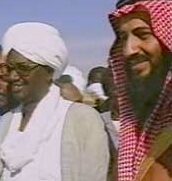 Here is Nial, proudly revealing what Malik does in Sudan, via Meshkat (translated):

“The Islamic Council in the south supports the government in Khartoum, as well as the southern government, which paid the Council two billion pounds in support of the programs of incorporation. The General Conference to recognize the establishment of the Muslim Council was held in the southern capital of Juba and included Muslims from the ten states of the South. It was attended by the Mufti of Rwanda, the Mufti of Uganda, the Mufti of Kenya and the Mufti of Tanzania and the brother of U.S. President, Malik Obama as well as guests from the Gulf countries and some Arab and African countries. We called it the Islamic Council, in line with the Islamic councils located in neighboring countries. It was done in order to establish a large block for the Muslims in the region [South Sudan]. Now Muslims in the south have an entity and an official representation. It is the only body recognized by the Government of the South.”

Malik works diligently to establish an Islamist representation in the Christian South Sudan, advancing the interests of his bosses Suar al-Dhahab and Omar Al-Bashir. Does the GMBW even know what they are talking about?

How could the “Christian” President Obama at one point in time prevent Salva Kiir, the Christian president of South Sudan, from aiding rebels who wanted to topple Malik’s boss, al-Bashir to replace his Islamist government with a secular government? Andrew S. Natsios of Foreign Affairs elaborates:

And who stopped him? The “Christian” President Obama. He attacked the Christian leader. Natsios concluded:

Malik could still keep his job, which includes protecting the world’s leading genocidal maniac Omar Al-Bashir. Hollywood actor George Clooney has made bringing Al-Bashir to justice his cause celebre. Yet, he is one of Barack Obama’s biggest fundraisers. His silence on the Obama family’s relationship with Al-Bashir is (and has been) deafening.

More examples (out of many) can be provided regarding Malik’s ambassadorship. In August of last year, the secret ‘Obama Ambassador’ Malik visited Turkey during his ‘Balkan peace tour’, which began in Skopje, Macedonia, the birthplace of Mother Teresa. While there, his so-called ‘peace deals’ were even rewarded and Malik was presented with the Balkan Charter of Peace award from the Balkan Club of Peace.

Yet, in an interview with the U.K. Daily Mail, Malik was adamant that he does not use the family name to elevate himself:

He (Malik) is fed up with people criticizing him for trying to cash in on his younger half-brother’s famous name. “It’s also my name and my birthright. Let’s not forget that I was born before him,” he says.

That is simply not true. In endless interviews and speeches, Malik always introduces himself as the President’s brother. During his tour, which included stops in several cities, Malik proceeded on to visit the city of Gostivar in Macedonia, where he was welcomed by Mayor Nevzat Bayt, the Mufti and even speaks a former commander of the ‘extremist’ Albanian NLA Talat Xhaferi, also known as Commander Forina (Komandant Forina).

Malik Obama in Gostivar with Mayor (not cashing in on his brother’s name).

As for the people in attendance during Malik’s visit, Gostivar.org quotes the Mayor as saying the following, which includes the typical buzzwords used by false Islamist purveyors of peace (translated):

“Gostivar welcomes Malik Obama, the brother of the President of the United States… The people here of peace, tolerance and understanding can be trusted to convey your message throughout Macedonia. Gostivar is… made up of people with a tolerance and understanding that is unmatched… They live in harmony among themselves. People of our city make up a mosaic of different ethnic groups and religions. This is an important asset that we should preserve.”

If living in harmony is the standard, Macedonia appears to have failed to meet it when selecting its Defense Minister.

Xhaferi was appointed to his Minister of Defense post in February of 2013. It was not without controversy – and even riots. According to a detailed report by Tom Vangelovski, the NLA:

“…instigated an armed attack against the Macedonian state in 2001…”

Xhaferi is apparently also a deserter:

“When the 2001 war began, Xhaferi, like many other Albanian police and military personnel, deserted the army and joined the NLA.”

The Islamist NLA claimed to fight for more rights for the Muslim Albanian minority. In 2008, Xhaferi was charged with obstructing a policeman. The former NLA commander also has a history of creating chaos within the political system. His resume smacks of a Macedonian version of Bill Ayers.

Malik meets the Mufti in Gostivar.

Here is the Mayor presenting Malik with another award (don’t worry, it has nothing to do with Malik’s family name):

After a quick perusal of the other photos posted on the Gostivar.org site, it’s easy to see that Malik Obama is the main attraction and was treated like an emissary of President Obama himself.

Of all the stops Malik made along his tour, Turkey should have been the most high-profile. It wasn’t. In fact, it’s only mentioned as a place he would be visiting. Details of the visit are very difficult to find.

At the time of Malik’s visit to Turkey, Dr. Ekmeleddin Ihsanoglu, a Turk, was the Secretary General of the Organization of Islamic Cooperation (OIC), which is headquartered in Jeddah, Saudi Arabia. Malik has been there too. In fact, he met with then OIC Secretary General Ihsanoglu in 2011.

2011: Malik Obama with the Secretary General of OIC in Jeddah, Saudi Arabia in 2011.

As we’ve reported before, in his capacity as Executive Director for the IDO, Malik Obama works for an organization overseen by Sudan’s Omar al-Bashir. As such, while Secretary General for the OIC, Ihsanoglu once prayed with al-Bashir, the overseer of Malik Obama’s IDO, who is wanted for crimes against humanity.

That’s understandable. It’s quite difficult to refute this photo:

Speaking of ambassadors, it became news recently that so many of Obama’s ambassadors are donors to his campaign and don’t meet basic qualifications for the job. The newly announced Ambassador to Argentina – Noah Byson Mamet – admitted during his Senate hearing that he’d never even been to that country; State Department spokesman Jen Psaki couldn’t even confirm that he speaks Spanish. ABC’s Jonathan Karl frustratingly asked State Department spokesman Jen Psaki:

“How much does it cost to become an ambassador… in the Obama administration?”

Here is another video of Musa speaking in Arabic at the “Al-Salamu A’lyaykum” project. At the :55 mark, he says:

“This project is considered an Islamic Da’wa.”

Here is a video that profiles Barack Obama’s grandmother Sarah:

Ben Barrack contributed to this article.