Harney County Sheriff David Ward became the first witness against to testify against Ammon Bundy and his brother Ryan, along with five other protesters in the occupation of the Malheur Wildlife Reserve. However, his comments reflect a lack of respect for the rights of other people, which our Constitution is supposed to protect.

While he testified that the occupation was not violent, he did claim that it was far from peaceful.

“Certainly it’s not normal to have a hundred people walking around with firearms on our streets,” Ward said.

One has to ask why that is. Wasn’t it normal in the days of our founders? It most certainly was, and it was normal for the tyrants of the day to view that as abnormal and a threat, just like Sheriff Ward. The right to keep and bear arms and to protest government if a fundamental right in a free society. It was something the English sought to squash upon our forefathers.

Sheriff Ward testified that when Bundy admonished several protesters to join him at the refuge, he sent the inmates from the jail that adjoins his office to another county, claiming that he and his deputies would lock themselves in if they were attacked.

What is the problem with his testimony? Well, if the group is talking about occupying the refuge, why on earth would they attack the sheriff’s office? Ward is merely being a useful idiot for a corrupt government. He is simply poisoning the well with testimony based on his fear rather than a reality.

“I had been feeling optimistic,” Ward said, indicating that he believed conflict could be avoided.

However, as he watched what he though was a live feed of Bundy pleading with others to join him, a deputy radioed him to indicate that the group was more than halfway to the refuge and that the rally he saw was time delayed.

“It made the hair on the back of my neck go up.… Something was wrong,” the sheriff said.

See? They weren’t going to attack the sheriff’s office. While the group claimed they were acting lawfully and under the Constitution’s provisions, which they were, Ward said that neither was true.

“There’s 200 years of case law” contrary to the occupiers’ view that the U.S. land belonged to the people of Oregon, said Ward.

Ward, who is a combat veteran claims the occupation was done military style. “What was described to me [by witnesses] was not peaceful but an armed room-clearing” of a building controlled by the U.S. Fish and Wildlife Service.

Ok, so Ward is describing hearsay. He did not witness it firsthand and so therefore, his claims regarding a military style invasion of an empty building is without merit.

Ward said that many of his conversations with Bundy were enjoyable, but on several occasions, he claimed that they ended with words similar to “they would bring hundreds of people to town to do my job for me.”

He said he was also told, “We can’t control what they may or may not do.”

Of course it sounded bad to him, but this is a man that got frightened because grown men were simply exercising their constitutionally protected rights.

Take a look at this picture. 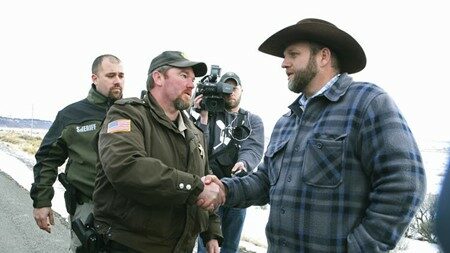 Does this look threatening to you? Did anyone see any of the live footage that Pete Santilli put out unedited for people to keep up with what was going on? Was any of that actually violent?

The media was at the site for over a month. There was no violence. None of that is true.

You see, when you blindly trust your government to tell you the truth and defend your God-given rights, you are willingly opening the door for them to destroy them. Sheriff Ward should be ashamed of himself for not taking a constitutional stand regarding the land issue. Sadly, he is nothing more than pawn in a bigger game. One day, those who used him will come for him too.

Hamas-Linked CAIR Calls for Destruction of Every Confederate Memorial

Epic Speech: Is Trump for Real? Watch As He Destroys ‘Hillary the Liar, Ruining America’

Epic Speech: Is Trump for Real? Watch As He Destroys ‘Hillary the Liar, Ruining America’