Biden: Yes, We Want to Raise Taxes by $1 Trillion

On Thursday vice President Joe Biden gave a speech in Iowa in which it should have utterly sunk the Obama campaign. He acknowledged openly that he and Barack Obama want to raise $1 trillion in taxes and let some of the Bush-era tax cuts expire. No doubt Republicans are going to pick this up in October ads.

“On top of the trillions of dollars in spending that we have already cut, we’re going to ask the wealthy to pay more. My heart breaks. Come on man,” Biden said.

The Vice President claims that Republicans often say ‘Obama and Biden want to raise taxes by a trillion dollars.’

“Guess what? Yes, we do in one regard: We want to let that trillion dollar tax cut expire so the middle class doesn’t have to bear the burden of all that money going to the super-wealthy. That’s not a tax raise. That’s called fairness where I come from.”

Now friends, that would be the last nail in the coffin of any campaign. Why the Obama camp is not sending old Joe back on vacation is beyond me. I cannot understand why he would be allowed to speak after his many gaffes in the current campaign.

“Fresh off admitting that America’s middle class has been ‘buried’ over the last four years, Vice President Biden went a step further today and fully embraced the president’s job-killing tax increases. The choice facing Americans in this election gets clearer every day,” Williams said.

The shameless hypocrisy of Biden was on display fully as he declared:

“It’s hard to keep up (with Romney and Ryan). You never know what game Gov. Romney is going to come with.”

Watch the clip below: 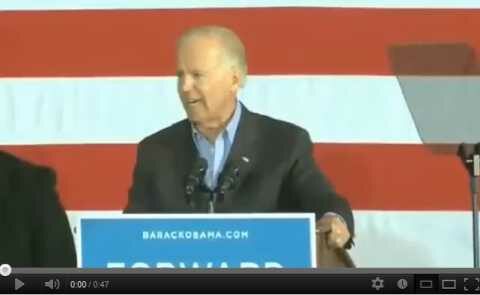 The Consequences of Not Banning Travel From Ebola-Ridden Nations