The last couple of weeks have seen a virtual bloodbath in cryptocurrency trading with the majority of all publicly traded digital coins and tokens experiencing losses ranging from 20% to 98%.

The carnage began when rumors swirled that China would limit ICO (Initial Coin Offerings) due to rampant fraud and uncertainty.

The rumors quickly turned to reality, when earlier this week one of China’s largest centralized crypto exchanges announced that they would be closing their doors to domestic currency trading, meaning that the tens of thousands of Chinese who had been helping to drive Bitcoin gains of over 500% over the last year would soon be removed from the market.

This led to an immediate and violent decline, with prices of Bitcoin going from a September 2nd all-time high of $4900 down to a brutal $3200 by Thursday morning.

And while prices appear to be recovering this morning (trading at $3695 at the time of writing) , we have to wonder if the words of Admiral Ackbar are applicable to today’s significant upswing:

Because according to Bitcoin.com, as of this morning, two additional large Chinese Bitcoin exchanges have confirmed that they will no longer offer cryptocurrency trading to the Chinese domestic population:

According to reports, all exchanges that deal with cryptocurrencies in China must shut down operations to stay compliant with the country’s regulators.

Following these rumors early this morning, the exchange Viabtc announced it would also be closing operations on September 30.

The price of bitcoin is down 38 percent since the two Chinese exchanges made their announcements.

After Viabtc revealed the trading platform would be closing, the exchange Yobtc detailed that it would be ceasing trade operations as well.

Yobtc gives the same explanation, but says they will be closing up shop on September 18 and customers should withdraw funds by then.

“With the spirit of the document, adhering to the prevention of investment risks, and the maximum protection of our user’s principle of interest we have decided to clear domestic currency trading,” explains Yobtc’s announcement.

It appears that, while blockchain technology certainly offers decentralized functionality and applications, centralizing global exchange operations that fall with the purview of government regulation could be a chink in the blockchain’s armor.

There are a variety of blockchain technologies currently being developed that aim to decentralize trading operations altogether, but for the time being these are either in alpha or beta testing, or simply remain White Paper concepts with no actual working models.

With that in mind, the shutdown of the world’s largest population of potential crypto traders, who were at one point responsible for something on the order of 90% of all trading in 2016, could lead to continued pressure on Bitcoin and other cryptocurrency until the extent of the shutdowns of Chinese exchanges becomes more clear.

And while Bitcoin may appear to be in recovery today at a price of $3695, it is important to keep in mind that this price is generally based on Western-based exchanges, because at this very moment, the same Bitcoin is trading for 19,999 Yuan on BTC China, or about $3056, over $600 less than the going price on exchanges used primarily by U.S. and European investors: 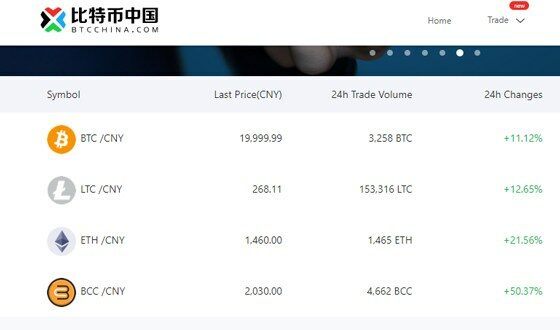 The massive price discrepancy between exchanges, coupled with the uncertainty surrounding domestic Chinese trading and the official position of the People’s Republic of China suggests that investors should be cautious as there may be more carnage to come before a return to sustained growth.

As one commentor on Zero Hedge noted:

“Uh boy, this may have turned a correction into a falling knife.”