The vile savages of Boko Haram have delivered on their promises to kill innocent students and anyone else who stands in their way. Boko Haram Islamic jihadist 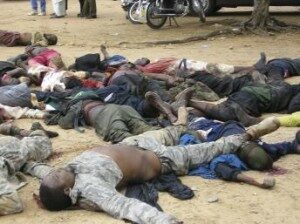 monsters stormed a college this past Sunday September 29th, viciously gunning down and burning 50 plus students as they slept. After the senseless slaughter, they torched classrooms, living up to their promise to destroy those who seek a Western education.

This was just the latest mass horror to be inflicted upon innocent people by Boko Haram, but what about the day before this attack? Muslim herdsmen killed 15 Christians. Less than 24 hours before this slaughter, a pastor and his son were killed by the Islamic militants, as were 28 others. So, yes, it is nearly impossible to keep up with the atrocities committed by Boko Haram, whose evil knows no bounds.

It would make it very hard to officially label the Muslim Brotherhood a terrorist organization when the Administration helped put them into power in Egypt, which was an epic failure, and has open sympathizers working in the DHS, among other government organizations. It would be a colossal conflict of interest, hence Mohammad Elibiary, among others surely.

Boko Haram is secretive, but their operations are every bit as terrifying as Al-Qaeda and other Islamic militants. “What is Boko Haram? It remains shrouded in mystery. Boko is the Hausa word for “book,” and commonly refers to Western education. Haram is the Arabic word for “forbidden.” Hostile to democracy, modern science, and Western education as non-Islamic, it is highly diffuse. Still, Nigeria’s federal government is addressing Boko Haram as an al-Qaeda-linked terrorist movement.”

Boko Haram is the very definition of a militant Islamic jihadist terrorist organization. They they have pillaged and raped a region. And they are holding Nigerians hostage.

In July, they attacked a boarding schooling, killing 30 students. They shot them dead and burned the buildings like they did at the agricultural school. And a month before this heinous attack, they shot up a secondary school in Yobe and in Borno.

But one of the most heinous attacks occurred in October 2012 when they “stormed the Federal Polytechnic College, “separated the Christian students from the Muslim students, addressed each victim by name, questioned them, and then proceeded to shoot them or slit their throat,” killing up to 30 Christians.

Most recently a new report confirms that Boko Haram has “bombed, burned, or attacked” 50 churches in Nigeria since January 2012.

But the most ominous and horrifying statistics comes from July 2013 and not because of the sheer number of deaths. It is the documented frequency with which Boko Harma is attacking Nigerians that is most troubling, and should sound world alarm bells that these terrorist jihadists must be stopped.

In July 2013 alone Boko Haram committed these acts of jihad.

Is this attention grabbing enough? What’s next? CAIR/Hamas Nigerian Security Tracker has acknowledged that the attacks are increasing, but, “Most of the victims in this violence are Muslim, but some are Christian.” Interesting assertion coming from a fellow Islamic terrorist organization.

When will the next attack be? Possibly today or tomorrow? More slicing, dicing, and killing by Islamic militants is a sure thing in Nigeria, and all the while the Obama Administration will look the other way. For a house infiltrated by Islam cannot condemn another.

How Can Israel Negotiate Peace With People That Are Absolutely Obsessed With Exterminating It?