So much rumor, misinformation and disinformation is going around, it is important for me to set the record straight. Here is what actually happened with Tommy Robinson, and where I stand.

A month ago, Tommy Robinson called me. This was an infrequent occurrence; we were not in constant contact, and he only called me with matters of great importance. He expressed yet again his frustration with elements in the EDL that had become even stronger in his absence — racist and antisemitic influences. These are issues I, too, had concerns about, as I expressed back in June 2011 and had cautiously withdrawn my support, but was reassured by Tommy that he would police the organization. In our September 2013 conversation, Tommy said he could no longer control those forces, and that he would have to leave the EDL. 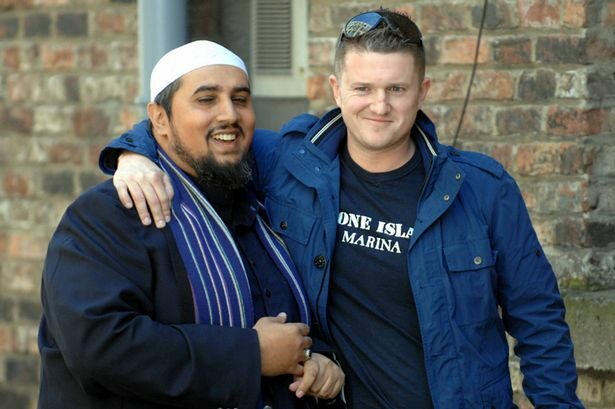 Not being on the ground in the UK, and having worked with him at a distance for four years, I understood his concerns, and looked forward to a new organization — perhaps even SIO-England. I did not know when he was going to make his move away from the EDL, and he did not tell me. The only thing he told me was that he was going to make the break before his upcoming court case — perhaps to incur the sympathy of the court.

Then, the night before he made his announcement, Tommy tried to contact me numerous times on Skype and by phone while I was busy with other matters. It was clear that it was urgent. Finally, we spoke on the phone, and it was on that phone call that he told me that he would be resigning from the EDL the next day, and that the Quilliam Foundation was going to be at the press conference — but he made that a minor point. I had no idea that it was a Quilliam press conference, and certainly had no idea that Tommy and Kevin Carroll would be led around like dogs 0n a leash. It was after that phone call, and before I had any idea that Tommy would be closely allying with false moderate Muslim deceivers who would crow about “decapitating the EDL,” that Robert Spencer and I composed our first statement, supporting Tommy and his decision. We never would have come out in support of him if we had known that he would soon be parroting politically correct nonsense about “extremists on both sides.”

Tommy told me that his move would not be announced until 6PM London time the next day, and asked me to hold our statement until then, but when I woke up the next morning, it was already all over the international media. That was the first indication that he had not been entirely up front with me about what was happening. Then at the press conference, both he and Kevin Carroll were the showcases of a Quilliam victory dance. They looked eerily reminiscent of the American POW’s taken by enemy combatants and forced to say things they did not believe before cameras.

I only subsequently learned, after releasing our initial statement of support, that he had been meeting with Islamic supremacist deceivers like Mo Ansar for 18 months, and was taking instruction on Islam from the false moderates of the Quilliam Foundation. And I didn’t hear about it from Tommy, who never gave me any hint of any of this — I read about it in the press along with everyone else. Robert Spencer and I explained why Robinson’s association with Quilliam was so deeply troubling in our second statement: Quilliam “came out in favor of the “Palestinian” jihad against Israel and the ending of Israeli defensive operations. Also, when the Quilliam Foundation began, its founder Ed Husain attacked Ayaan Hirsi Ali, Ibn Warraq and Robert Spencer — would a real opponent of jihad and Islamic supremacism do that? I don’t think so. Spencer noted then that Husain ‘wrote disingenuously about Islamic teaching on apostasy and other matters, and ignored the deep scriptural, theological and legal foundations of Islamic violence and supremacism. Hardly a promising performance for a genuine reformer.'”

Quilliam is even worse than that. It published a document in June 2013, two months after an Islamic jihadist beheaded Lee Rigby on a London street. Instead of calling for reform of the jihad doctrine that led to Rigby’s murder, it only discusses “extremism” in general. The only group mentioned in it is not Anjem Choudary’s Muslim group, of which the murderer Mujahid Adebolajo was a member, but the EDL. It is clear even from this that Quilliam considers the EDL, not jihad groups, its chief enemy. You’ll notice the report is about ‘extremism’ in general and the only people/group mentioned by name are the EDL. And in this document, Quilliam tries to mislead people into believing that political Islam arose in the 19th century, and is not a constant and intrinsic part of Islam. (Ever heard of the caliphate?)

Mo Ansar is another deceiver, as Spencer and I noted in our statement: “Look at this interview with Ansar: he lies about Muhammad’s child bride Aisha, claiming she was 18 or 20 (get the truth here — she was 9 when Muhammad consummated their marriage) and tries to whitewash Islam’s institutionalized mistreatment of women. This is not ‘Islamic reform.’ This is just deception.”

It has become painfully obvious that the enemies of freedom have broken Tommy Robinson. The British authorities’ harassment, the systematic persecution, the jailings, the solitary confinement, the threatening of his life, the threats to his family, his having to move several times, his children having to change schools, the constant false charges — he finally cracked. They broke him. He made a deal with the devil. He didn’t want to go back to jail, and this looks like his bid to stay out.

Today at the Daily Beast, the gleeful reporter doesn’t quote Robinson, but says that he “distanced himself from some of Geller’s most egregious remarks.” I challenge the Daily Beast reporter to produce the quotes. What exactly did Tommy distance himself from? And then he quotes Tommy explaining why he won’t denounce me now: “I went to America to speak at one of their events. I feel indebted to Pamela. I have a great deal of respect for her personally because she helped my family when I was in custody. She provided a roof over our head.” This cop-out from Tommy — that he wouldn’t denounce me because I supported him financially — was the lowest blow of all. I was not supporting the EDL financially. We gave some money to his wife and kids when Tommy was in jail. And Tommy has said that before, implying that his loyalty was bought, and was not because of ideological agreement. He’s been using the quiet help I gave to his wife and kids as one mom to another. I didn’t do that for the organization. I did that as a human being.

It is clear what is happening. Now he is the poster boy for the stealth jihad. It seems they have taught Tommy well. His deception to friends and colleagues mirrors the Islamic teachings of kitman (lie by omission) and taqiyya. So Tommy Robinson and Kevin Carroll are no longer on the SION board. As for the EDL, I hope they have strong enough leadership to purge the ugly elements and emerge as a stronger and more effective counter-jihad force.

Today the New Era Tommy Robinson went to a Muslim area to speak about true, peaceful Islam, and got beaten up by Muslims who haven’t gotten the reform message, but have obviously read the quran.

Under attack in town, American film crew got it on camera. Good punch to be fair! America will see first hand pic.twitter.com/jyFKZUZCGe

Tommy Robinson, RIP. Long live Steven Yaxley-Lennon — for as long as they let him live.