“Diversity” is the most loaded word in the American vocabulary, because in today’s Obama race obsessed world of “equality” it means to redistribute a potential white majority. Regardless of how ridiculous it is, homogenous grouping is perceived as “racist.” Forget uniform standards of entry, all that matters are appearances. In a Brooklyn Elementary School, Ditmas Park Pubic School 139, such an action is being implemented. Principal Mary McDonald informed parents that the popular Students of Academic Rigor (SOAR) program, and two other noted in house programs, would no longer accept applications. What are accelerated students to do? Gifted and talented programs are in schools for a reason. But, apparently school administrators would rather see mass group inferiority over individual success. 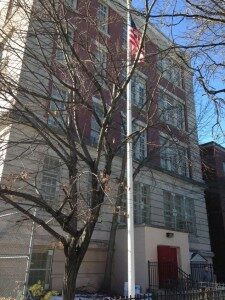 Do we really have a race problem in America? Not in the way it is presented. We have a culture-wide problem in America because everyone is hamstrung by the death grip of political correctness. President Obama and his racist White House would have everyone believe that the reason he is not succeeding is because the people can’t accept a black President. Attorney General Eric Holder wants racially proportional discipline in schools to “even things out.” They both dangerously miscalculate. The reason a person does not succeed has nothing to do with skin color, but personal character, work ethic, and their esteem. But any thought to personal responsibility has been replaced by cultural Marxism.

In one Brooklyn Elementary School, students are going to suffer because a principal cares more about “heterogenerous grouping” than academic excellence. Not that American schools have anything to be proud of in terms of academic excellence. Common Core will successfully create a generation of progressive indoctrinated zombies, with a particular pension for Islamic jihad.

A popular gifted program will get the axe after Ditmas Park school officials chose diversity over exclusivity.

Citing a lack of diversity, PS 139 Principal Mary McDonald informed parents in a letter that the Students of Academic Rigor and two other in-house programs would no longer accept applications for incoming kindergartners.

“Our Kindergarten classes will be heterogeneously grouped to reflect the diversity of our student body and the community we live in,” Mary McDonald told parents in a letter posted on the photo-sharing site flickr and obtained by Ditmas Park Corner.

To punish accelerated students because the program lacks “diversity” is absurd. A student applies, takes a test, and he or she makes the cut. It is a simple and clear cut process. The fastest runner wins the race, but in this lazy, mediocre “participation” society, school administrators would rather make sure it looks like no one group is getting preferential treatment. In Marxist Bill de Blasio’s New York City, this will go over well.

More than two thirds of the school’s roughly 1,000 students are black or hispanic while Asian-American and white students made up 28%, according to Education Dept. records.

At least one parent described the small gifted program, Students of Academic Rigor — or SOAR — as overwhelming caucasion, although others disputed that characterization.

McDonald didn’t respond to numerous requests for comment. A city Education Dept. spokeswoman said cutting the programs was the decision of the school.

It is possible that it only took one complaint of “overwhelming whiteness” to make this Brooklyn elementary school decide to cut this program. Based upon the letter that was sent out (below right), this decision has everything to do with perceived inequality. Instead of demanding excellence from incoming students and allowing those who qualify for the SOAR program to participate, they are actually holding them back. They are going to be singularly responsible for making the students who would qualify for this program incapable of fulfilling their academic potential. 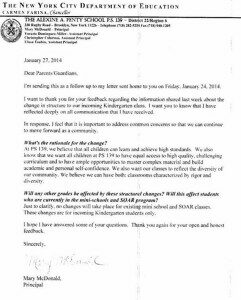 Would a coach substitute his best quarterback in a crucial moment in a game over an “equal time” dispute? If this is how stupid school administrators are going to be about diversifying every program, then mediocrity is deserved.

One mother, a Sudanese immigrant, said the program was brimming with white students — but she was looking forward to her daughter joining after years of high test scores.

“Where are they going to put the higher-level students?” asked the woman, who declined to give her name. “Sometimes, there are different levels, and teachers can’t handle all the levels in one class.”

Academically successful students may be assigned to the SOAR program (Students of Academic Rigor), with accelerated classes.

The SOAR program and the mini-schools are in the most demand. Mini-school students are chosen by lottery. Children must take a test to be admitted to SOAR.

Admission to SOAR is based on a test score. However, as with anything in politically correct America, this is still suspect. God forbid anyone would think that the scantron machines gave preferential scores to Caucasian students. What is happening at this Brooklyn Elementary school is a microcosm of what is happening on a much wider scale. This is how you destroy a country.

Other parents and relatives picking up students on Wednesday said the school should keep the program as is.

“It’s been running like this for so long,” said 16-year-old Maruful Hossain, who attended the school as a child and now picks up his little brother there. “It will always be diverse — no matter what.”

No, we can’t do that. There must be an absence of a majority of whiteness in any given arena. In order for the Marxist utopia to work in America, everyone must be on an equal playing field. Forget hard work, merit, and individual responsibility. That was once what made America great. Today, this concept is too white, when it was intended to benefit everyone.