California Business Owner with 600 Employees Chimes in on Obamacare Effect

Yesterday I received an email from a California Business Owner with 600 employees. Let’s tune in to how Obamacare affected him, as well as his employees. 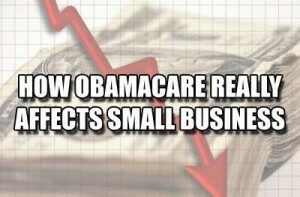 Under Obamacare, no one can opt out without penalty, and the rates are double or triple, depending upon the plan. Our 750k insurance for 250 employees is going to $2 million per year for 600 employees.

Our employees share of the premium goes from $7/week for the cheapest plan to $30/week. 95% of my employees were on that plan.  Remember, we used to pay 50% now we pay 91.5% and the premiums still go up that much!!

They can’t afford that to be sure. Obamacare will kill their propensity to seek medical care. More money for less care? How does that help them?

Here is the craziest part. Employees who qualify for mediCAL (the California version of Medicare), which is most of my employees, will automatically be enrolled in the Federal SNAP program. They cannot opt out. They cannot decline. They will be automatically enrolled in the Federal food stamp program based upon their level of Obamacare qualification. Remember, these people work full time, living in a small town in California. They are not seeking assistance. It all seems like a joke. How can this be the new system?

Pelosi, pass the bill to find out what’s in it? Surprise! You’ve annihilated the working class.

In a followup email, I asked what would happen if he dropped coverage altogether. Here is his reply …

Our calculus suggests that the penalties could be worse because it is per employee per year. There are different kinds of penalties too. One for not offering a qualifying plan and one for when an employee signs up for an exchange in the absence of a plan at work. However, more importantly than the money is the unions.

If I drop my health plan, we would be exposed to union maneuvering.

As Steve Miller said, “clowns to the left and jokers to the right”

Clown to the Left, Jokers to the Right

I offer the following musical tribute, by Stealers Wheel.

SongFacts comments on Stuck In The Middle With You by Stealers Wheel.

Also known simply as “Stuck In The Middle”, this Stealers Wheel classic was co-written by the group’s guitarist Gerry Rafferty and keyboard player Joe Egan.

In his obituary of Rafferty for the January 5, 2011 issue of the Daily Telegraph, Martin Chilton said of this song that it was
“Written as a parody of Bob Dylan’s paranoia, it ridiculed a music industry cocktail party, with the lyrics:

‘Clowns to the left of me, jokers to the right,

here I am, stuck in the middle with you.’

To Rafferty’s utter disbelief his parody, composed as little more than a joke but with a catchy pop arrangement, struck gold, selling more than a million copies. The song reached a new generation of listeners when Quentin Tarantino used it in the notorious ear-slicing scene in his 1992 movie Reservoir Dogs.

As an interesting footnote, unions were the biggest Obamacare proponents, but now they too are upset with it.

Obama to the rescue …

On November 7 the New York Post commented Rule lets unions avoid ObamaCare tax … “Buried in the new rules is a proposal to exempt ‘certain self-insured, self-administered plans’ from the fee in 2015 and 2016. That description applies to many union plans, according to experts.“

On November 17 the Wall Street Journal commented on such a ruling in great detail in its article ObamaCare’s Union Favor.

The Affordable Care Act’s greatest hits keep coming, and one that hasn’t received enough attention is a looming favor for President Obama’s friends in Big Labor. Millions of Americans are losing their plans and paying more for health care, and doctors are being forced out of insurance networks, but a lucky few may soon get relief.

Earlier this month the Administration suggested that it may grant a waiver for some insurance plans from a tax that is supposed to capitalize a reinsurance fund for ObamaCare. The $25 billion cost of the fund, which is designed to pay out to the insurers on the exchanges if their costs are higher than expected, is socialized over every U.S. citizen with a private health plan. For 2014, the fee per head is $63.

The unions hate this reinsurance transfer because it takes from their members in the form of higher premiums and gives to people on the exchanges. But then most consumers are hurt in the same way, and the unions have little ground for complaint given that ObamaCare would not have passed in 2010 without the fervent support of the AFL-CIO, the Teamsters and the rest.

The unions ought to consider this tax a civic obligation in solidarity with the (uninsured) working folk they claim to support. Instead, they’ve spent most of the last year demanding that the White House give them subsidies and carve-outs unavailable to anyone else.

There’s no conceivable rationale—other than politics—for releasing union-only plans from a tax that is defined as universal in the Affordable Care Act statute. Like so many other ObamaCare waivers, this labor dispensation will probably turn out to be illegal.

Illegal? Yes, but who cares if it buys union votes. Certainly not president Obama.

And everyone else pays the price.