Some people are still under the impression that the A Century Ago: Rockefellers Funded Eugenics Initiative to Sterilize 15 Million Americans ” tit>Rockefeller Foundation is all about philanthropy: helping people and saving lives. Those people are Bill Gates and Bill Gates and Warren Buffet.

In reality, the Rockefellers have been one of the largest financial backers and drivers of the eugenics and the depopulation agenda for over a century now.

Check out these 1915 newspaper clippings we came across in research.

The first is from The Salem Daily Capital Journal printed Thursday, November 4th, 1915. 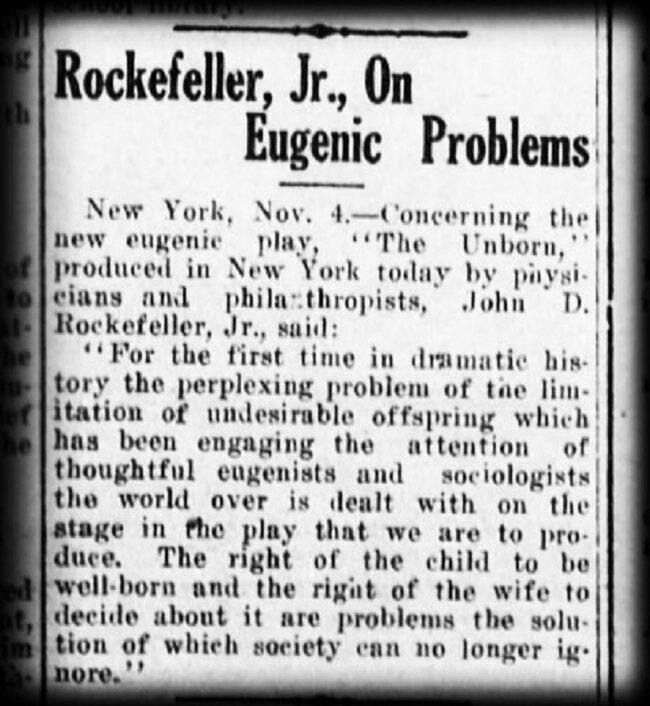 The article, “Rockefeller, Jr., On Eugenic Problems,” is about a play produced by the Rockefellers called “The Unborn.” Jr. says:

“For the first time in dramatic history the perplexing problem of the limitation of undesirable offspring which has been engaging the attention of thoughtful eugenists and sociologists the world over is dealt with on the stage in a play that we are to produce. The right of the child to be well-born and the right of the wife to decide about it are problems the solution of which society can no longer ignore.”

This is what propaganda looked like before we had television — the Rockefellers funding a stage play pushing a eugenics depopulation agenda all the way back in 1915!

But wait… At first glance, it sounds like modern-day birth control and a woman’s right to choose, doesn’t it? (Two things which the Rockefellers have also been massive financial backers and drivers of for decades now.) Well, it’s not.

The key words here are “undesirable,” which in this old context it means something a lot different, and “well-born” — the right of the child to be “well-born.”

Just a few months earlier, the Rockefellers also appear in multiple articles about a new eugenics enterprise printed in papers across the country like this one in The Washington Herald on September 3rd, 1915.

This one discusses the joint eugenics venture between Mrs. E.H. Harriman (mother of future statesman and Skull & Bones secret society member Averill Harriman); John D. Rockefeller; Andrew Carnegie; and scientist Alexander Graham Bell, the guy who invented the telephone and who was apparently a huge eugenicist.

(On a side note, information regarding whether or not Bell developed the telephone while working on a way to be able to contact Satan directly was not included in this particular article.)

Apparently John D. and Co. were giving “liberal financial assistance” (read: millions) to fund a “gigantic eugenic enterprise…to ascertain what is the matter with the human race” that had been going on for four years prior and which ended in the announcement in this article of a campaign being launched “for the sterilization of 15,000,000 Americans.”

Studies in eugenics had been “quietly conducted” for nearly half a decade not just at Cold Springs Harbor, but “by field workers all over the world.”

The article ends with,

“The organization, after his four years’ work in this country and Europe reached the conclusion that sterilization of defectives was the greatest work for them. Statistics gathered reveal the amazing fact that 10 per cent of the present population of the United States are defectives, who must be blotted out as reproducers of human life.”

“Undesirables” or “defectives” could mean anything from people who had committed crimes to people who drank alcohol often, or people who were considered feeble-minded, physically handicapped or sick people and even the impoverished or people simply considered to be of poor breeding.

Children born to parents such as these were not considered to be “well-born.”

Under the guise of “fixing” the human race, these elite got together and funded a massive campaign to permanently sterilize 10 percent of America.

The same elite robber barons who had consolidated and monopolized the oil, rail, steel and banking industries took it upon themselves to also push for laws to restrict which people might be allowed to have babies, all while lauding themselves and their blue blood friends as the types that should reproduce as much as possible.

During the era leading up to World War II, eugenics laws were passed in 27 states which allowed for the forcible sterilization of tens of thousands of Americans.

Now you know what kind of powerful elite (then-) millionaires were behind those laws.

As we’ve previously reported, “Following World War II, Eugenics was re-branded to cast of its associations with the Nazis, and emerged, as it were, in the form of such social policy topics as ‘population control,’ ‘family planning,’ abortion/Planned Parenthood, health care, various types of genetics, even laced in between such agendas as global warming/climate change – which leads to arguments about reducing the burden of over-population upon the earth.”

Later projects funded by the Rockefeller Foundation included everything from Margaret Sanger and Planned Parenthood, to an anti-fertility vaccine among others. These people spent millions back then and continued to do so throughout the decades.

Do you really believe the motives behind the money have changed?

The ultimate goal — total control over society and depopulation — has never changed, regardless of what they call it now or how they try to paint it in a positive light today.

Even at a time when eugenics was en vogue, not everyone was on board with targeting the poorest and most vulnerable in society in a world run by Rockefeller wealth. In the October 8th, 1915 edition of The Day Book, R.F. Paine made just such a case:

The millions of Mrs. Harriman, relict of the great railroad “promoter,” assisted by other millions of Rockefeller and Carnegie, are to be devoted to sterilization of several hundred thousands of American “defectives” annually, as a matter of eugenics.

It is true that we don’t yet know all that the millions of our plutocracy can do to the common folks. We see that our moneyed plutocrats can own the governments of whole states, override constitutions, maintain private armies to shoot down men, women and children and railroad innocent men to life imprisonment for murder, or lesser crimes. And if we submit to such things, we ought not to be surprised if they undertake to sterilize all those who are obnoxious to them.

Of course, the proposition demands much on who are the declared “defective.”

The old Spartans, with war always in view, used to destroy, at birth, boys born with decided physical weakness. Some of our present day eugenists go farther and damn children before their birth because of parents criminally inclined. Then we have eugenic “defectives” in the insane and incurably diseased…

But isn’t there another sort of “defective,” who is quite as dangerous as any but whom discussion generally overlooks, especially discussion by senile, long-hailed pathologists, and long-eared college professors involved in the Harriman-Rockefeller scheme to sterilize?

A boy is born to millions. He either doesn’t work, isn’t useful, doesn’t contribute to human happiness, is altogether a parasite, or else he works to add to his millions, with the brutal, insane greed for more and more that caused the accumulation of the inherited millions. Why isn’t isn’t such the most dangerous “defective” of all? Why isn’t the prevention of more such progeny the first duty of eugenics? Such “defectives” directly attack the rights, liberties, happiness, and lives of millions.

Talk about inheriting criminal tendencies! If there a ranker case of such than the inheritance of Standard Oil criminality as evidenced in the slaughter of mothers and their babies at Ludlow?

Sterilization of hundreds of thousands of the masses, by the Harrimans and Rockefellers? Let’s first try out the “defectives” of the sons of Harriman and Rockefeller!