So yesterday there was barely a peep from the “protesters” who barely showed up. While there were some who protested Chick-Fil-A for their pro-marriage stand based upon the Bible, for the most part it was relatively quiet, which makes the point that these people are 1) a very small minority, 2) don’t really have the core convictions they claim, like those who showed up on Wednesday, and 3) they are simply incapable of dealing with the issue in a mature way.

Carly McGehee, a Dallas political activist came up with the idea to have a “kiss-in” protest at Chick-Fil-A. I mean I’m sure it took a lot of thought to come up with that. While her Facebook page began all the hoop-la, and more than 15,000 people said they would attend (which is about the amount of people that showed up at one Charlotte, NC Chick-Fil-A on Wednesday), the people that did attend were completely caught off guard.

Decatur, GA actually saw a whopping “more than 20” protestors. Homosexuality is not popular, nor is it normal. The organizer of the “non-event,” Marci Alt, 48, of Atlanta even invited the president of Chick-Fil-A to her house for dinner. Cathy has not replied, nor do I really expect him to do so.

Two young ladies weren’t attending the event. Bria Kam and Chrissy Chambers from Atlanta wrote a song about why they were no longer going to eat the chicken sandwiches and waffle fries they love, and performed it in a YouTube video. Again, they simply demonstrated their own hypocrisy in the video, showing their hatred. I’m willing to guess though that these ladies probably don’t have the fortitude to actually stay away from those tasty chicken sandwiches and yummy lemonade for long. Once all the brew-ha-ha is over, they’ll be spending money like before. After all, Chick-Fil-A’s values have been in existence long before they were born. By the way for Bria and Chrissy, you sing “can’t have it anymore.” Actually you can. No one is stopping you. It’s your choice to not eat at Chick-Fil_A, just like it’s your choice whether you want to engage a woman or a man in sexual intimacy.

We have heard the name calling in the media and we have heard how “hateful” Chick-Fil-A is, but what we have witnessed, not only in the past two weeks, but specifically on Friday simply shuts the mouths of those who are proclaiming lies and demonstrated who the real haters are. So what was Chick-Fil-A’s response to these individuals maligning them, slandering them, distorting the facts and basically thumbing their noses at the franchise? Love. That’s what Chick-Fil-A showed. They showed those that hate them love. 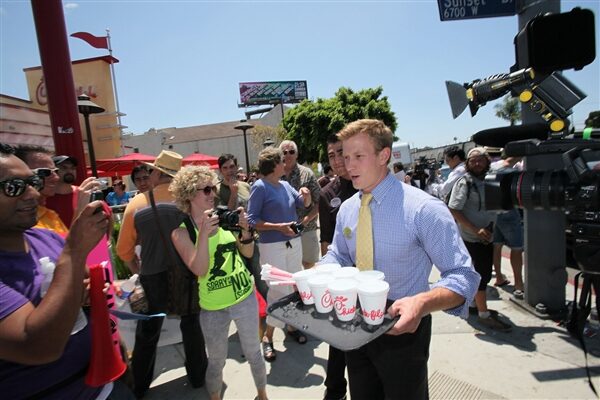 A Chick-fil-A employee hands out water at a “Chick-fil-A Is Anti-Gay!” protest Wednesday in Hollywood. Other outlets were mobbed as patrons showed their support for the chain.

That’s right, Chick-Fil-A didn’t back into a corner and talk about the people outside and fume at them or make derogatory statement. They went out and met them, were friendly to them and sought to serve them.

What is ironic is the fact that many held up signs that said “Jesus ate fish” as though that had anything to do with it and “Hate is not a family value.” Now this last one is, as I said, ironic. The hatred promoted by the members of the homosexual hate group who were involved in this protest should probably consider the values they are passing on to others. After all, Ms. Alt, the organizer, has two small children. What is she actually teaching them? She’s teaching them that people cannot have an opposing view without being labeled as haters and being treated as such, which the other side not only disagrees with her, but humbly seeks to serve those like her in love.

Tell me, if your kids grow up do you want them to behave as sexual deviants and on top of that bring their sexual deviancy out of the closet instead of clean it or would you prefer to see them become fine upstanding citizens who though they disagree with others seek to do the right thing?

I know which one I prefer. Again, kudos to Chick-Fil-A for the display of love, morals and conviction in the midst of hatred and demonizing. May you always honor the God of the Scriptures and the Lord Jesus Christ.

UPDATE: Many of you asked how you might express support for Rachel, the young woman in AZ who had hate expressed towards her by the now jobless Adam Smith. Well a website has been established for people to show their support of Rachel and she may just appear on Fox News as well. Here’s the link. 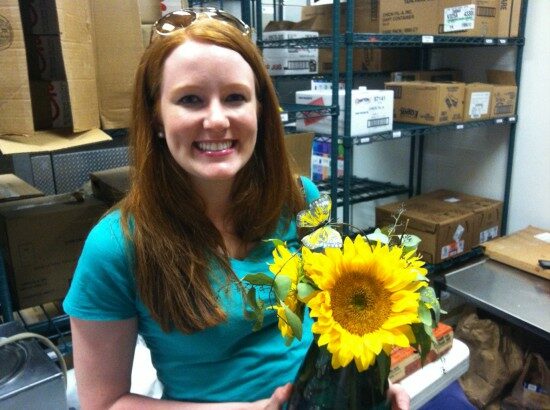 We stopped by CFA to find these flowers given by a customer to Rachel. They were anonymously given. Thank you for your kindness and support.

UPDATE 2: Adam Smith, the man that berated Rachel at the Chick-Fil-A, made an apology video of sorts. While he does apologize to Rachel, which seems genuine and honest, but he continues on with his rant against Chick-Fil-A. What the problem is in the video is he fails to see the ‘destructive nature of the homosexual community’ and the hatred that they clearly show. He continues to put forth a lie that homosexuals rights are under attack. The problem is that he is promoting special rights for homosexuals. They already possess the same rights as everyone else.

Hillary’s New Tactic to Dismiss Email Server Controversy: Laugh It All off as a “Conspiracy Theory”

Remembering the Victims of 9/11 Jihad

Remembering the Victims of 9/11 Jihad