CIA Officials Testify That They Disagree Over Benghazi Stand Down Order

Congressman Lynn Westmoreland (R-GA), who chairs a House intelligence subcommittee, claims that there is a disagreement between Central Intelligence Agency officers on how quickly they were able to go and provide aid to those under attack and avoiding violent encounters in Benghazi, Libya on September 11, 2012.

Complaints that the White House, Pentagon and State Department may not have done enough before and during the attack to save U.S. Ambassador Chris Stevens and three other men, along with accusations that it engaged in a cover-up after the attack, have continued to dog the Obama administration. One of the allegations was that U.S. officials told the CIA to “stand down” and not go to the aid of the embattled Americans — charges that top CIA and Defense and State Department officials have denied.

A senior intelligence official confirmed that the CIA officers on the ground in Benghazi responded to the diplomats’ call for help by trying “to rally local support for the rescue effort and secure heavier weapons.” When it became “clear that this additional support could not be rapidly obtained,” the team moved toward the diplomatic compound. The intelligence official spoke on condition of anonymity because he was not authorized to discuss the attack publicly by name.

The CIA team leader and the CIA chief who was based at the Benghazi annex told committee members that they were trying to gather Libyan allies and intelligence before racing to the embattled compound, worried that they might be sending their security team into an ambush with little or no backup, possibly creating more American casualties. 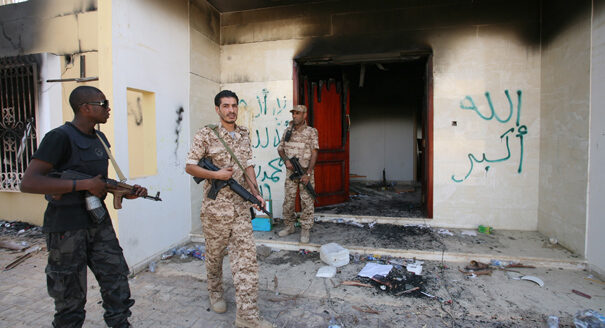 According to another AP report on the subject:

One allegation was that U.S. officials told the CIA to “stand down” and not go to the aid of the Americans. Top CIA and Defense and State Department officials have denied that.

The testimony from the CIA officers and contractors who were in Libya on the night of Sept. 11, 2012, bolster those denials, but also shed light on what may have led to the delay of up to 30 minutes to respond, according to the varying accounts.

None of those who testified said a quicker response would have saved the lives of Stevens and communications specialist Sean Smith at the temporary diplomatic facility.

The senior CIA officers in charge in Libya that day told Congress of a chaotic scramble to aid Stevens and others who were in the outpost when it was attacked by militants on the 11th anniversary of the attacks of Sept. 11, 2001.

Those CIA leaders decided they and their security contractor team should wait before rushing from their annex into the violence roughly a mile away. They said they were trying to first gather intelligence and round up Libyan militia allies armed with heavy weapons, according to the testimony by the CIA officers in charge.

“The team leader knew he was on his own,” Westmoreland said.

He went on to explain how the lack of air support to all CIA employees was due to a 2011 CIA memo sent to employees following NATO forces ending their mission in support of the Libyan revolution.

“It basically told people in Benghazi…if you are attacked, you get your ‘package’ (the personnel they are charged with protecting) and you get out,” he said.

At least one Army Ranger was told to “wait” at least twice, and that patriot argued over the order with his security team leader, according to testimony.

Not one person that testified believed they could have saved Ambassador Christopher Stevens if they had arrived sooner. They did however fight their way into the compound, beating back the jihadists there and began searching for survivors inside the compound. They were able to locate five State Department security personnel inside the compound in various locations.

Most interesting in the AP report was this little tidbit of information:

They found computer specialist Smith, dead from smoke inhalation, but couldn’t find Stevens and decided to fall back to the CIA annex, because the crowd was build

ing outside again, Westmoreland and the other officials said.

Stevens was found in a safe room and taken by Libyan civilians to a nearby hospital but also died from smoke inhalation.

While this last part is part of testimony, there was a report from an Al-Qaeda weapons expert that Ambassador Stevens died from a lethal injection. Nothing was said about Al-Qaeda security that was provided to the mission in Benghazi. No mention was made about former Egyptian President and Muslim Brotherhood member Mohammed Morsi’s involvement, which was pointed out by Pamela Geller immediately following the incident, and came with video evidence, including Libyan intelligence that implicates Morsi in the attacks.

Are we to believe that the CIA knows nothing of any of these things? If they are unaware of this information, it does beg the question whether they are working with the enemy or ignorant of what is truly taking place. I’m not one that believes they are ignorant, seeing that they were more than likely engaged in running weapons through Libya. One has to wonder, given the nature of what may have been taking place in Benghazi, if a “stand down” order was even necessary.