While I understand that Ferguson has become a big news story, the fact remains that Islamic jihadists are walking a murder mile in Iraq, slaughtering Christians, other non-Muslims and even other Muslims, while capturing many women to sell as sex slaves in the marketplace. Just yesterday, we reported on the execution of journalist James Foley. So, why is it that CNN’s Jake Tapper and his news crew completely ignored an “ISIS is here” sign during a recent interview as he walked the streets of Ferguson, Missouri?

In the video below, which is of a television screen, not just a CNN feed, Tapper can be seen walking alongside a man and discussing what is going on in Ferguson from his perspective.

However, as the video continues, someone is running behind them holding up a sign that reads, “ISIS is here.” Clearly, this is a reference to the Islamic jihadists that are overrunning Iraq.

Someone might pose the reason for Tapper’s lack of coverage is that he was focused on his interview and doesn’t have eyes in the back of his head. That is true, but his camera man is obviously filming the entire thing and he has an earpiece which producers should have been able to make mention of the sign to him.

But no, not with CNN. This is the same network caught faking news on Syria. They aren’t interested in a silly sign, are they? Perhaps had the person taken Jake down and beheaded him on the streets they might have paid attention though.

Interestingly enough, no one walking alongside the person holding the sign seems worried about it either. So this isn’t just a blunder on the part of CNN, it really causes one to step back and wonder what is going on in the Ferguson community. Why didn’t any of the protesters point out the sign? Do they even know what ISIS is?

It has been known that ISIS has called upon its supporters in the US to join in the Ferguson protests. 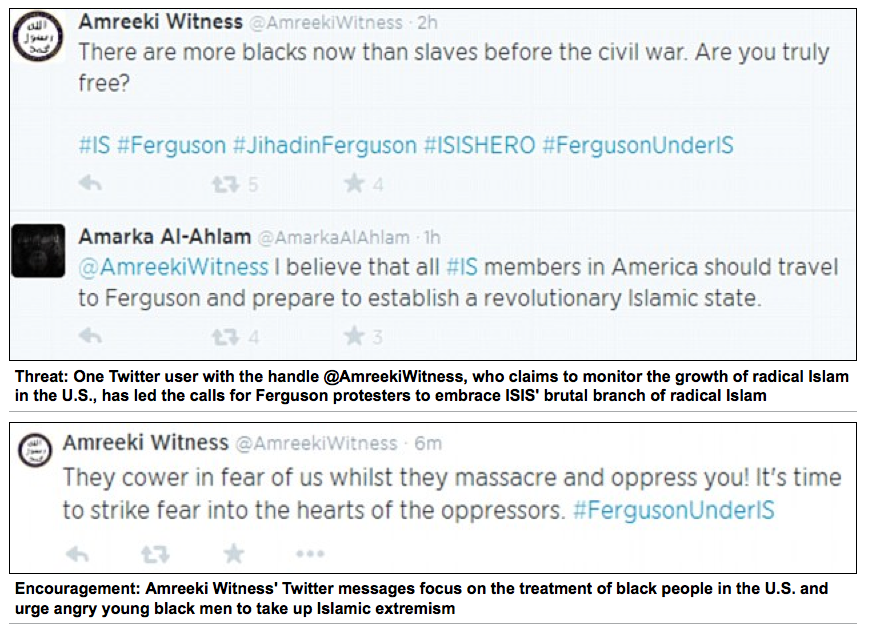 Tapper did declare near the end of the video that there were, “no tear gas, no rubber bullets, no shotgun sells, just a lot of conversation and chanting.” Of course, not only did he miss that, which you can see here, but he missed the fact that a proud supporter of ISIS was right behind him.

According to Pamela Geller, Hamas-CAIR has been orchestrating and exploiting the violence and divide in Missouri to achieve their own goals. Geller writes that they are “using the violence in Ferguson as a wedge issue, Hamas-CAIR is tying the faux ‘Muslim victimhood’ fiction to the ugly chaos in Missouri, seeking to gin up the jihad among American blacks and Muslims.”

In other words, they have their own provocateurs, just like the New Black Panthers and DHS.

As was reported last week, an ISIS supporter flashed a digital version of the black flag of jihad just outside the White House with the message, “We are here #America near our #target soooooooon.”

Just yesterday, we ran a story about the latest ISIS threat to America to “drown all of you in blood.” There isn’t much in the mainstream media with regard to that threat, is there?

Knowing all of this, why would there not be coverage of the sign holder? I’ll let the reader to decide.

White House Receives Petition To Stop All Islamic Immigration Into US