Whether relevant or coincidental, it is noteworthy that on June 29, 2011 – just three days after her signature granted Malik Obama’s Foundation 501(c)(3) status on June 26, 2011 (a SUNDAY) – then IRS official Lois Lerner sent out a bizarre email. In it, she makes a comment about it being unbelievable how her hard drive and those of others crashed at around the same time.

The email in question was tweeted out by the House Oversight and Government Reform Committee, one of the committees investigating the IRS scandal:

If you can believe it, here’s an actual email sent by Lois Lerner: pic.twitter.com/1VY09EYaCz

To be clear, it is not known what specifically prompted Lerner to send out that email but according to the Inspector General, the emails recently recovered allegedly indicate “criminal activity.” As Shoebat.com has reported, the treatment received by the President’s brother from the IRS when it comes to the Barack H. Obama Foundation (BHOF), appears to qualify. 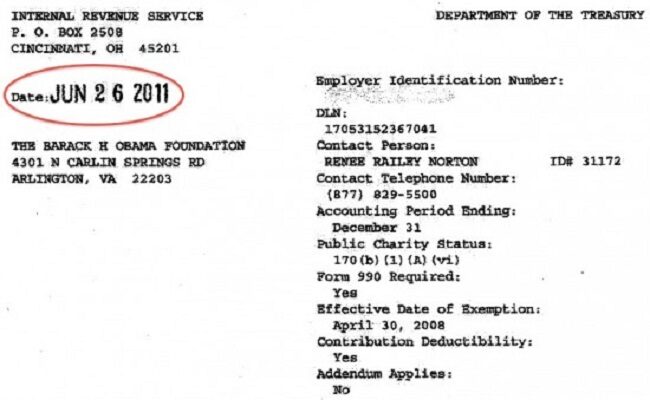 While it may not be illegal to approve a 501(c)(3) application on a Sunday, it certainly is strange, especially when considering the circumstances under which the BHOF was approved. Founded in April of 2008, the BHOF appears to have operated illegally for years, collecting tax-deductible contributions without filing the necessary paperwork.

Then, in May of 2011, the National and Legal Policy Center (NLPC) filed a formal request with the IRS to investigate BHOF’s status.

While NLPC didn’t hear back from the IRS, the IRS began the process of expeditiously processing BHOF’s paperwork, even retroactively backdating the date of exemption to April 30, 2008 – a full 38 months. It is illegal to operate as a tax-exempt organization for more than 27 months without tax-exempt status.

Lerner very well may have committed a serious crime by backdating the application but that’s not the worse part. As Shoebat.com has reported, contributions received by the BHOF appear to have been used for nefarious purposes, to include financing Islamic terrorism, possibly even some of the Christian genocide the world is seeing today.

Here is Chaffetz talking with Greta van Susteren about the magical recovery of tens of thousands of emails: