Editor’s Note:  Anna Tomerlin has done some extensive investigation into the family line of Rafael Edward “Ted” Cruz and frankly, the information is quite disturbing.  Anna has graciously allowed us to repost her article to inform the public.

It is time to choose The Constitution and The Republic over Politicians and Political Parties. Ted Cruz’s Natural Born Citizen status is in question. For that matter his citizenship status is in question. Cruz is an agent for a foreign power and foreign invader. Rafael Edward “Ted” Cruz is not a United States citizen. 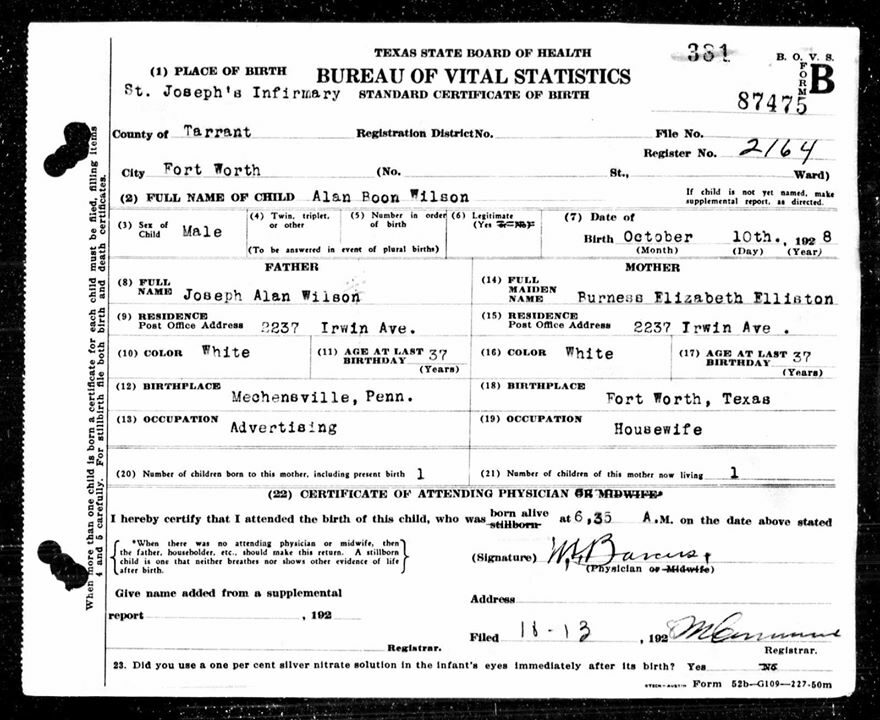 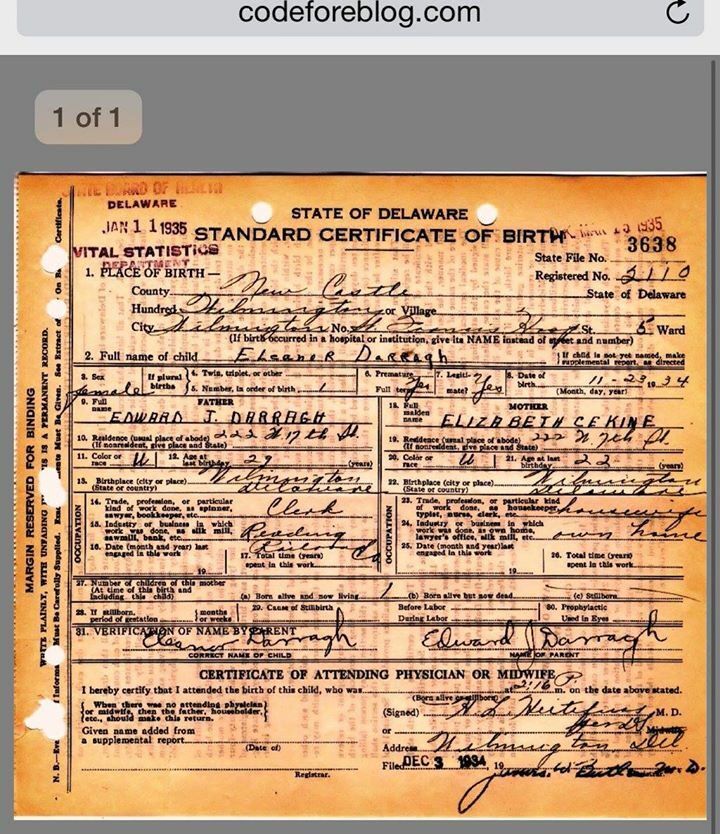 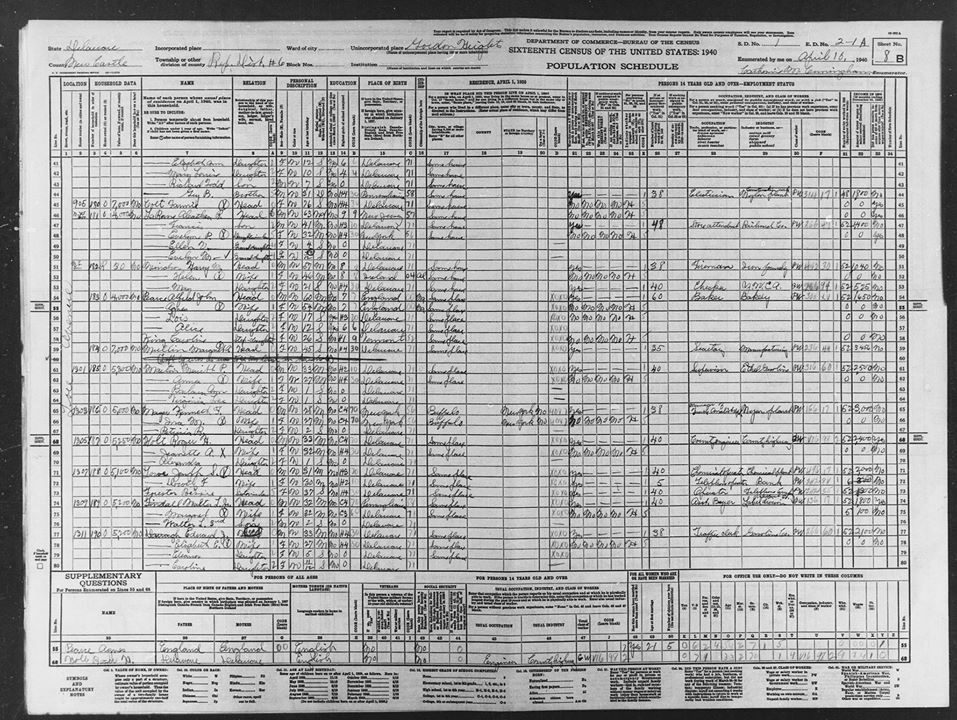 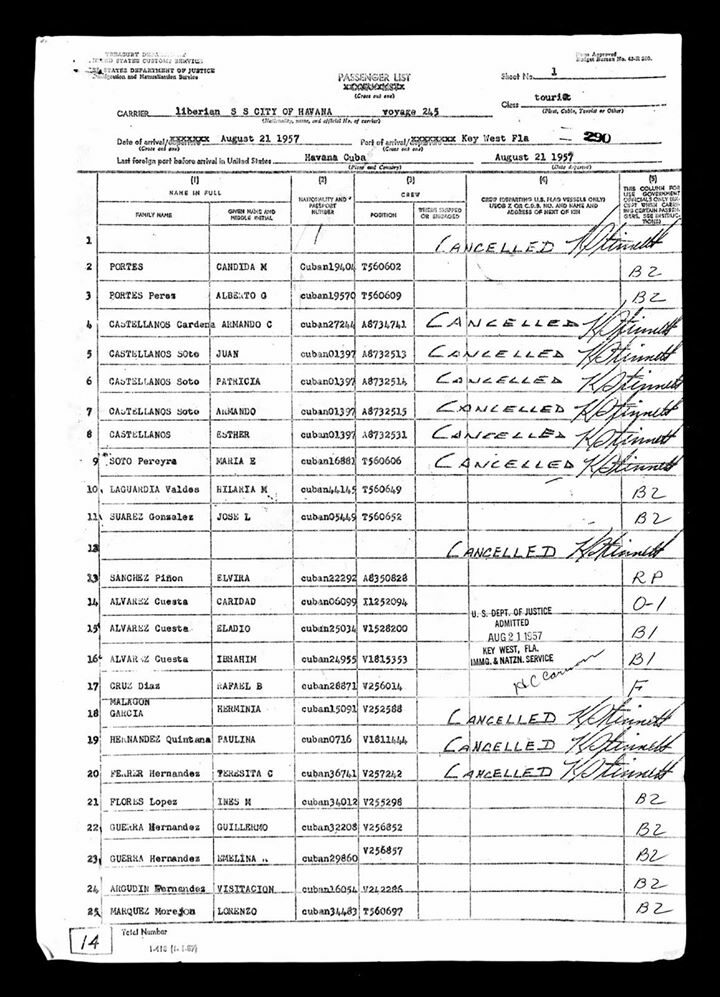 Rafael B Cruz Diaz, Passport #28831, Immigration & Naturalization Service, Key West, FL, Admitted Sept. 15, 1959 STUDENT 1958 – Eleanor and Alan Wilson move to London, London, England 1958 – 1966 Eleanor Elizabeth Darragh Wilson allegedly becomes a British Subject (Ted Cruz has sealed his mother Immigration/Naturalization, and Passport records) But on Michael Wilson’s birth certificate she is listed as a “non-citizen” 1959 Julia Garza filed the application for marriage record 11/15/1996. Rafael Cruz filed to divorce his first wife 1996. Rafael and Julia were married 37 years. 1961 Rafael B Cruz graduated University Texas, Austin, with a degree in Mathematics. 1961 Rafael B Cruz is granted political asylum and was given a green card. “A green card is allowed to reside and work in the United States, without becoming a citizen of the United States, in this case, under political asylum from Castro’s Cuba. Rafael Cruz’s citizenship status was that of a Cuban national living and working in the United States, under a green card work permit. According to U.S. laws, the green card holder must maintain permanent resident status, and can be removed from the United States if certain conditions of this status are not met.” 1961 Rafael B Cruz first daughter Miriam Ceferina Cruz born (11-22-1961-Died 2011) 1962 Rafael Cruz moves to Dallas, TX, after his second daughter Roxana Lourdes Cruz born (11-18-1962-Living). 1962 – Alan Wilson files for divorce 1963 – Divorce final London, London, England 1963 – Rafael B Cruz works for “Fair Treatment for Cuba” handing out “Hands Off Cuba” flyers. 1963 – Rafael B Cruz works for “Fair Treatment for Cuba” handing out “Hands Off Cuba” flyers.

Aug. 16, 1963 New Orleans, LA, Rafael B Cruz photographed handing out “Hands Off Cuba” flyers 1964 Rafael B Cruz moves to Calgary, Alberta, Canada, allegedly find work in the Oil and Gas Industry. (I believe in November 1964, Rafael B Cruz flees to Canada in fear of arrest because of his work with Fair Play for Cuba in New Orleans, LA. I believe it was at this period that Rafael Cruz abandons his wife Julia and 2 daughters. Leaving them behind Louisiana. There is no recorded of his wife Julia and 2 daughters Miriam and Rozana entering Canada.) 1964 The Cruz resides in Canada for the next eight years. “I worked in Canada for eight years,” Rafael Cruz says.“And while I was in Canada, I became a Canadian citizen.” – (From an interview with NPR” 1966 – Now single Eleanor Elizabeth Darragh Wilson gives birth to a son, Michael Darragh Wilson, DOB June 17, 1966. (Eleanor E. D. Wilson is listed as “non-citizen”) meaning she was not a British Subject. Eleanor Darragh Wilson places the newborn up for adoption and returns to the United States. Moving in with her sister Caroline in New Orleans, LA. The information obtained from American Embassy, London, England Oct. 2, 1967 “Report of the death of an American Citizen.” is as follows: Michael Wilson born UK June 17, 1966 Died Dec. 7, 1966 at 5 months at Hospital of Jt. John and St. Elizabeth, St. Marylebone, London. Certified by G. Thurston, for Inner West, London, of Acute bronchitis. After post morterm without inquest (without inquest means no investigation into death.) NOTICE: Was sent to Mrs. Eleanor Darragh Wilson, c/o Caroling Jackson, 3219 46th St. Meteric, LA, Mr. Alan Wilson 38 Courtfield Gardens S.W. 5, London. Deceased included mother’s passport #Z598584 issued in London 10-3-66. (This passport number is invalid) 1966 – Michael Darragh Wilson dies December 7, 1966, London, London, England. (Alan Wilson has stated he was not the father of Eleanor’s son Michael. Alan Wilson was married 2 more times and never had children.) 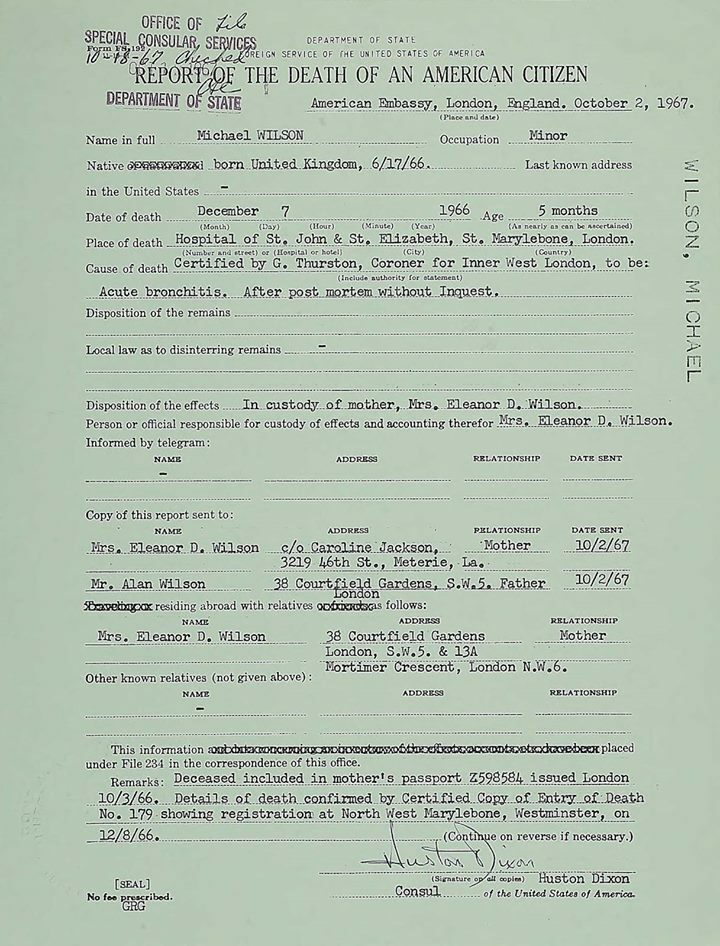 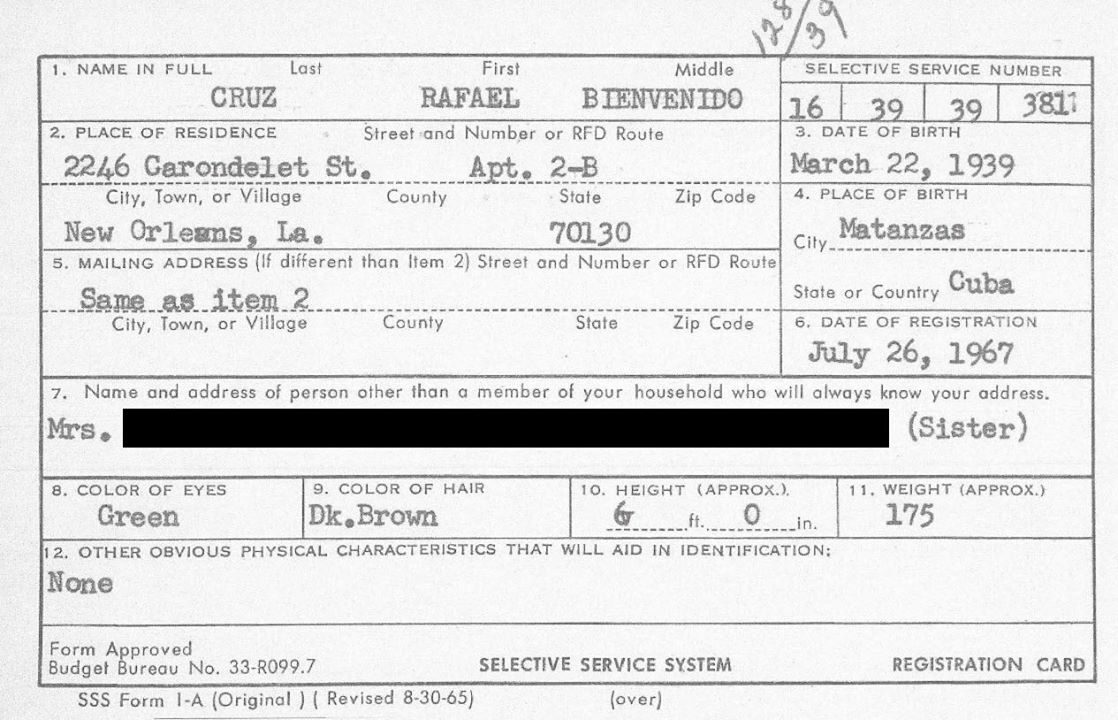 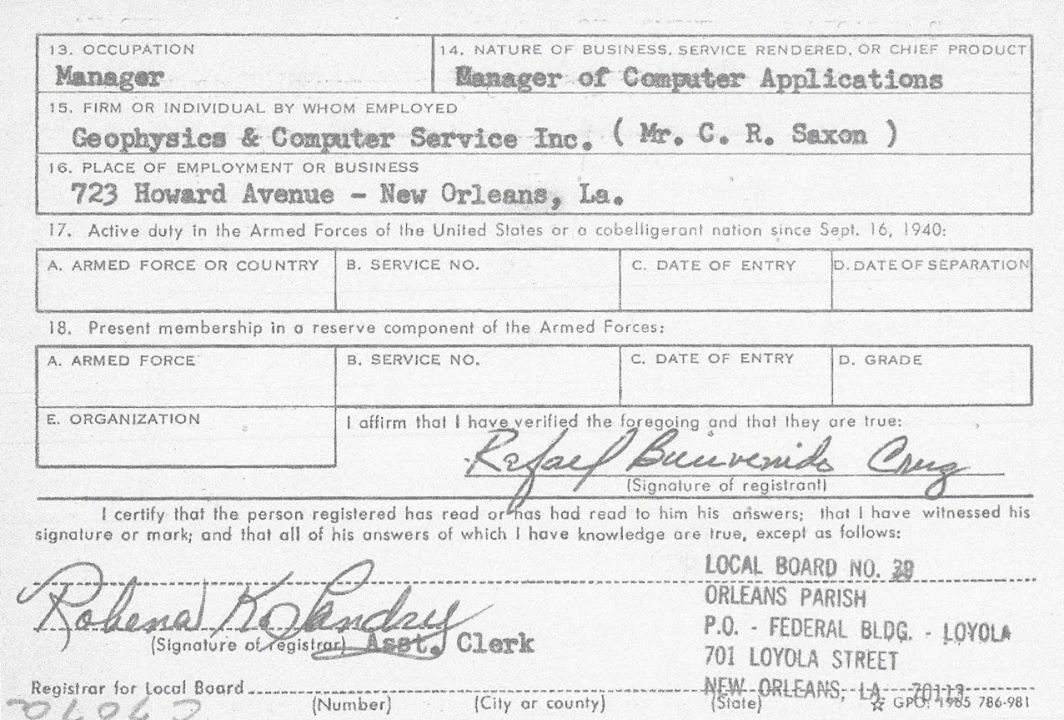 Rafael Edward Cruz born Calgary, Alberta, Canada Dec. 22, 1970 1970 If Eleanor Elizabeth Wilson was still a US citizen when Ted Cruz was born, she was required by law to go to the US Embassy and register Rafael Edward “Ted” Cruz’s birth at the United States Of American Department of State Consular Office and make a Report of Birth Abroad. She did not and Ted Cruz did not do so before his 18th birthday. If you fail to file a Consular Report of Birth Abroad before your 18th birthday the window of citizenship closes. 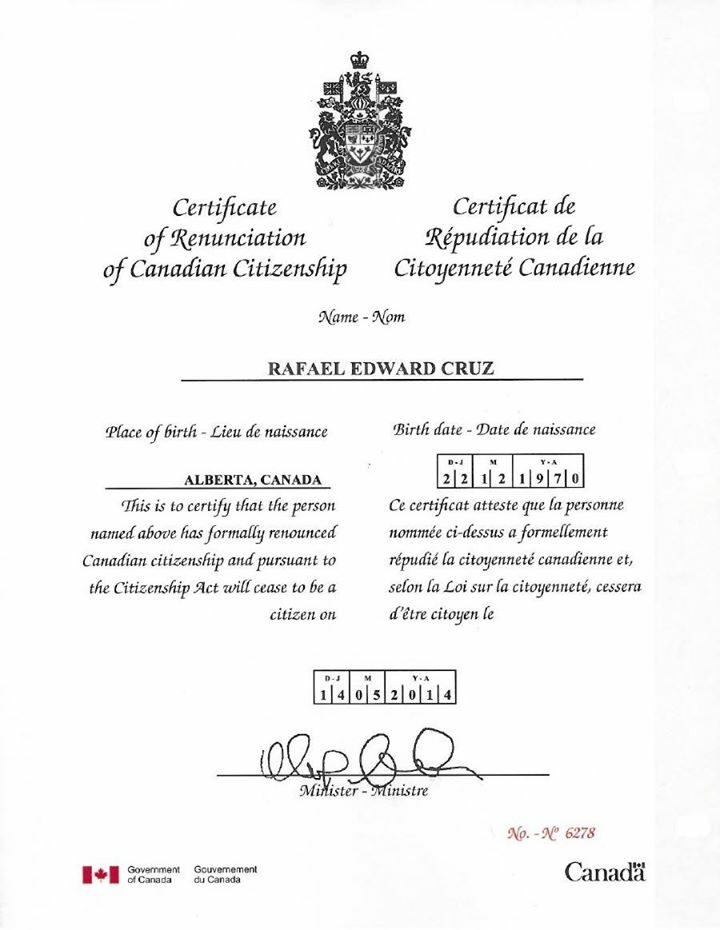