Could Attorney General Eric Holder Have A Perjury Problem?

Under oath last week, Attorney General Eric Holder testified before Darrell Issa’s House Government Oversight Committee that when it comes to trying ” to prosecute the press for the publication of material” he has “never been involved in, heard of” such a thing.

“First of all you’ve got a long way to go to try to prosecute the press for publication of material,” Holder said. “This has not fared well in American history… In regard to potential prosecution of the press for the disclosure of material.
This is not something I’ve ever been involved in, heard of, or would think would be wise policy.”

Attorney General Eric Holder signed off on a controversial search warrant that identified Fox News reporter James Rosen as a “possible co-conspirator” in violations of the Espionage Act and authorized seizure of his private emails, a law enforcement official told NBC News on Thursday.

The disclosure of the attorney general’s role came as President Barack Obama, in a major speech on his counterterrorism policy, said Holder had agreed to review Justice Department guidelines governing investigations that involve journalists.

As it turns out, Holder not only heard of it, he personally approved it.  The warrant in the Rosen case specified that he was considered a potential suspect in the leak of classified material, the reason that the DoJ didn’t bother to follow the existing Watergate-era statute in coordinating the records request with Fox News.  And note that Holder’s testimony in this case wasn’t produced by some sophisticated perjury trap sprung by a Republican, but as a freely-offered representation to no particular question during the question period of a Democrat.

There is no other way to view this except as a lie.  Even if Holder wasn’t under oath, that would constitute a felony punishable by up to five years in prison.  It certainly should produce at least a resignation, and almost assuredly would require the appointment of a special prosecutor, especially since the next person down in the organization, James Cole, is suspected of doing the same thing with reporters.

However, some have asserted Holder was not under oath. Townhall’s Guy Benson provides photo evidence that Holder was raising his right hand to testify and tweeted the evidence: 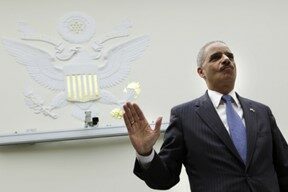 This seems to indicate that perjury is definitely an issue.

In addition Jennifer Rubin at the Washington Post reached the same conclusion:

First, the affidavit (paragraph 45) asserts that DOJ exhausted all means available to get the material from Rosen’s e-mails and phone, and “because of [Rosen’s] own potential criminal liability in this matter,” asking for the documents voluntarily would compromise the integrity of the investigation. Moreover, the affidavit asserts that the “targets” of the investigation (including Rosen) were a risk to “mask their identity and activity, flee or otherwise obstruct this investigation.” It is highly questionable whether Holder believed any of that to be true. (Really, he imagined a Fox News reporter would flee the country? He thought Rosen would don a disguise?) Was the affidavit a sort of ruse to get Rosen’s records (or later to pressure his cooperation)? Did Holder intentionally mislead a judge when he signed off on the affidavit? That is worth exploring.

Morrissey concludes, “I hadn’t thought about that, but RB is right.  Either Holder misrepresented the DoJ in a court filing, or he lied to Congress, and arguably he did both.  Either one should get Holder disbarred, at the least.”

Who Is It That Actually Supports The Obama Administration?