Council on Foreign Relations Declares War on Trump – Are His Days Numbered?

There will be no parades and no media shows which start out as… “we interrupt this broadcast to bring you this breaking news item…,” but the almighty Council on Foreign Relations (CFR) has spoken and they are endorsing Hillary Clinton, but mostly they have issued a position statement that Donald Trump must be stopped at all costs. 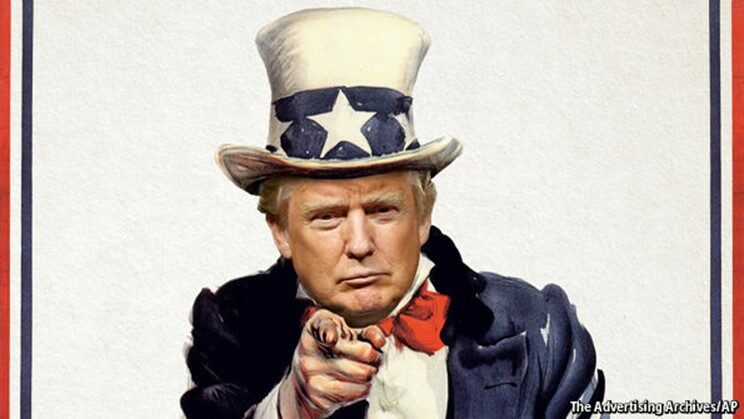 This is the caricature of Trump that ran in the mouthpiece of the Council on Foreign Relations, The Economist. Since when does the self-proclaimed righteous defender of the elite, founded by John Rockefeller, lower themselves to such blatant and childish mudslinging? They don’t, and this behavior is representative of a departure of tactics employed by the elite. And the fact that elite are approaching such a state of desperation, near-panic, if you will, all options are on the table. Again, I say, the elite are proclaiming that all options are on the table when it comes to the fate of Donald Trump.

Meanwhile, Hillary Clinton is their choice and has always been their choice to follow Obama into the White House, with her criminal behavior notwithstanding.

The Council on Foreign Relations is no longer a secret, as it once was, and this is who Hillary Clinton serves. Look at the background behind Mrs. Clinton. This is how the CFR gives tacit approval. No matter how criminal, no matter how long the trail of bodies becomes, the CFR is “all in” for their support of America’s modern day version of Lizzy Borden.

As an average American, anytime the CFR, or its first cousin, the Trilateral Commission endorses a candidate, no matter how subtle the endorsement, I assume it is opposite day and move in the other direction.

Do you know your CFR history? The CFR was the first “modern-day” globalist organization that arose in the early 1920’s when President Wilson was unable to convince the Senate and the American people that it would be a good idea to join The League of Nations, which arose out of the ashes of World War I.

The League of Nations, like its descendant, the United Nations, was designed to usurp national sovereignty from its member nations. The CFR was founded by John Rockefeller and they worked very hard at obscuring their existence in the media (whose top elite were members). Any talk of the CFR would have earned that person the original label of “conspiracy theorist”.

The main goal of the CFR is world governance and a one world economy that they control. The one world economy is taking shape and it is comprised of those people that Patrick Wood calls technocrats. I hope you are sitting down. These people are intent on owning all energy on the planet through unrealistic caps on our energy usage. Their system of carbon trading will reduce the lifestyles of the average person to about the 1870’s in terms of lifestyles, if we are lucky. Dehumanization and Depopulation are central themes of this approach. Pat Wood details this in his book Technocracy Rising.

Valerie Jarrett, who is really in charge of the White House?

The ushering in of these strict environmental regulations is why Obama is sitting in the White House. At some future date I will, in great detail, Obama’s connection to this group. Suffice for now, let’s just say that his original membership in the Joyce Foundation where Obama worked for Valerie Jarrett, now the senior-White House advisor is noteworthy. With the support of notables such as Al Gore, Warren Buffet and George Soros, the Joyce Foundation morphed into the intended carbon trading organization, The Chicago Climate Exchange.

Jarrett and Obama were unable to get the Chicago Climate Exchange to a position of prominence because Obama was unable to advance his complete Climate Change initiatives, to any degree, through the Congress. Later, Justice Scalia, was the swing vote on the Supreme Court that was standing in the way of Obama making his Climate Change initiatives law through executive branch fiat. And I am compelled to point out, where is Scalia today? This is a dire warning for Donald Trump.

When the smoke clears, Obama may not get his entire package codified into law. However, that is why the CFR has Hillary Clinton. At stake, is the world economy. The elite power structure of the CFR is in charge of the smart grid, and ultimately the use of all energy on this planet including the world’s new economy, carbon trading, the new global currency. Under this system, all debts will be forgiven because the people will be left with nothing when the bank runs, the bail-ins and the absolute collapse of the dollar takes place.

This is the most important Presidential race in our history because of the specter of technocracy. If Hillary secures the White House, the elite in the CFR are going to get exactly what they want, absolute power over the planet and with that, the complete power over who lives and who dies.

Let’s take a look at the CFR’s condemnation of Trump and their de facto endorsement of Clinton so there can be no doubt as to the accuracy of what I am speaking about.

Relevant Excerpts From The CFR’s The Economist

…the Republican nomination could be all but over. Donald Trump has already won three of the first four contests. On March 1st, Super Tuesday, 12 more states will vote. Mr Trump has a polling lead in all but three of them. Were these polls to translate into results, as they have so far, Mr. Trump would not quite be unbeatable. It would still be possible for another candidate to win enough delegates to overtake him. But that would require the front-runner to have a late, spectacular electoral collapse of a kind that has not been seen before. Right now the Republican nomination is his to lose…

With the statement the CFR alarm was sounded. But there is more…

When pollsters ask voters to choose in a face-off between Mr. Trump and Hillary Clinton, the Democratic front-runner wins by less than three percentage points. Mr. Trump would have plenty of time to try to close that gap. An economy that falls back into recession or an indictment for Mrs Clinton might do it for him.

That is an appalling prospect. The things Mr. Trump has said in this campaign make him unworthy of leading one of the world’s great political parties, let alone America. One way to judge politicians is by whether they appeal to our better natures: Mr. Trump has prospered by inciting hatred and violence. He is so unpredictable that the thought of him anywhere near high office is terrifying. He must be stopped (Editor’s Note: Stopped at all costs?).

This last statement is a declaration of war by the self-appointed elite in this country and this is so reminiscent of what happened to Bobby Kennedy.

When one is losing an argument, they resort to name-calling and that is what we see here where the power-brokers are so desperate that they resort to infantile name calling, taking quotes of out of context and engaging in the worst type of yellow journalism. There’s more…

,,,hinted that Antonin Scalia, a Supreme Court justice, was murdered (Editor’s Note: He was murdered); proposed banning all Muslims from visiting America (Editor’s Note: Trump stated that all immigrants should be screened, a sentiment embraced by most Americans with common sense).

What is the fate of all effective reformers.

When the Council of Foreign Relations declares war on an individual, history shows (e.g. JFK, RFK, MLK, et al) have a short shelf-life. One can only imagine how John F. Kennedy felt when he knew that the interlocked and combined forces of the Federal Reserve, the oil industry and the military industrial complete were closing in on him. Donald Trump is in a very similar position.

This is often the fate of those who would date to buck the CFR power elite. I liken Trump and his future to Larry McDonald than I do John Kennedy. I see it ending the same way.

I do not want to end this article on a note of doom and gloom. Those of who work in the Independent Media know that if you are going to be on the list, you better be on the top of the list. Right now, placing extreme attention on the topic of Trump’s safety, is the best way to keep him alive until Election Day.

Article reposted with permission from The Common Sense Show.

Constitutional Sheriffs Who are Protecting Liberty

How America Will Beat Washington DC

How America Will Beat Washington DC