Create Your Own AR-15 Semi-automatic Pistol at Home Legally

Yes this is going to sound like something out of the latest Mission Impossible film, but it’s a reality. A user by the name of “HaveBlue” constructed the lower receiver of an AR-15 using a 3D printer. The lower receiver is the section of the weapon that is considered the “firearm” as also has a serial number affixed to it, should it be purchased alone or complete with upper. You could call this a “home brewed AR-15,” and it will definitely get under the skin of gun grabbing liberals like Michael Bloomberg.

What’s interesting is that the lower is made out of ABS plastic. The design called for steel so HaveBlue had to reinforce some of the areas of the firearm. He then printed the design to an older model Statasys 3D printer and used a conversion kit for a .22 pistol.

While some said the part would fail and could cause him serious injury, HaveBlue put the unit to a test, firing some 200 rounds with no problems. He then stepped it up a notch and added a full metal upper and shot some .223 rounds. His design has held up well and shows no sign of major wear.

Making guns yourself is not illegal as long as you don’t sell or distribute them.

Oh I’m sure the libs are going to have a hay day with this one! As for those of us who are conservative and love the Second Amendment, the 3D printers have serious potential for us to guard our Second Amendment rights well into the future.

With technology advancing the way it is, the cost of these kinds of printers will obviously become less and less expensive. Guns are no the only possibility with these devices either. Tools, skeletal implants and all kinds of prototypes can be manufactured relatively cheap.

While this is not the first 3d printed gun part, it very well could be the first one that has been made into a fully working firearm.

So what is the result? 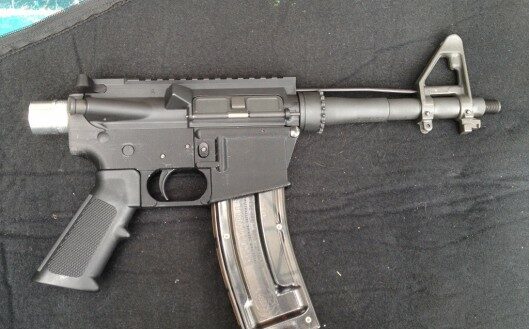 Pretty nice, if I do say so myself!

Self Defense is Biblical

Self Defense is Biblical