In November 2013 we learned that Bitcoin was built on technology the NSA had developed. The original source was deleted from an interview conducted that month and, unfortunately, is now lost to history – it doesn’t change the facts. Now we learn that information was 100% spot on correct. The NSA developed blockchain technology and released the information in a white paper that has been uncovered by Ken Schortgen, Jr., The Daily Economist. This confirms what has been reported by very few people, including us here at The Daily Coin.

Over the past several months I have stated, and plenty of people have attacked me for even thinking, much less stating, that cryptocurrencies will either be outlawed or overtaken by central banks. ALL – repeat – ALL of the banksters, government and military power and control comes from the Federal Reserve Note and people have this misguided belief that since someone developed a new math equation the banksters are going to roll over and simply hand over ALL their power and control.

Not only have I been discussing these issues, the research I put into a three part series detailing all the criminal banksters, government and other scum circling cryptocurrencies, should’ve been enough to garner at least a question or two. Why has no one been questioning all these banksters, governments and others becoming so involved with blockchain and Bitcoin in particular? Even Blythe – the queen of financial weapons of mass destruction – Masters left JPMorgan to develop a cryptocurrency, but still no alarm bells.

Japan and Australia have both legalized Bitcoin as currency. Japan would chop off half the island if the U.S. told them to and Australia is nothing more than a larger land mass of Japan – both lapdogs to the deep state pulling the strings within the U.S. government. Can you say grooming, training and assimilation? I feel confident some of you can.

Now, Ken Schortgen, Jr, has brought the goods to the table and anyone willing learn what has been known for several years can now learn for themselves. “The Phoenix” is definitely rising, probably in 2018 just as the Rothschild owned The Economist magazine stated in 1988. I just don’t think it is something any of us should be celebrating.

Is Bitcoin and other cryptocurrencies the result of a government experiment imagined 12 years before Satoshi white paper? by Ken Schortgen, Jr. – The Daily Economist

Is it coincidence or irony that the now famous Satoshi white paper that started the cryptocurrency industry was published during the very month of the financial crisis that many analysts believed was sufficient enough to take down the entire economic system?  Because certain documents uncovered from the NSA going back to 1996 may point to a correlation between the government and Bitcoin, and how the current cryptocurrency frenzy might possibly be an experiment for the future of government controlled money. 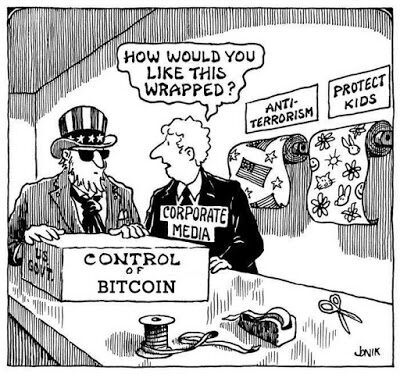 Of course many Bitcoin evangelists will simply ignore this possibility, especially since they are integrally staked towards the success of this and other cryptocurrencies.  But all one has to do is look at Al Gore and his monetary ties to the pushing of man-made global warming and the desire to see money become nothing more than carbon credits to realize that to find the truth of any given matter, one must always follow the money.

So with this in mind, what possible evidence is there that Bitcoin and the concept of cryptocurrencies may be either driven by the government as a mechanism to eliminate cash, or as a platform to provide a new system altogether that replaces sovereign fiat currencies?

In 1996 the NSA (that’s right, a government agency) published a White Paper titled, HOW TO MAKE A MINT: THE CRYPTOGRAPHY OF ANONYMOUS ELECTRONICCASH.  And in this white paper, analysts and researchers laid out the entire breadth and scope of replacing cash and other fiat currencies with a completely digital one, based on anonymous cryptocurrencies.

And they did this 12 years before the anonymous ‘Satoshi Nakamoto’ published his/her White Paper on the very eve of the financial collapse.

What is also interesting when you do a Word Cloud of the information compiled in the 1996 NSA document, is that the words Bit and Coin(s) occur in the most frequent 300 words of the search.

Cryptocurrencies in general should be considered as public enemy number one to central banks and sovereign governments, but so far there has been only a modicum of resistance to their creation and implementation.  And in instances like Japan, they are readily becoming accepted into their economies and monetary systems.  Yet make no mistake, if something threatens the sovereignty of a nation’s money, history shows that governments have been quick to destroy it before it has the potential to compete or threaten their own controlled legal tender.

Only time will tell if the Satoshi White Paper and the advent of Bitcoin in October of 2008 was simply a coincidence and perfect timing when the world was on the brink of monetary collapse, or if this anonymous publication and creation was meant to be engineered all along by the very entities that cryptocurrencies seek to overthrow.  Because this would also mean that the resignation by J.P. Morgan’s Blythe Masters in 2014 to create a new startup for blockchain technology was also a coincidence, as is the cryptocurrency engineered by the Federal Reserve to one day soon function in the capacity of global bank settlement.

Of course, I will be attacked for publishing this piece and I’m okay with that. What concerns me is the number of people that have recently jumped on the cryptocurrency bandwagon and have been singing the praises of this digital nightmare. If you think the banksters, government and military have control now, just wait until your entire family history – I mean entire family history – is uploaded and tied to your financial and economic account on the blockchain. We should all be extremely concerned and questioning the entire lay of the land in this “brave new world” instead of jumping for joy because Bitcoin “hit a new all time high”.

This is an email that I received earlier today – along with my reply. The name of the person is not included to protect their identity.

As I recall you are associated with Kranzler who runs a gold fund. I managed to read his column one day in which he inserted the following remark in his comments section: “I just took a dump and wiped my ass with the American flag.” Whenever I see his name now I am reminded of that image. So good luck with getting real information there.

I would encourage you to do some further research into the sheer amount of gold extant. There is a massive supply of off the books gold which stands ready to be used at any time to control the market. This appears to be an unimportant fact to gold promoters but might matter to investors. In addition, precious metals will not be mined in the future but easily made. As a result, many of us who previously bought precious metals are moving to the blockchain because controlled as it may be, there is money to be made on the ground floor.

These childish and superficial podcasts and articles are not helping people but I guess they keep you guys in business…for a little while longer.

I will address the comment made by Kranzler you mention below. I’m not one for those types of remarks either and have been disassociating my work and my life from that type of nonsense.

Never have I once said or eluded to “getting away” with anything. Everything I have, I earned and simply want to keep it. I have never once ask the government for anything – never have, never will. The only thing I want from the government – addressing your “free lunch” question – is what they have stolen from me and my family. Social Security and taxes are income that I have earned, legally, and reported as the law requires. Will the government give me what I am owed? Yeah, right – I’ll hold my breath on that one.

blockchain and Bitcoin in particular – if you use bitcoin for everyday transactions, great, then you use it as a currency, if not, then it is nothing more than a speculative bet. I have been against Bitcoin and cryptocurrencies as this will be the tool used to further enslave humanity. If you think making a profit off enslavement is a positive for society that is your belief, not mine. Personally, I don’t see it as being any different than being involved in the heroin trade – yes, you can make a lot of profits off other peoples misery – no thanks. 401k’s, IRA and pension plans everywhere are used to as the drug money laundering mechanism for the heroin trade, which is one of the reasons I am not involved with any of those type of investment vehicles either and have discussed them endlessly at The Daily Coin.

If you see what I am doing as childish that is your filter – it is, fortunately, not shared by very many people. I take the work I do very seriously and do the best I can with the information presented. Now that you know that Bitcoin and blockchain technology are part of a larger picture of enslavement what will you do with that information? Will you make investment decisions based on this new information or will you continue to play along and assist in the enslavement?

At the end of the day, we all have to make decisions based on our individual needs and circumstances. I am not offering investment advice, never have, never will, as I am not an investment advisor. I only report what is available and can be verified. The investment decisions I make for me and my family are based on what I have learned over the past 9 years and based on our needs. We have stopped supporting any of the too big to jail banks, we shop local as much as possible – which is about 90% of all our goods and services – we make investment decisions based on what will be best for us and our community. If everyone else took this same approach there would be no need for an NSA developed Bitcoin that gathers your entire life history and ties it to your financials. But, people want their profits at any cost, just ask the banksters.

Once again I appreciate you sharing your thoughts and hope that you find the work I do to be of value to your and your family.

“Reality” Manipulated in Real Time: This Technology Manipulates World Leaders to the Point Where You will never trust Mainstream Media Again!

VA Secretary: My Only Clinical Priority Is Decreasing Vet Suicides

VA Secretary: My Only Clinical Priority Is Decreasing Vet Suicides