CT Cop to Gun Owning Patriot John Cinque: “I Cannot Wait to Get the Order to Kick Your Door In”

Last weekend, I reported on Connecticut John Cinque’s 2013 warning to lawmakers that he would not comply with their attempts to force the citizens of Connecticut to register their semi-automatic weapons and high capacity magazines. Since that time, the video, though a year old, has gone viral. However, in a recent video between Mr. Cinque and Connecticut gubernatorial candidate Joe Visconti, Cinque reveals that a Branford, Connecticut police officer told him, “I Cannot Wait to Get the Order to Kick Your Door In.”

View the video in its entirety here.

Cinque was explaining last year’s account to Visconti. Specifically he referenced a phone conversation with Connecticut State Representative David Yaccarino. In that questioning, Cinque said that the thing that really stuck with him was the fact that when he asked Yaccarino why there was a Second Amendment, he responded that it was put in place so that the Colonists could attack the British. No, seriously, that is what was said. Never mind that the Second Amendment was written long after the Revolutionary War.

Yaccarino finished the conversation with Cinque and then the phone was hung up, and Cinque was determined to go to the meeting (you can see the video of his comments here if you missed them).

According to Visconti, Governor Malloy’s signing the gun registration bill, was what got him in the race for governor. “I got into the race April 4th, as the governor was signing the bill, because for me, it was the last straw,” he told Cinque.

Cinque was asked how he felt as well.

Mr. Cinque was angry over the fact that these elected officials were claiming that they did great things for the citizens of Connecticut and saved their rights, when he believed what they were doing was violating their oath of office.

Both representatives are Republicans. “I’m a Republican,” Cinque said in response to Visconti’s affirmation that he also is a Republican.

“But I don’t trust the Republicans either, at the state or the federal level,” Cinque continued. “This whole Progressive movement has bitten everyone, and that’s what it comes down to.”

Visconti interjected that it hasn’t bitten everyone, affirming that it had not bitten him, and Connecticut gun owners seem to agree with him. Visconti not only wants to fight the current gun law, but the entire progressive agenda. “What are we gonna do about this gun law in Connecticut, because they are not going to stop?” he asked.

When asked what Cinque thinks will happen, he said, “Well, if the governor is re-elected, it’s gonna be uh….not just on the Second Amendment…it’s gonna be a whole lot of changes. I have zero doubt they’re gonna go full speed ahead.”

Then he delivered the bombshell. “I can speak from my own experience, that the video that was posted….in which I said ‘I’m not going to comply’… and I stand by my words… I’ve had contact with a police officer in my home town…I live in Branford, and his words straight out were ‘I Cannot Wait to Get the Order to Kick Your Door In.'”

A call to the Branford, Connecticut Police Department simply led to me calling on Monday, which I will do, to speak to the Police Chief. Also, an email to John Cinque has not been returned at the time of publishing. The article will be updated with any new information.

John is among hundreds of thousands of Connecticut citizens who are exercising mass civil disobedience against not only a violation of their rights expressed in the Second Amendment, but also in the Connecticut State Constitution. They are not registering their weapons and they aren’t surrendering them as instructed. As has been pointed out by a Cuban immigrant to America, gun registration is the step immediately before gun confiscation. In fact, the man I’m referencing, Manuel Martinez’s son, contacted Freedom Outpost to reiterate that we should refer to all “gun control” legislation as a form of “gun confiscation,” which Cinque indicates that is exactly what is on the progressives mind, both Democrat and Republican.

This is what that people of Connecticut are up against. They are up against tyrants; tyrants that believe they are the master of the citizens, not the other way around.

God bless these patriots, and may He continue to grant them courage and victory in this desperate hour.

UPDATE: John Cinque spoke to Freedom Outpost on Sunday and provided the name of the officer. He will also be providing us with screenshots of the conversation in which the officer made the statements he did and we will be following up with Branford Police Department on Monday. This is about to get interesting.

UPDATE 2: I’ve reviewed the screenshots and have left a voicemail for the officer involved. Let me clarify the actual statement the officer provided in the midst of a lengthy Facebook interaction.

“I give my left nut to bang down your door and come for your gun.”

The officer, Joseph Peterson, has served for many years and is a long time friend of John Cinque’s. Here’s the Screenshot of the conversation. I’ve highlighted the citation. 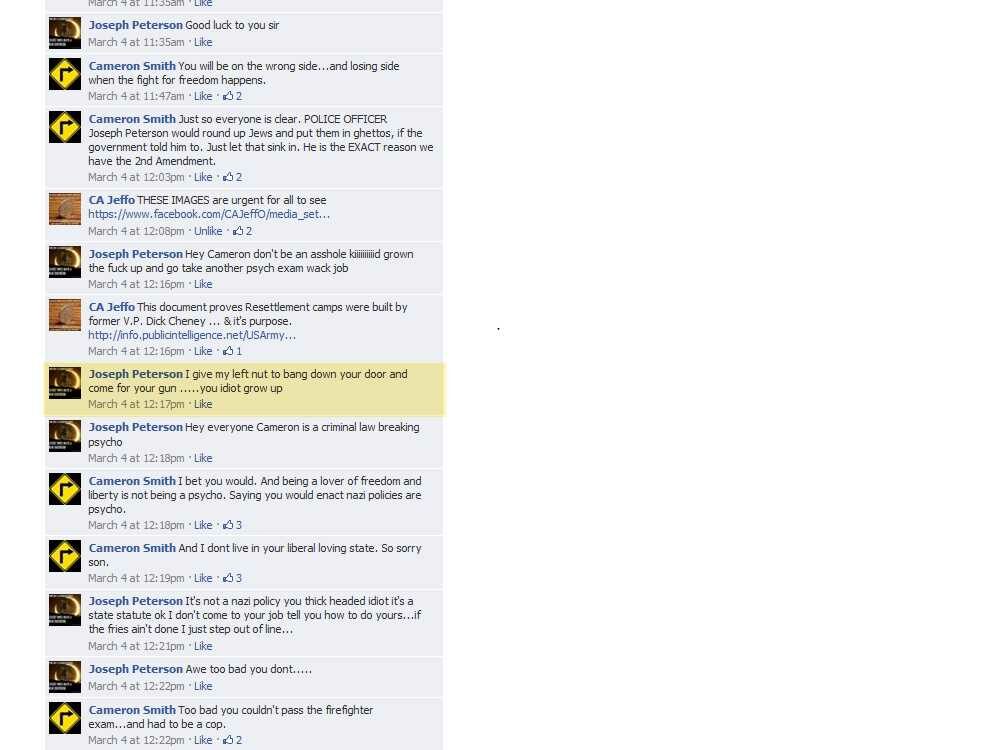 There are roughly 20 screenshots of the entire conversation. While many of the things the officer says are correct (that lawmakers are the real issue put into office by the people), his comments regards following laws merely because they are laws is quite disturbing and in many people’s minds, including the mind of this author, smack of the same defense that Nazis in Germany attempted to provide for doing what they did.