“Gun Confiscation” is a term that should strike fear into the hearts of criminals, not law abiding citizens. But that is exactly what certain states like New York, Colorado and California are attempting to do with “tough new gun control legislation laws.” It is no secret that the Obama Administration really, really wants to do the same thing on a national level. Imagine what could happen if that were to take place? That means only “government” would have any guns. Australia did exactly that, and crime actually rose.

Australian women are now raped over three times as often as American women.

In England, they have extremely strict gun laws, and they seem to be experiencing a rise in violent crime, as well. 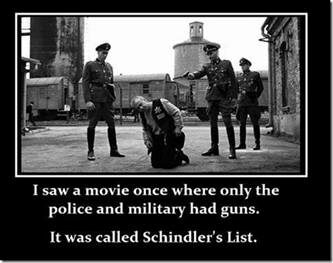 Simply put, this is how it starts. This is how a government becomes tyrannical, and the sad part about this is that you won’t be any safer because only the criminals and police will be the only people that are “armed.” This is just another example of how Democrats think the Constitution is just to wipe your backside with.

Back in 2010 my mother was dying of cancer. I had to sell all of my guns to be able to travel from Washington State where I live to Southern California, so I could be with her before she died. It wasn’t even a concern because I had to be with her. Now here it is 3 years later, and I can’t afford to purchase any more firearms because unlike our politicians in Washington D.C., my wife and I live on a tight budget. For the first time in my adult life, I am un-armed, and this is the one time in history where I wish I wasn’t.

In Seattle, Mayor Mike McGinn is trying to do something similar but is restrained by the courts, we have open carry laws in Washington State. So what he is doing is, he is trying to convince business owners in Seattle to join his “Gun Free Zone” campaign. Thereby prohibiting patrons of businesses to carry firearms in stores where “Gun Free Zone” stickers are in the windows. Well, what can one expect from this idiot? He’s a Democrat from New York.

It is really quite frightening to me to see all these end-runs around the Constitution, but when only “Government” has the guns…that is tyranny.

Yes Virginia, There is a “Kind of God” – At Least That's How Harrison Ford Sees It

Smart Growth: The Liberal Policy That May Kill Us All

Smart Growth: The Liberal Policy That May Kill Us All