Democrats and others on the left always amaze me. They rarely refer to the Bible at all, but when they do, it’s always in an attempt to show that either the Bible, Jesus, or both represent socialism.

Republicans want to strip food stamp funds from the farm bill, preferring to deal with it and the fed’s Supplemental Nutritional Assistance Program (SNAP) separately. Sounds reasonable. Democrats of course, are livid because they realize Republicans saw their subterfuge. Don’t you hate when that happens?

The Bible says a lot of things, most of which are completely ignored by most people. However, when it’s convenient, they have their “go-to” verses, which they pull out and use to thump people over the head.

Brown is referring to a passage in Luke 12, in which Jesus is speaking about the fact that His followers need to be ready at all times (Luke 12:35-48). Jesus talks about keeping our lamps trimmed and always being on alert. He also speaks about the head servant who starts to doubt the return of the Master of the house and because he does, he starts abusing the other servants. Verses 45-46 state, “But if that slave says in his heart, ‘My master will be a long time in coming,’ and begins to beat the slaves, both men and women, and to eat and drink and get drunk; the master of that slave will come on a day when he does not expect him and at an hour he does not know, and will cut him in pieces, and assign him a place with the unbelievers.”

In essence then, this slave knew a great deal, but chose to ignore that truth and live as he pleased. He treated others reprehensibly. Because of it, he also will be cast out with “unbelievers.” Why? Because in essence, he was an unbeliever himself, merely parading himself as someone who was truly “saved.” Jesus continues by stating, “And that slave who knew his master’s will and did not get ready or act in accord with his will, will receive many lashes,” (verse 47). The obvious inference here is that Jesus is speaking of a person having a good deal of knowledge, not material possessions (as Corrine Brown believes). This is what happens when someone simply rips verses out of their original context.

Jesus does say in verse 48 the following: “but the one who did not know it, and committed deeds worthy of a flogging, will receive but few. From everyone who has been given much, much will be required; and to whom they entrusted much, of him they will ask all the more.” In other words, Jesus said that the person who knows the truth and in spite of that knowledge, lives as if he does not, will not only find himself punished, but will have the things he had taken away and given to someone else.

Jesus is not saying here that the servant is supposed to share his material possessions or else. Jesus is saying that the servant is obligated to live a life that is in keeping with the truth…or else. If that servant does what he is supposed to do, then all will be well and he will NOT lose the possessions he has. However, if he does NOT live according to the truth, Jesus says that servant WILL lose what he has. It’s simple really.

A far better section of Scripture to use when discussing government handouts is found in Paul’s writings, 2 Thessalonians 3 to be exact. Here, Paul clearly outlines a principle that should apply to the United States and all governments. Instead, we have bleeding heart liberals like Corrine Brown who make a mockery of God’s truth and create slaves in the process.

This section of Scripture really spells things out for anyone who is paying attention. Let’s look at it.

For you yourselves know how you ought to follow our example, because we did not act in an undisciplined manner among you, nor did we eat anyone’s bread without paying for it, but with labor and hardship we kept working night and day so that we would not be a burden to any of you; not because we do not have the right to this, but in order to offer ourselves as a model for you, so that you would follow our example. For even when we were with you, we used to give you this order: if anyone is not willing to work, then he is not to eat, either,” (2 Thessalonians 3:7-10; emphasis added).

It’s pretty straight forward. Paul says that even though he (as an apostle) had the right to go to the Thessalonian believers and eat their food without paying for it, he chose not to do this. Why? Because he did not want to be a burden to those believers. Paul ends this section with the statement “if anyone is not willing to work, then he is not to eat, either.”

By the way, this last statement applies to people who do not want to work. It does not apply to people who are unable to work. There was tremendous laziness, even in Paul’s day and that laziness exists today, largely because our government encourages it. The federal government believes that putting more people on welfare is beneficial, but for whom? It creates two problems. First, it creates more laziness, and second, it creates greater hardship for those who are working and have to pay increasing taxes to support those who don’t work and expect a handout. 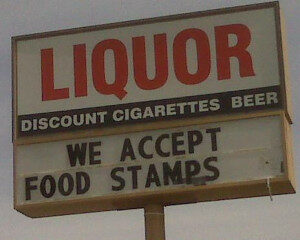 Welfare should also be used to keep a person from starving. Yet, today’s welfare allows people to buy liquor, hair braids, lap dances, and much more.

Like most on the left, Democrat Corrine Brown has it wrong and I resent the fact that she has misused Scripture to make it say something it does not say. She will be judged by God Himself on the way she has misappropriated Scripture. Welfare should be used by those people who are truly unable to work, or for short periods of time. It should not be a way of life passed down from one generation to the next. That is nothing more than theft.

Why Collectivism is Always Poised to Win

Why Collectivism is Always Poised to Win