Democrat Senators: Your Smart TV May Be Spying On You

If you remember George Orwell’s 1984, and how Winston was constantly being monitored via television screens and surveillance cameras, then you probably are also aware of how smart TVs are capable of doing similar things along with being able to track what you view and interact with.  A letter penned by two Democrat senators is calling on the (Federal Trade Commission) FTC to investigate the privacy policies and practices of smart TV manufacturers.

The letter was written by Democrat US Senators Edward Markey (D-MA) and Richard Blumenthal (D-CT).

The letter, which was sent on July 12, 2018, was written to “express… concerns about the consumer privacy issues raised by the proliferation of smart TV technology.”

The letter reads in part:

Many internet-connected smart TVs are equipped with sophisticated technologies that can track the content users are watching and then use that information to tailor and deliver targeted advertisements to consumers.  By identifying the broadcast and cable shows, video games, over-the-top content like Netflix, and other applications that users are viewing, smart TVs can compile detailed profiles about users’ preferences and characteristics.  recent reports even suggest that smart TVs can identify users’ political affiliations based on whether they watch conservative or liberal media outlets.  This information about consumers’ viewing habits, by itself or in combination with troves of additional personal data collected online and across other devices, allows companies to personalize advertisements based on detailed dossiers of individual users.  Advertisements can then be sent to customers’ computers, phones, or any other device that shares the smart TV’s internet connection.

While many users are not aware of how this information is used to sell them products, the problem comes in that people want new technology and with that technology, we are opening ourselves up to certain losses of privacy to companies that we use.  That is just a fact, and we often agree to these losses of privacy to the company and third-party companies in contracts with make with those service providers.

I’m not saying I like it, I’m just saying it is a fact.

With that said, the senators want the content to remain private, which is something I would like to have also without being refused the service for which you are paying.

“The content consumers watch is private, and it should not be assumed that customers want companies to track and use information on their viewing habits,” the senators wrote.  “Any entity collecting and using sensitive information should comprehensively and concisely detail who will have access to that data, how that data will be used, and what steps will be taken to protect that information.  Users should then be given the opportunity to affirmatively consent to the collection and use of their sensitive information, while still having access to the core functions of smart TV technology.”

The irony here is that, as I said before, we often enter into a contract that states these things, but we don’t want to hassle with rejecting certain parts because of all the legal language we would have to trudge through in order to do so, and then we run the risk of not being able to use the service because we won’t agree to those terms.

On the one hand, it’s a private company, not government.  Still, consumers would like to be assured that their use of services is actually kept private and not distributed to other entities.

On the other hand, what people don’t know is that this information, once out in the open, makes it available to the government to use against you without a warrant.

Yes, you read that right.  How do I know?  It was used in the Oregon trial against the protesters through software developed by a CIA front group funded organization, Palantir.

Palantir claims to protect people’s privacy, but I reported on the truth of that claim in January of this year.

Palantir and its owners claim they are all about protecting the rights of the people from government surveillance.

However, The Intercept challenges this claim.

Despite all the grandstanding about lucrative, shadowy government contracts, co-founder Karp does not shy away from taking a stand in the debate over government surveillance. In a Forbes profile in 2013, he played privacy lamb, saying, “I didn’t sign up for the government to know when I smoke a joint or have an affair. … We have to find places that we protect away from government so that we can all be the unique and interesting and, in my case, somewhat deviant people we’d like to be.” In that same article, Thiel lays out Palantir’s mission with privacy in mind: to “reduce terrorism while preserving civil liberties.” After the first wave of revelations spurred by the whistleblower Edward Snowden, Palantir was quick to deny that it had any connection to the NSA spy program known as PRISM, which shared an unfortunate code name with one of its own software products. The current iteration of Palantir’s website includes an entire section dedicated to “Privacy & Civil Liberties,” proclaiming the company’s support of both:

Palantir Technologies is a mission-driven company, and a core component of that mission is protecting our fundamental rights to privacy and civil liberties. …

Some argue that society must “balance” freedom and safety, and that in order to better protect ourselves from those who would do us harm, we have to give up some of our liberties. We believe that this is a false choice in many areas. Particularly in the world of data analysis, liberty does not have to be sacrificed to enhance security. Palantir is constantly looking for ways to protect privacy and individual liberty through its technology while enabling the powerful analysis necessary to generate the actionable intelligence that our law enforcement and intelligence agencies need to fulfill their missions.

It’s hard to square this purported commitment to privacy with proof, garnered from documents provided by Edward Snowden, that Palantir has helped expand and accelerate the NSA’s global spy network, which is jointly administered with allied foreign agencies around the world. Notably, the partnership has included building software specifically to facilitate, augment, and accelerate the use of XKEYSCORE, one of the most expansive and potentially intrusive tools in the NSA’s arsenal. According to Snowden documents published by The Guardian in 2013, XKEYSCORE is by the NSA’s own admission its “widest reaching” program, capturing “nearly everything a typical user does on the internet.” A subsequent report by The Intercept showed that XKEYSCORE’s “collected communications not only include emails, chats, and web-browsing traffic, but also pictures, documents, voice calls, webcam photos, web searches, advertising analytics traffic, social media traffic, botnet traffic, logged keystrokes, computer network exploitation targeting, intercepted username and password pairs, file uploads to online services, Skype sessions, and more.” For the NSA and its global partners, XKEYSCORE makes all of this as searchable as a hotel reservation site.

You may say, “Tim, this is a private company, and you’re for entrepreneurship and capitalism, arent’ you?”

I absolutely am, but this isn’t just a private company.  It’s a government-sponsored company that was provided American tax dollars under a CIA venture capital group.  That right there should be a conflict of interest, especially considering that government agencies are now using the “products” of Palantir to go after innocent Americans, and yes, the Bundys and several others were acquitted of all the charges against them.

In fact, I learned of Palantir during a conversation I had with reporter Pete Santilli, who had all charges against him concerning the Malheur Wildlife Refuge protests dismissed.  Santilli told me he learned about Palantir because of specific information that came out in court of its use.

More than the feds, this technology is being used in police departments across the nation.

So, while I agree with the senators in that I would love for companies to keep our information private, I find it ironic that they aren’t saying a word about how the federal government is grabbing up bulk data on Americans from companies doing the exact same thing they are complaining about with smart TVs without a warrant.

Here’s a copy of the two-page letter sent on Thursday. 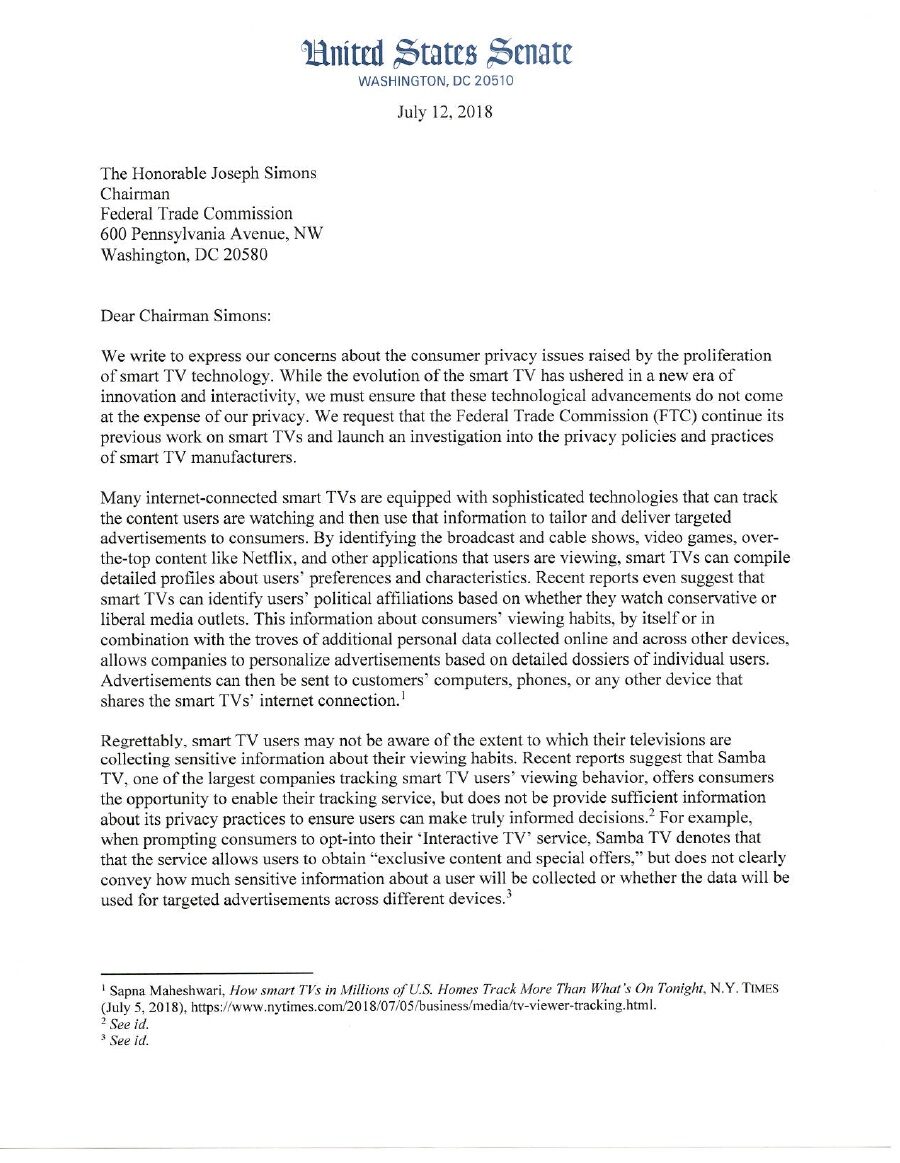 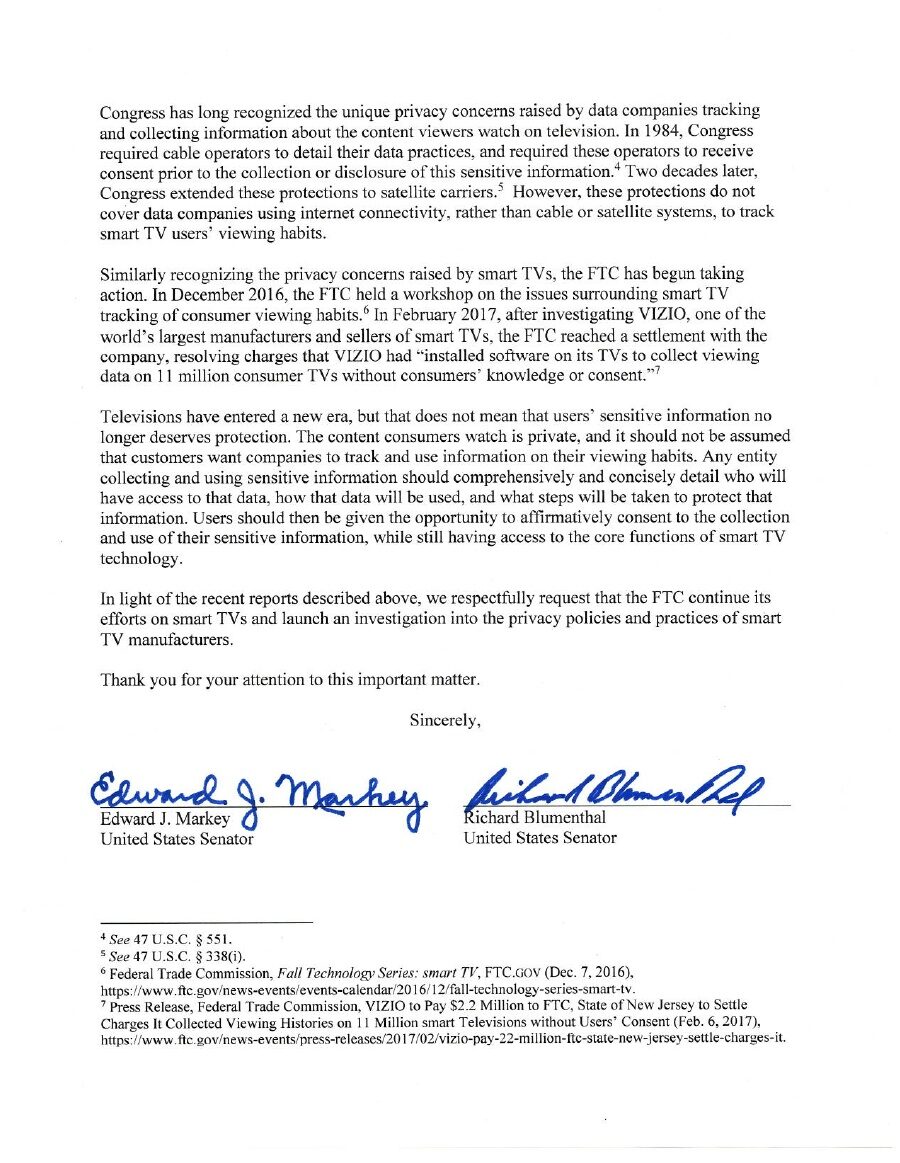 Congressmen: "Corruption At The Highest Levels Of The FBI"

Congressmen: "Corruption At The Highest Levels Of The FBI"