Dianne Feinstein: Difficult to Tell the Good Terrorists From the Bad

Senator Dianne Feinstein is warning the American public that “terror is up worldwide. The statistics indicate that. The fatalities are way up.”

Feinstein expressed concern for the “breeding ground” US foreign policy has created for terrorism and this fact makes it difficult “to separate the good guys from the bad guys.”

According to statistics from the 2004-2005 National Safety Council (NSC) report and the National Vital Statistics report for 2003 states clearly that when compared to dying in a terrorist attack, an American is more likely to die from: 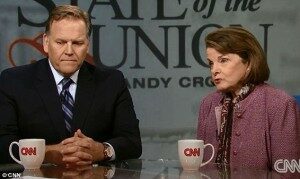 House Representative Mike Rogers explained: “What’s happening in places like Syria [is] that you have a pooling of Al Qaeda and affiliates . . . Groups have changed the way they communicate, which means it’s less likely that we’re going to be able to detect something prior to an event.”

The fear is a trend they have identified as terrorists using “smaller events [to] achieve their goals.”

Rogers maintains that the National Security Agency (NSA) was helping to reduce the number of threats to America before their surveillance programs were exposed.

However, with terrorists, according to Feinstein, have “new bombs, very big bombs, trucks being reinforced for those bombs.”

Feinstein claimed that there is “a real displaced aggression in this very fundamentalist jihadist Islamic community, and that is that the West is responsible for everything that goes wrong and that the only thing that’s going to solve this is Islamic Sharia law and the concept of the caliphate.”

In 2012, the Department of Homeland Security (DHS) placed a solicitation by way of the Transportation Safety Administration (TSA) for 700 pounds of High Density Ammonium Nitrate and 700 pounds of A-5 Flake RDX.

When creating a “makeshift terrorist bomb” ammonium nitrate is an integral ingredient.

In the solicitation , the DHS did not specify information that a corporation seeking to reply with a bid would need. In addition, DHS is requesting that high density ammonium nitrate and RDX (the required booster) be delivered to an undisclosed government facility in downtown Atlantic City, NJ.

Ammonium nitrate was used in conjunction with nitromethane racing fuel (which is essentially jet fuel) when the 7,000 pound truck bomb was created for the Oklahoma City bombing.

At the University of Rhode Island, Jimmie Carol Oxley , chemist and professor, works with the DHS on projects with her students to analyze IEDs from manufacturing to various “terrorist scenarios” that these diverse explosives could be used for.

Oxley has worked with many governmental agencies, such as the FBI, NSF, and National Academy of Sciences (NAS) National Research Council (NRC); as well as written over 80 papers on “energetic materials (explosives, propellants, pyrotechnics).

She has worked on law enforcement issues [with the FBI simulating the World Trade Center bombing (1993), with FEL examining large fertilizer bombs, and with ATF studying the behavior of pipe bombs]; however, her main research interest is hazard analysis of energetic materials.”

On a 2,200 acre site, Oxley and her students take IEDs constructed in the lab and detonate them to “see what happens.”

They use chemicals such as hydrogen peroxide to study how chemical additives can reduce or exacerbate the effects of a home-made bomb. Most of Oxley’s students go on to work for the DHS specializing in criminal and terrorist investigations.

In 2009, the Office of Intelligence and Analysis published a report entitled Rightwing Extremism , wherein domestic extremists, particularly white supremacists, were proposed to be the newest and most dangerous threat to the US since al-Qaeda.

While admitting that they had no definitive proof that “domestic rightwing terrorists are currently planning acts of violence, [however] rightwing extremists may be gaining new recruits by playing on their fears about several emergent issues. The economic downturn and the election of the first African American president present unique drivers for rightwing radicalization and recruitment.”

The DHS wanted to instill the idea that veterans were being recruited to become “right-wing extremists” upon returned from Iraq and Afghanistan.

Former Secretary of the DHS, Janet Napolitano, intimated that military veterans could become instruments of domestic terror. When Napolitano’s comments were met with public distain, the DHS amended their assertion that extremist groups were highly-marked; but rather it was a lone wolf type that would carry out the biggest act of domestic terrorism.

As the FBI reported in 2007 white supremacist groups are “relatively disorganized” and the “individuals acting alone” will be the most obvious threat as a more resourceful implementation of premeditated terrorist attacks.

Media has spun the propaganda perfectly by asserting that “the return of military veterans facing significant challenges reintegrating into their communities could lead to the potential emergence of terrorist groups or lone wolf extremists capable of carrying out violent attacks.”

Is Stewart Rhodes a Oathkeeper or Gatekeeper?

In 19 Minutes, A Team Of Snipers Destroyed 17 Transformers At A Power Station In California

In 19 Minutes, A Team Of Snipers Destroyed 17 Transformers At A Power Station In California