Dictatorship 101 & The Crisis in America

Have you ever heard the term “Dictatorship 101”? An unfamiliar term to many, this simple term was used by Glenn Beck to describe the path this country is taking. Beck breaks “Dictatorship 101” down into three phases: nudge, shove, and shoot. 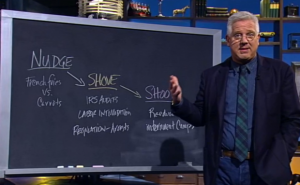 In the “nudge” phase, the government uses simple “incentives” to get people going down the path it wants. It might be something as simple as “Cash for Clunkers” or using anything to convince an individual to lean toward purchasing a hybrid.

The “shove” phase comes into play when the nudge phase is unsuccessful. A good example of this would be the IRS auditing of conservative organizations or delaying tax-exempt status to those organizations. It could also take the form of increases monitoring of citizens through the NSA, increasing the amount of regulations to arresting individuals whom the government perceives is out of line.

The last phase “shoot” typically occurs when the other two have failed. In this phase, individuals are either sent to internment or re-education camps or are shot.

Based on this breakdown, where is America today? One has to only look at the news to know that currently, we are in phase two – the shove phase. With the IRS and NSA scandals coming to light, the continued “shoving” of Obamacare onto a resistant public, passage of an immigration bill that would turn this country into a cesspool of debauchery, including the requirement of biometric ID cards, one can easily see the similarities of phase two right before our eyes.

This is a critical time in our nation’s history. Americans have the opportunity to stand together to inform this administration along with all their cronies that we are a free people and will not tolerate tyranny and despotism. What every American does within the next two months will shape our country for generations to come. Americans will either remain silent and march head downwards into oppression; or, Americans will stand up, be counted and demand our government be held accountable for their tyrannical, despotic, unconstitutional, oppressive, illegal, immoral, unethical and deplorable actions.

On October 11-13, 2013, truckers, along with concerned supporting American citizens, are scheduled to descend on Washington, DC. This display of patriotic peaceful demonstration to demand the government address the grievances of the American people is on behalf of all people, not just the truckers. The trucking community is willing to lead the way to address our government. Are you willing to stand with them?

Tune in daily to the Guerilla Media Network at 9 PM EST to the Pete Santilli hour with organizer Zeeda Andrews and General Lee. You may call in to the show at 218-862-9829 or direct comments to petersantilli.com/chat.

There is only seven days left to be prepared. All Americans who support this endeavor are encouraged to also go to Washington, DC. However, if you cannot go to DC, show your support by getting your supplies to last a few weeks before October 11, 2013, and plan to cease all monetary transactions for those three days.

Truckers are not the only group planning to protest in Washington. Freedom Outpost reported that groups against NSA spying are scheduling to descend on Washington, DC approximately two weeks after the trucker protest. Here is another opportunity for Americans to stand strong and show support for limited government. You can show support by signing their petition, join them in Washington, DC, or better yet, cease all forms of electronic communication for those days. Do not use your cell phone, the internet or other electronic communication media – TURN IT ALL OFF. Let the government hear silence from America.

If these events cannot stir America to action, Larry Klayman has set a November 19, 2013, date for all Americans to descend on Washington, DC, en masse to demand “that he leave town and resign from office if he does not want to face prison time for pushing ‘his Muslim, socialist, anti-Semitic, anti-Christian, anti-white, pro-illegal immigrant, pro-radical, gay and lesbian agenda.” Naturally this refers to the fraud in the White House, but I say it also refers to any of his appointees, Department heads, Supreme Court justices and members of Congress. The article by Tim Brown identifies Larry Klayman as the founder of Judicial Watch and the attorney who has submitted numerous cases against Barack Obama’s eligibility to hold the office of the presidency.

Here it is America – two months; two months of time that millions have to exact a positive change for this country. We are millions; the government is our creature. Are we to stand tall, proud and in support of our founding and Constitutional republic or are we to hang our head in acceptance of oppression, tyranny and persecution? Can our country last another year til election time? Can we even trust that elections are honest at this point? Americans cannot trust the lamestream enemedia to disseminate the truth. Responsible, truthful, ethical journalism has already become extinct in regards to the MSM. Government seeks to block bloggers and others providing truthful information with opposing opinions from distributing their works.

Many comments have been posted all over the internet by citizens who are ready to go if they only had a leader. Well, here are three, count them three, events being led by individuals and groups who are saying, “Enough is Enough” to the government. If you are ready to go, then join in and go. If you can’t go, protest in support wherever you are.

The Tyranny Clock is winding down. The needle has moved to almost midnight and the seconds are quickly ticking away. Once it strikes midnight and the alarm goes off, we will be observing an America that will be “new” and “fundamentally changed.” Our Constitutional republic will have gone the way of the Dodo bird.

Convention of the States – Good or Bad?