Did FBI Agents Dispose of Bullet Casings from Shots that were Fired at LaVoy Finicum’s Truck?

Bullet casings from rounds allegedly fired from an FBI agent at LaVoy Finicum’s truck back on January 26, 2016 have conveniently vanished into thin air following a FBI investigation of itself.

We reported to you earlier that at least one FBI agent was alleged to have been under investigation by the FBI for firing two shots in the direction of the truck at the time it averted a road block and slammed into a snow bank, although the FBI special agent in charge claimed he didn’t know who he was investigating because he didn’t know who fired. Yes, he actually said that!

“The question of who fired these shots has not been resolved,” said Greg Bretzing at a press conference.

You couldn’t make this stuff up any better in an episode of Keystone Cops. The reason they claim not to know is that neither the weapons nor the ammunition was inventoried on the day of the shooting. Who is not doing their job, is my question; or, who is attempting a coverup inside the FBI? I’ll have more on that in my next article.

Second, we know the FBI was also alleging that they were investigating four other agents in connection with shooting, but wouldn’t say why.

However, it appears now that the agents may have conspired to make the bullet casings from their fellow agent disappear in order to cover up the unlawful shooting.

Five FBI agents assigned to the traffic stop told investigators that none of them fired at Finicum’s Dodge pickup after it crashed at their roadblock. Oregon investigators, however, concluded that one agent fired twice at the truck, hitting it once in the roof and missing on the second shot.

FBI aerial surveillance video shows that before the detectives could get there, the FBI agents searched the area with flashlights and then huddled, according to law enforcement sources who have seen the video. The group then broke and one agent appeared to bend over twice and pick up something near where the two shots likely were taken, the sources told The Oregonian/OregonLive.

Barry Donegan at Truth in Media reports, “Police reports indicate that detectives showed up to collect evidence around 90 minutes after the moment in the surveillance video in which the FBI agent appeared to pick items up from the ground.” 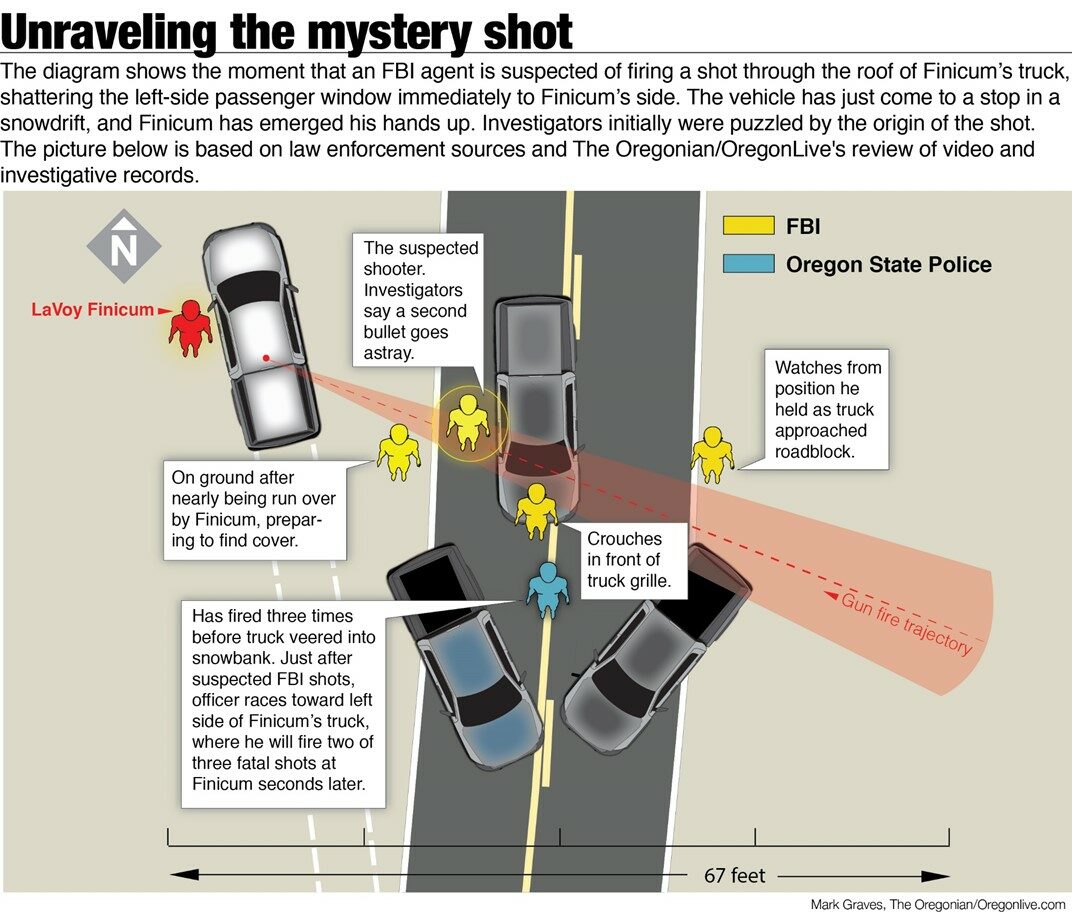 “All of the FBI agents on the scene that day claimed that they did not take any shots,” Donegan added. “A state trooper said he had fired three shots while the truck was speeding towards police and two more at Finicum as he was reaching into his jacket after he had exited the vehicle. Police inventory records show that the trooper was missing five rounds after the incident, apparently confirming his story. A fourth bullet hole in the truck came from a different angle of trajectory suggesting that an FBI agent had fired the shot. Investigators believe a second shot, which missed Finicum and did not strike the truck, was also fired by an FBI agent.”

Just last week, we learned that Finicum’s widow is filing a wrongful death lawsuit and that Bundy’s attorney has said that they were not given the truth at the FBI press conference following the shooting. It seems the further we go down this road, the more we are seeing that all the “authorities” surrounding the murder of LaVoy Finicum engaging in a criminal coverup, but in my next article, we’ll look at just how high up it actually goes.

We learned yesterday that Oregon State Police provided statements in which they knew the county that Finicum and his convoy were traveling to was a “UN free zone.” I thought all of America was supposed to be a UN free zone! Instead, it becomes clear that these officers are tied to the United Nations and that has an impact on the area. More than likely, they are buddy buddy with the Bureau of Land Management, who claim that their authority supersedes that of the US Constitution and are engaged in a large land grab for the end game purpose of advancing the UN’s Agenda 21 and milking the land for its trillions of dollars in resources.

Kathy Griffin Goes On PROFANE Anti-Trump Rant: ‘F— Him! I’m Not Holding Back!’

Kathy Griffin Goes On PROFANE Anti-Trump Rant: ‘F— Him! I’m Not Holding Back!’