On Wednesday, plane landing gear, thought to be a part of one of the jets involved in the September 11, 2001 attacks was found wedged between an apartment building and the proposed Ground Zero Mosque in lower Manhattan, according to police.

Deputy Commissioner Paul Browne said that the debris was stuck between the back of 51 Park Place and the rear of 50 Murray Street.

“The NYPD is securing the location as it would a crime scene, documenting it photographically and restricting access until the Office of the Chief Medical Examiner completes its health and safety evaluation protocol, after which a decision will be made concerning sifting the soil for possible human remains,” Browne said in a statement. “The aircraft part will not be removed until the process is completed, at which point it will secured by the NYPD Property Clerk.”

According to Browne, the debris has a clearly visible Boeing identification number and was found by surveyors who were hired by the owners of the property.

“We are cooperating fully with the appropriate authorities to make sure this piece of evidence is removed with care as quickly and effectively as possible,” said Sharif El-Gamal, the president of Soho Properties. 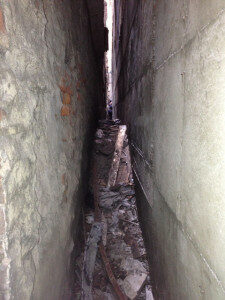 USA Today adds, “The odds of it entering that space at exactly that angle that would permit it to squeeze in there … it had to come in at almost precisely the right angle,” a police spokesman told The New York Times. Investigators are considering the possibility that it was deliberately stuck in the spot, CNN reports.

“We are also looking into a possibility it was lowered by a rope,” said NYPD commissioner Raymond Kelly, who noted that some rope seemed to be wrapped up in the landing gear.

Still, “if you see how confined this space is, and you realize the chaos that existed on this street, I think (the situation is) understandable,” Kelly said.

The wall doesn’t bear any marks suggesting the piece was lowered, he noted.

This seems a clear omen and reminder of why the Ground Zero Mosque should be openly opposed and that the people of New York should demand that their officials put a stop to this building, though I’m guessing the New York officials are simply complicit in the matter of aiding and abetting the same totalitarian death cult, Islam, that was claimed by the very people that have attacked New York City and America. It seems these people just don’t know how to deal with Islam. So they welcome those who wish to dominate them into their city and state with open arms and even allow them to erect a building to their false deity in the vicinity of the site where their brethren murdered nearly 3,000 people on September 11, 2001.

When I posted my petition as a step for dealing with Islam in America, I got thousands of likes and shared across a broad spectrum of the internet, but sadly people are just not willing to put their name on the dotted line because they are scared of the government or they are capitulating on what Islam is. Frankly, it’s disheartening to not see all those thousands of people adding their names to get the petition out in the open, but such is the way in which America has been seduced by Islam.

Janet Napolitano To Resign From DHS